How politicians showed off their books at the Democratic National Convention 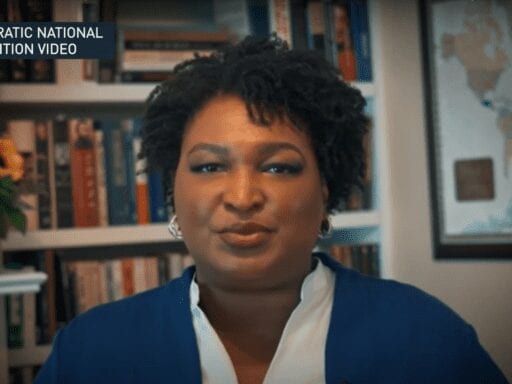 The credibility bookcase has become a fundamental part of image-making. Here’s how it worked at the DNC.

Quarantine has brought one single, simple joy into our lives, and it is this: Snooping on celebs and their taste in books.

At the 2020 Democratic National Convention, most official speakers appeared before DNC-provided backdrops, often featuring their state flags or other patriotic memorabilia. So what has come to be called the credibility bookcase was not much on display during the big dramatic addresses. (Notable exceptions among the keynote speakers were Michelle Obama and Hillary Clinton, who spoke from their living rooms. While they did have books in the background of their videos, the contents were too blurry for your humble correspondent to identify the titles.)

But the convention also featured a few informal pre-shot montages, and those videos showcased bookshelves galore — and plenty of opportunities for analysis. Let’s dive in.

Stacey Abrams gets points for sunflowers

Former Georgia Representative, lawyer, and romance novelist Stacey Abrams spoke at the convention on Tuesday night, and she represented with not only a bookshelf but also a charming sunflower arrangement. (We are no Room Rater but we do offer bonus points for nice flower arrangements.) Notably, she had Ron Chernow’s biography of Ulysses S. Grant hovering just above her ear in what was the second Chernow cameo of the week. (The first came on Monday, and we’ll get to it below.) Her shelf was also studded with telltale orange-and-white Penguin Classics spines, indicating a fair amount of fiction. No romance novels were immediately visible, but Abrams has already proven her bona fides in that category. She’s a professional author, so her credibility bookcase has true, authentic credibility: It can’t be purely for show because Abrams manifestly works with books. This is a harmonious and well-balanced bookshelf, indicating both gravitas and an ability to enjoy oneself.

Let’s move along to some of the candidates from primary season, who appeared before their various bookshelves to endorse Joe Biden over the course of the week. They offer a prime chance to see how a group of erstwhile presidential hopefuls are presenting themselves as they pivot to the general election.

Sen. Klobuchar helpfully stood flush with her bookshelves, so we can really get in there and go to town. Her shelf features the classic politician go-to choices of political biographies and memoirs, including Ron Chernow’s George Washington, Jimmy Carter’s A Call to Action, and a biography of Eleanor Roosevelt. Notably, her collection also includes the Margaret Thatcher biography The Iron Lady and Hope in the Struggle, a memoir by the activist Josie Johnson. The Johnson memoir seems to suggest a flirtation with progressivism that the Thatcher biography would then counter out, but perhaps Klobuchar wants to suggest an identification with any woman in politics, political affiliation aside. Notably, this is the kind of blurring of feminist ideas, in which any powerful woman can become a feminist role model now matter how many dubious things she does, of which Klobuchar’s supporters were often accused during the primary.

Klobuchar is also gesturing at an artsy side here, with books on Picasso and Van Gogh just behind her shoulder, and Shakespeare and an anthology of Fitzgerald’s short stories lurking prominently. Plus, she has a copy of On Film-Making: An Introduction to the Craft of the Director. Perhaps this is a reminder that Klobuchar has been active in trying to legislate arts relief bills during the pandemic, arguing that the American arts are one of the US’s most valuable exports.

The top left corner, which is studded with the orange-and-white spines of Penguin Classics, seems to be Klobuchar’s fiction section. Most of the titles are too blurry to make out, but I’m 80 percent certain I see an Agatha Christie, most likely Postern of Fate. A classic and unimpeachable mom choice, and part of the Midwestern mom vibe that helped build the Klobuchar base.

And what is that there on the right just above Klobuchar’s shoulder? It appears to be a shiny copy of 50 States, 5,000 Ideas, a travel book that will guide the reader across the United States. Amy Klobuchar: Like all of us, she just wants to get out of quarantine and go on a trip.

Beto O’Rourke is the coolest dad in the PTA

O’Rourke’s framing gives us the full benefit of his voluminous book collection, plus the vinyl and — arguably even more old-school — CDs. He’s going for breadth over depth here so we can see just how many well-worn books and records he keeps around and intuit that O’Rourke is a well-rounded and cosmopolitan Renaissance man who is genuinely devoted to the arts. But a few titles are visible, most notably a book on Bob Dylan and Ken Burns’s baseball book, and they both serve to cement O’Rourke’s position as the coolest dad ever to break out the acoustic guitar at their child’s sleepover.

Cory Booker is being slick

The books on the chest of drawers behind Sen. Booker are too far away for their spines to be legible, but check out the two books on the table peeking coyly over his shoulder. That is some deliberate placement if we snoops have ever snooped it!

The bottom book is the seminal mass incarceration analysis The New Jim Crow, which Booker has discussed before. He told the New York Times in 2016 that he gave copies of it to his entire staff, and then he teamed up with Sen. Tom Harkin to buy copies for everyone in the Senate. This is Booker reinforcing the message he repeated in his Biden endorsement: that he is committed to fighting against systemic racism and that he will hold Biden accountable to his commitment to do the same.

The red book on top of The New Jim Crow was a little harder to ID. I spent an entertaining couple of hours speculating that it might be the beloved neurodivergent-child-solves-the-mystery-of-life novel The Curious Incident of the Dog in the Night Time, or perhaps the recent addiction memoir Jesus Goes to Hollywood (Senator, what message are you trying to send???). But I’m nearly certain the actual answer is much less fun: Cory Booker’s second choice after The New Jim Crow is almost surely The Road to Character by noted Booker supporter David Brooks. And for the record, Brooks thinks so too.

I think Booker had Road to Character over his shoulder. I call on delegates to go rogue and switch the nominee! pic.twitter.com/kibfHba2KN

Booker may have found the next step forward for the credibility bookcase: It’s not just a place to show off one’s smarts, but also a place to scratch the back of a prominent supporter. If so, perhaps we can expect to start seeing The Art of the Deal show up on the credibility bookshelves of GOP speakers across the country as the Republican National Convention kicks off. But that’s an issue for next week.

Did a flight attendant see 16 migrant children on a flight from Phoenix to Miami?
The policing reforms in the Breonna Taylor settlement, explained
Mobile, Alabama, high school football game shooting: what we know
Judge bars Paul Manafort from wearing a suit at court hearings
How to help a friend through a tough time, according to a clinical psychologist
About that fly in the vice presidential debate