How Republicans are using the language of #MeToo against Democrats 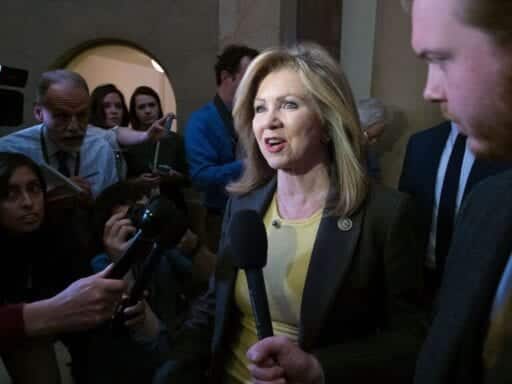 “What a hypocrite,” the campaign ad proclaims.

The ad shows Sen. Bob Menendez (D-NJ) giving a speech to the Senate about the women who accused Supreme Court Justice Brett Kavanaugh of sexual misconduct. “When will we as a society begin to believe women?” Menendez asks.

“What about the underage girls who accused you?” the ad’s narrator replies.

There’s just one problem: No underage girl has publicly accused Menendez of anything.

The 60-second spot, paid for by Bob Hugin, Menendez’s opponent in a tight race this year, revives claims from 2012 that Menendez had slept with underage sex workers. But these allegations came from a pseudonymous tipster, and an FBI investigation failed to substantiate them — no underage sex workers ever came forward to say they’d had sexual contact with Menendez.

The Hugin ad is one of a number of attempts by Republicans to use the #MeToo movement against Democrats by calling attention to allegations from their past. “Republicans are losing women very badly,” Democratic pollster and political strategist Celinda Lake told Vox. By invoking #MeToo, “they’re trying to strip Democrats of an advantage.”

Democrats have been far from perfect when it comes to addressing sexual misconduct allegations against their own, but at least they’ve begun to wrestle with the issue. Hugin and others on the Republican side, meanwhile, still seem interested in speaking out against harassment only when it serves their political ends.

Republicans are trying to weaponize #MeToo

The Hugin spot is based on allegations against Menendez that surfaced during his reelection campaign in 2012, as Salvador Rizzo notes at the Washington Post. That year, a tipster going by the pseudonym Peter Williams (apparently a reference to a New Jersey senator who was convicted of bribery in 1981) emailed the nonprofit Citizens for Responsibility and Ethics in Washington (CREW) to say that Menendez had engaged in sex with underage prostitutes. He also forwarded the group an email from someone going by the initials M.C., who he said was a prostitute who said she had witnessed Menendez having sex with prostitutes as young as 16.

CREW passed on the information to the FBI, which performed an investigation. But Williams declined to be interviewed by the bureau, and he did not offer enough information to identify any underage prostitutes. The FBI found no evidence to substantiate his claims, Carol D. Leonnig and Ernesto Londoño reported at the Washington Post in 2013. Instead, the bureau found evidence that Cuban agents had made up Williams as a way to smear Menendez, who had been critical of the Cuban government.

There’s plenty for Hugin to attack about Menendez. He was indicted on corruption charges in 2015, and his trial ended with a hung jury and mistrial last year. But at least as of now, the sexual misconduct allegation was never credibly substantiated.

Crucially, no women ever came forward to report that they had engaged in sex with Menendez while underage. In this case, there are no identified women to believe.

Hugin, meanwhile, is no champion of women, Sandberg said. The former New Jersey finance director for Donald Trump’s presidential campaign “stood by Donald Trump after he bragged about assaulting women” on the Access Hollywood tape, Sandberg said. “He stood silent when the accusations against Brett Kavanaugh came out. He to this day has not said if he even believes Christine Ford.”

Hugin’s ad is not the only example of Republicans using the language of #MeToo. During the Kavanaugh hearings, Rep. Marsha Blackburn (R-TN), who is running for Senate, took her opponent Phil Bredesen to task for his handling of sexual harassment in state government when he was governor. When asked about Kavanaugh in a debate, Blackburn took a shot at Bredesen: “When Phil was governor there was an issue where sexual harassment claims doubled one year,” she said. “And what they chose to do was to shred some of the documents so that women’s voices would never be heard. They died in that shredder and their voices were not heard.”

According to PolitiFact, notes relating to harassment allegations against a Bredesen adviser and a corrections official were destroyed while Bredesen was governor in 2005. The adviser was demoted; the corrections official resigned, though the governor’s office attributed his departure to reasons other than the harassment claim. Bredesen issued a new policy in August 2005 requiring that all records be preserved. The Nashville Women’s Political Caucus praised Bredesen, with its chief lauding his “swift actions in the workplace harassment case involving one of his legislative lobbyists and his open concern for protecting complainants’ rights.”

In response to a request for comment, a spokesperson for Bredesen’s campaign pointed Vox to the candidate’s response in his first debate with Blackburn: “We encouraged people to come forward and I’m glad that the number of reported cases where people came forward increased in that process.”

“The only shredding was to protect the privacy of the victims of sexual harassment,” says Gina Lodge, who served as commissioner of the Tennessee Department of Human Services under Bredesen, in an ad released by the Bredesen campaign.

Meanwhile, supporters of Rep. Jim Renacci (R-OH), who is running to unseat Democratic Sen. Sherrod Brown, have started a Super PAC called “Me Too Ohio,” according to Cleveland.com. In September, the group ran ads drawing attention to abuse allegations made by Brown’s ex-wife, Larke Recchie, during their 1986 divorce. The allegations were serious — Recchie said in an affidavit in the divorce case that Brown had “struck and bullied me on several different occasions.”

“I am definitely afraid of my husband,” she said in the affidavit.

Brown has denied the allegations, and in 1992, Recchie said that the divorce had led only to “angry words,” not physical violence. “I was proud to support Sherrod in 2006 and 2012 — just as I am this time around,” she said in a statement in September. “Disparaging my family for political gain is disgusting, and Congressman Renacci should know better.”

Recchie has also recorded an ad pushing back on the Me Too Ohio campaign. “Divorce can be difficult and ours was no different,” she says in the ad. “But the political attacks against our family are just wrong.”

A spokesperson for the Brown campaign said that Recchie’s statements are the campaign’s official response to Renacci’s allegations.

Recently, Renacci added a new and far more amorphous claim — he told the Cincinnati Enquirer earlier this month that multiple women had reached out to his campaign to say that Brown had assaulted them. He did not offer any evidence or specifics, and no women have come forward to report assault by Brown.

In all these cases, the Republicans using the language of #MeToo supported Kavanaugh’s confirmation. On October 5, after Christine Blasey Ford had testified before the Senate Judiciary Committee that she was “100 percent” sure Kavanaugh had sexually assaulted her, Hugin tweeted, “Based on everything I know now, I would support Judge Kavanaugh as Senator.”

Blackburn has expressed support for #MeToo, telling the Washington Examiner, “Our daughters and our granddaughters are going to feel empowered to stand up and say to a human resources director or to someone, look: ‘I want to report this.’ And, they know that they’re going to be listened to when they report it.”

But of Ford’s report of her experience, Blackburn said that while “there’s no doubt that something traumatic” happened to Ford, “since there is no specificity on date, time, and place, since there is no one — no one — to corroborate her story, then why would this [be] assigned, without any corroborating evidence, assigned to Brett Kavanaugh?”

Renacci, meanwhile, told Cleveland.com in an October 5 interview that Kavanaugh “has done so much good, and we’re going after him for unsubstantiated claims.”

”Dr. Ford’s claims haven’t been substantiated,” he added. “The only thing people from Ohio are claiming is that this is ridiculous.”

In a debate earlier this month, Renacci said, “my opponent, Sherrod Brown, has a voluminous record, substantiated claims of abuse.”

”The people of Ohio need to look at that abuse and understand it,” he added.

It’s not clear why he believes Brown’s ex-wife’s claims are substantiated and Ford’s are not.

Republicans using the language of #MeToo likely have two goals in mind, Lake said. First, they’re “trying to mute the advantage that Democrats have among women.” As the Examiner notes, Blackburn’s race against Bredesen is surprisingly close for reliably red Tennessee, and Blackburn has struggled with women voters in the Nashville and Memphis suburbs. Bredesen, it’s worth noting, ultimately came out in support of Kavanaugh’s confirmation.

Second, Lake said, Republicans may be trying to appeal to late-deciding voters who care more about character than issues by painting their Democratic opponents as untrustworthy or hypocritical.

Ultimately, focusing on harassment allegations may not work particularly well for Republicans. In public opinion polls, Democrats have “a huge advantage” when it comes to sexual harassment and #MeToo, Lake said. They’ve been far more consistent than Republicans in backing zero-tolerance policies for sexual harassment and ending the use of taxpayer money for harassment settlements, positions that are “wildly popular” with voters.

When Republican candidates try to use #MeToo to attack Democrats, Lake said, “there may be a race or two where it works, but in general, this is a pretty desperate, flawed strategy.”

The Democratic Party has at least begun to reckon with harassment. The Republican Party hasn’t.

The Democratic Party certainly doesn’t have a spotless history when it comes to sexual harassment and assault. House Minority Leader Nancy Pelosi responded less than forcefully when Rep. John Conyers (D-MI) was accused of sexually harassing former staffers, calling him “an icon” and asking, “Was it one accusation? Is it two?” She later called on him to resign, and he announced his retirement in December 2017. Sen. Al Franken (D-MN) was only pressed to resign by his fellow senators when claims against him became too numerous to ignore.

Bill Clinton faced allegations of sexual assault, and admitted to an affair with Monica Lewinsky while he was president and she was an intern. Hillary Clinton can’t be held responsible for her husband’s actions, but her recent public statements show a failure to fully understand the abuse of power involved — and she made her own missteps when it came to dealing with harassment allegations against an adviser.

Democrats certainly deserve criticism for these and other lapses. But at least so far, Republican candidates largely seem interested in speaking out against harassment and assault as a way to score political points. They’re attempting to thread a needle on Ford — claiming to believe she was assaulted but not that Kavanaugh was the perpetrator, even though Ford says she is “100 percent” certain of his identity. And then they’re criticizing Democrats for failing to “believe women” — sometimes when no women have even come forward.

Hugin, Blackburn, and Renacci are trying to have it both ways on #MeToo. They’re using the language of the movement to try to curry favor with female voters and slam their opponents, but they failed to support a woman when she spoke out against one of their political allies.

There will be times, for both parties, when supporting women who report sexual misconduct will be politically inconvenient. Democrats have already seen that with Franken. Republicans, however, have yet to accept this reality. For them, #MeToo remains little more than a political tool — something they can use to attack their opponents, and simply put away when it’s no longer needed.

A US charity tries something new: letting poor kids choose their donors instead
No Republicans support Senate bill that would stop child separations at border
The State Department is telling US tourists that El Salvador is now as safe as Denmark
Tom Steyer’s push for term limits is a truly awful idea
7 coronavirus cleaning questions, answered by an expert
6 things to know about Peacock, NBC’s new (free) streaming service