How the 12 Thai boys were finally rescued 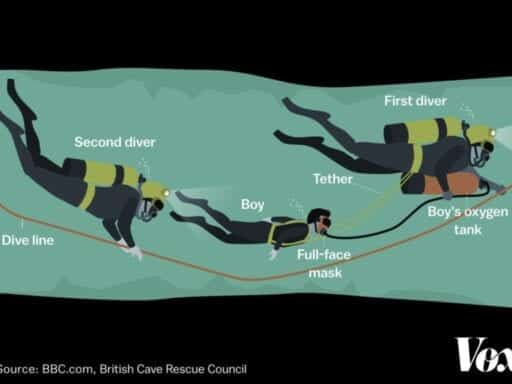 Paired with pro divers, the boys swam and climbed 2.5 miles through narrow passageways with near-zero visibility.

The 12 Thai soccer players and their coach who have been trapped in a cave in northern Thailand for more than two weeks have all been rescued. “We are not sure if this is a miracle, a science, or what. All the thirteen Wild Boars are now out of the cave,” the Thai Navy SEALs posted on their Facebook page.

The dramatic story of the boys who hiked into the Tham Luang Nang Non cave system on June 23 and then were trapped by floodwaters has riveted people around the world. It took an increasingly happy turn over the last three days, as an international team of divers brought out the boys in three stages. Tuesday’s rescue mission succeeded in retrieving the last four boys and the coach. The boys are in good overall health, according to the Ministry of Public Health.

But the rescue saga is not quite over yet; a doctor and three Thai Navy SEALs are still in the cave.

The group was found trapped in the flooded area half a mile below the surface by two British divers a week ago in a chamber some 2.5 miles from the cave’s mouth.

Guiding 12 boys through these narrow passageways, some of them partially or fully submerged in water, at first seemed to rescuers like a near-impossible task since it initially took the rescuers five hours to make the journey one way. But the rescuers began to teach the boys, between the ages of 11 and 16, to swim last week before the rescue mission began. (The coach also taught them to meditate to keep calm.)

By Sunday the journey seemed more feasible because the rescue team was able to pump at least 40 percent of the water out of the cave. It was so much water that farmers’ fields nearby flooded.

How did the rescuers do it?

The diving rescue team is comprised of 13 foreign divers and five members of the Thai Navy SEALs, according to Reuters. The team began its first attempt on Sunday, matching two divers per boy. The boys were equipped with full-face masks, which are specifically designed for beginner divers. And the pros who accompanied them carried their oxygen tanks.

“They are forced to do something that no kid has ever done before,” Ivan Karadzic, a diver on the rescue team, told the BBC. “They are diving in something considered an extremely hazardous environment in zero visibility. The only light that is in there is the torch light we bring ourselves.”

The first part of the 2.5-mile journey required wading and diving through the flooded passages, according to ABC Australia. Next came a 1-mile climb over slippery rock, with ropes for assistance.

Some of these channels were too small for the boys to swim through while wearing their gear, so they had to take them off and pass them to the diver ahead of them.

CNN described how they were able to maneuver out of these channels:

The most dangerous part of the journey out of the labyrinth cave system is the first kilometer, during which they are required to squeeze through a narrow flooded channel.

Rescuers need to hold the boys’ oxygen tanks in front of them and swim pencil-like through submerged holes. Having completed this section, the boys are then handed over to separate, specialist rescue teams, who help assist them through the remainder of the cave, much of which they can wade through.

CBS reported that the most dangerous part of the journey was traversing a “pinch” point that is only 15 inches wide. Because it’s so narrow, the boys had to separate from their chaperones there. This was risky given that the section was nearly pitch black.

Overall it took about nine hours for divers to get the first group of four boys out of the cave.

To gain a sense of what it was like inside the cave, check out this video SpaceX CEO Elon Musk posted on Instagram:

Just got back from Cave 3

“The operation went much better than expected,” Chiang Rai acting Gov. Narongsak Osatanakorn said, according to the Associated Press.

The second mission, which began at 11 am local time on Monday, resulted in four more boys emerging from the cave. And Tuesday morning’s mission for the last four and the coach took just eight hours.

Edd Sorenson, a member of the National Speleological Society-Cave Diving Section, told Vox that dry rescues like this one — where the trapped people are not fully submerged — are usually safer than wet rescues. But this rescue has been complicated by the flooding.

“Water can be very violent, and this is a very difficult [cave rescue] because of the extreme high flow, the zero visibility, the boulder pile chokes, restrictions,” he said.

As the boys emerged from the cave, they were brought to ambulances, then to evacuation hospitals, which flew them to the Chiang Rai Prachanukroh hospital. They must be quarantined for a few days until doctors can be sure that they haven’t caught any transmissible diseases from their time in the cave. As a result, they have not had a chance to see their worried parents.

DOJ has officially abandoned Trump’s effort to repeal Obamacare by judicial decree
Kamala Harris was the Democrat you could imagine taking on Trump
Pete Buttigieg’s McKinsey problem, explained
Hollywood almost lost to this city
“I don’t want to be a depressing drumbeat”: TV comedy legend Greg Daniels on his daring new shows
How the Covid-19 pandemic will leave its mark on US health care