How the Sears catalog transformed shopping under Jim Crow, explained by a historian 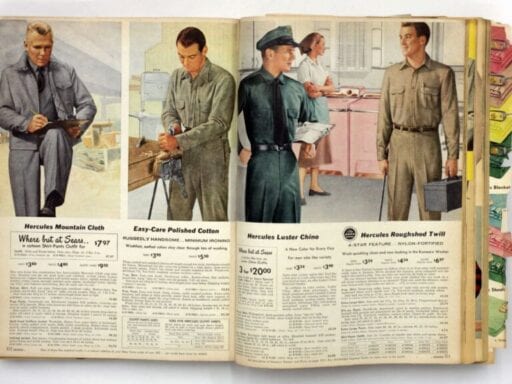 Sears, the once-iconic American retailer known for its catalogs, filed for bankruptcy this week. The company is closing more than 100 stores across the country, but several hundred more will remain open.

Before Sears was a department store, it was a mail-order retailer that gave people in far-flung parts of the country the opportunity to shop like their city-dwelling counterparts. Its long, slow decline arguably began in the 1980s and was exacerbated in the years surrounding the 2008 financial crisis.

Most experts blame Eddie Lampert, a hedge fund executive who served as the company’s CEO from 2013 until this week and had no prior experience in retail, for purportedly treating the store like a financial services company and essentially running it into the ground. Before Sears was gutted by venture capital, though, it transformed the American retail landscape by giving people in rural areas who could otherwise only shop at general stores the ability to buy nearly anything, from watches to guns to entire prefabricated homes.

In a fascinating Twitter thread, Louis Hyman, a work historian at Cornell University and the director of the Institute for Workplace Studies, delved into a lesser-known aspect of Sears’s history: It gave black Americans under Jim Crow, especially those who lived in the rural South, the ability to shop as freely as white people. I interviewed Hyman on the Sears catalog’s history as both a capitalist endeavor and an unintentionally anti-racist one.

People in cities, I assume, could buy things at department stores or other businesses. But what was shopping like in rural areas before Sears?

If you were a tenant farmer or a sharecropper, which was the dominant kind of work for African Americans and for many whites, you lived on credit. You weren’t paid until the harvest came in, and you had to borrow an account from that store. You’re basically locked into this monopolistic relationship with one store that controlled all of your credit.

Did these stores have high interest rates?

There were no interest rates, but there was something called the “credit price,” where you were charged extra. People often ended the year in the red.

This is where the system of debt peonage really emerges in the South, as a way of controlling African Americans from Reconstruction and until the 1950s. One person would own a lot of land, and you could either rent it as a tenant farmer or a sharecropper. With tenant farming, you could rent it for a price, and with sharecropping you gave a part of your harvest.

You basically made no money; you were locked into place. And black people were told they couldn’t leave [that land] until they paid off their debts, so they were locked into a certain farm, a certain store, for their lives. They were trapped in debt from year to year.

It wasn’t like going to Target now with your AmEx and getting to decide what you’re buying. All the white people would be served first. You would say, “I want to buy this,” and the storekeeper could say yes or no — and it would be different, what white people and black people were allowed to buy. That kind of system was part of the everyday reinforcement of difference, which was intended to create racial hierarchy and remind people of that basic power differential, whether it was political or economic.

We often talk about Jim Crow as the political disenfranchisement of African Americans, starting with the Mississippi Plan in 1890 [which disenfranchised black people in the state]. But before that political difference, there was a need to reinforce racial difference and racial control over space. In the 1880s, you start to see various ways in which white people began to push back against the Civil Rights Act of 1875, which guaranteed African Americans equal access to [things like] trains, restaurants, theaters, and hotels.

I think that’s the scariest part — to realize that Jim Crow wasn’t a holdover from slavery. It was something that was created 30 years after slavery ended. It really challenges this progressive narrative of greater freedom that we have about our country.

And this everyday violence was a way of reinforcing the larger political project of Jim Crow.

It’s one thing to be told you have to wait until all the white people are served before you are. But if you don’t do that, you could be lynched, your family could be killed, you might be denied food or clothes for your baby. It’s extralegal violence; there is no recourse. In the beginning of the 1890s, there’s a thing called “spectacle lynchings” that begin in Paris, Texas and then spread across the country.

Right. If you went to a five-and-dime, you could buy postcards of lynchings. Train companies sold excursion fares for thousands of people to attend these spectacle lynchings. This is everywhere, and it’s part of how life worked. This is what was at stake with Jim Crow.

And it’s why the Sears catalog was just so radical. Something so innocuous as having a catalog where white people weren’t telling you what you could and couldn’t buy…

And Sears disrupted this unintentionally, right? They weren’t setting out to be a progressive company.

Sears wasn’t setting out to be the anti-racist catalog. It was setting out to replace Montgomery Ward [a mail-order retailer founded in 1872 that was Sears’s primary competitor].

Just to bracket Jim Crow for a second, Montgomery Ward started in the 1870s with a catalog, but it’s all cash. It was an amazing thing — there had been struggles, questions of how to sell to country people, since that’s where most Americans were. But how do you sell to them? How do you sell to them at city prices? It’s hard, because if you run a small store, they’re going to have to charge you higher prices than somewhere with a lot of volume selling. It’s the same today.

Montgomery Ward is the first to crack the code on this, to figure out how to sell things at a distance. If you had access to cash, you could buy [from them].

But the debt peonage relations meant that if you were a black sharecropper in the South, you didn’t have any cash. With Sears, they were like, “We’ll just let people get credit with us.” It was an amazing, kind of crazy thing to do in an era with no FICO scores or credit ratings. And unintentionally, they started to disrupt this Jim Crow system. Once they learned what was happening, they supported it.

Richard Sears and Alvah Roebuck were two white guys — they were just in it to make money. But Richard Sears eventually partnered with Julius Rosenwald, who was a Jewish suit maker in Chicago and who ended up being an extraordinary racial liberal. He founded the Rosenwald schools in the South, which educated black children in an era where black schools were chronically underfunded.

Was there pushback to all of this?

Sometimes the general store would also be the post office, so the guy at the general store would refuse to sell black people money orders or stamps to order out of the [Sears] catalog. So Sears actually put instructions in the catalog telling people how to directly approach the postman and ask him to place orders for them instead. We don’t know how often it happened, but it really speaks to how Sears tried to evade this system of Jim Crow capitalism.

There were rumors that Sears was black, that Roebuck was black. Montgomery Ward offered a cash reward for the person who started a rumor that [Sears] was a “mulatto.” The idea was to try and stop white people from ordering the catalogs. It wasn’t effective, but it does speak to how these issues of race and consumption were intertwined.

But even then, it wasn’t a moral thing — it was more about money.

I think a lot of retailers like the idea of providing high-quality goods at affordable prices. It doesn’t really have the gravitas of fighting white supremacy, I agree, but it didn’t really matter [what the motivation was]. What mattered was the experience for black people.

It wasn’t a self-conscious social enterprise that was designed to fight white supremacy; it was a way of making money. And it did make money! And it helped black people at the same time. Suddenly, you could buy anything. You could buy farm equipment, clothing, suits — nice, Chicago suits. And of course, you could buy guns! You could buy all sorts of things with the catalog.

It’s a very conservative act, just spending money. It’s a basic right as a consumer — but it’s also a pretty radical act. That’s also why the early Civil Rights movement targeted this aspect of Jim Crow, and why it was so successful. This is why black college kids dressed in their Sunday best and sat down in Woolworths. People would go and say, “I just want to spend money, why can’t I spend money?” It was a pretty powerful argument. People are often down on neoliberalism, but this is part of what liberalism is: Markets connecting people.

It’s an incredible history. It challenges what we think about race and consumption, both on the left and the right. I think one of the things we have to do as historians is think about how things actually worked — what were the possibilities, both liberating and dominating, in the history of capitalism?

The ice we’ve lost to climate change this past decade, visualized
How the scrunchie rose and fell and rose again in popularity
These are the popular ideas progressives can win with (and some unpopular ones to avoid)
6 comic book callbacks from Watchmen’s series premiere
How ads follow you around the internet
Montana Gov. Steve Bullock has dropped out of the 2020 race, and says he won’t run for Senate