The Orionid meteor shower peaks this weekend. Here’s how to watch. 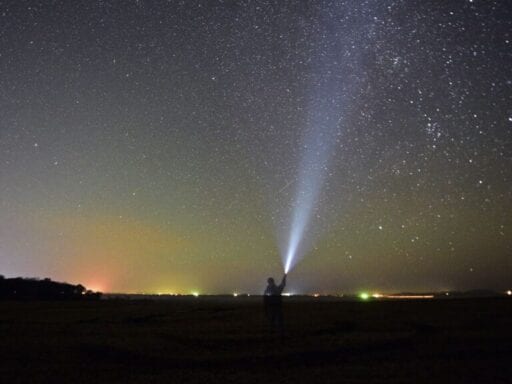 Earth is currently passing through a patch of debris created in the wake of Halley’s comet tail.

Halley’s Comet won’t make a full return to the skies until 2061. But tonight, you can catch a glimpse of it in the Orionid meteor shower.

Earth is currently passing through a patch of debris created in the wake of the comet’s tail. When that debris hits our atmosphere, it will burn up and spray the night sky with light.

This year, the shower will peak overnight Saturday into early Sunday morning, with 15 to 20 meteors per hour. If the skies are clear, some meteors will be visible Friday night into Saturday morning as well.

These meteors are named “Orionid” because they appear to emanate out of the constellation Orion, which takes the shape of a hunter wearing a most-fetching three-star belt. (Specifically, they appear to radiate from his “club.”) It’s one of the most recognizable constellations in the night sky.

We come across this patch of debris again in May, when the skies light up with the Eta Aquarid meteor shower.

NASA notes these are “fast” meteors, traveling at about 148,000 mph as they smash into our atmosphere. “Fast meteors can leave glowing ‘trains’ (incandescent bits of debris in the wake of the meteor) which last for several seconds to minutes,” the space agency explains.

You’ll want to be in as dark of a place as you can get to, like a park far away from city lights. Check out this light pollution map to chart out a dark place to watch. The Washington Post also has a handy map predicting what regions of the country will be free of cloud cover. Check it out.

And you don’t need to be looking directly at the constellation Orion to spot the meteors. They’ll be shooting off in all directions. But if you stay up past midnight, Orion will climb higher and higher in the sky, and the meteors will be easier to spot. Just before dawn — after the moon sets around 5 am — may be the best, darkest, time of all to watch. (Check when the moon sets in your area at timeanddate.com.)

Just find a dark spot, lie down, and look up. NASA suggests to generally gaze in a southeastern direction.

And bring a sleeping bag. It might get cold! If you miss this meteor shower, no worries. Next up are the Leonids, which peak around November 17.