How to listen to all of Vox’s Earth Month podcasts 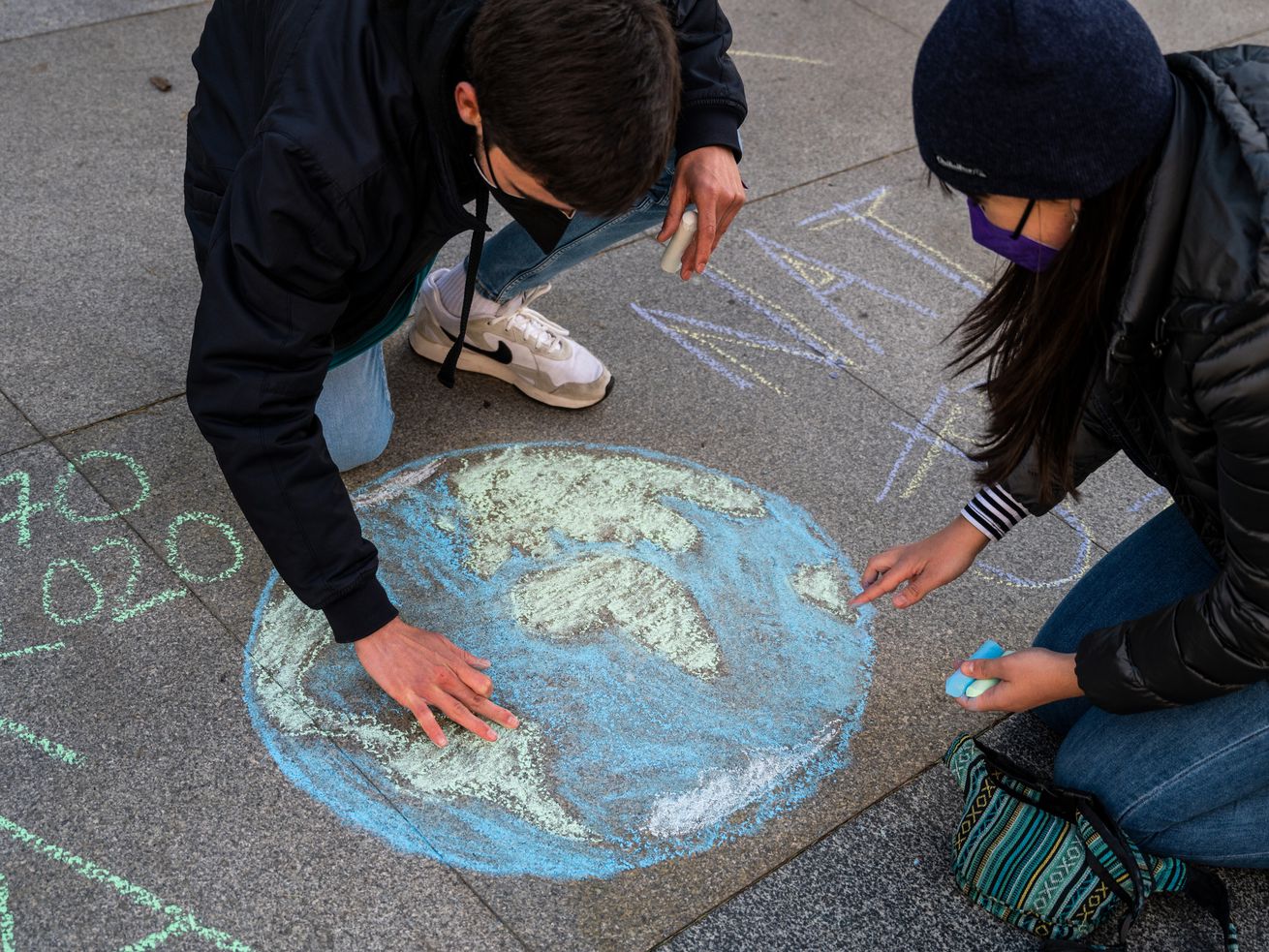 From climate change policy to clean energy technology, these episodes focus on ways to solve the environmental crisis.

This April, Vox’s podcasts are teaming up to cover some of the most important issues threatening life on Earth. From sustainability to biodiversity to straight-up cool things about the natural world, we’ll focus on our planet and its limits in episodes throughout the month.

We’ll tell stories about how a kayak changed one life to the trouble with gas stoves to how rising temperatures will change what food we have available to eat. And, of course, we’ll dive deep into policy — including a Weeds palooza with four promising white papers on the details of how we can bring down greenhouse gas emissions.

Tune into Today, Explained, Vox Conversations, The Weeds, Unexplainable, Worldly, Future Perfect, Recode Daily, and Vox Quick Hits to hear new Earth Month episodes every week. Below, you’ll find a guide to what’s coming up. Want to share all of the shows with your friends? Simply point them to vox.com/earthmonth.

It’s an all white paper episode, folks. Vox climate reporter Umair Irfan joins Matt and Dara to take on three research papers all concerning climate change: first, on the social costs of carbon; then on the disparate effects of temperature rise on a diverse array of geographic regions; finally, on global migration due to climate change.

Future Perfect: Engineering our way out of the climate crisis | 4/14

In an ideal world, cutting carbon emissions would be enough to stop global warming. But after dithering for decades, the world needs a back-up plan. Kelly Wanser is the leader of a group called SilverLining that works to promote research into what it calls “solar climate intervention.” Also called “solar geoengineering,” this approach involves putting particles into clouds that reflect back the sun, directly cooling the earth.

It’s a novel and potentially hazardous policy — but one that Wanser and other experts argue could hold a lot of promise as the world braces for catastrophic climate impacts. Wanser and Vox’s Dylan Matthews discuss how solar climate intervention works, how it could be implemented, and where it fits in with the goal of cutting emissions.

In partnership with Eater, we will take a look at how rising temperatures will change our food systems: from poisonous lettuce to the merits of jellyfish when all of the clams die.

Vox Quick Hits: Tell Me More: Will the superpowers unite on climate? | 4/19

The United States and China play leading roles in the global response to climate change: Together, they account for 43 percent of global carbon dioxide emissions. And it’s not just actions in their own countries that matter; they are highly influential in the world, too. Many industrialized countries look to the US for cues on climate action, and many developing countries look to China.

You may be under the impression that a gas stove is better than an electric stove, but that’s because the fossil fuel industry wants you to think that. Decades’ worth of campaigning and messaging has convinced the average renter and homeowner that gas stoves are the preferred choice. But really, they emit harmful fumes into your own home.

After a year of living through the Covid-19 pandemic, are political, business, and community leaders ready to get serious about climate change? A look at what can be done to mitigate the climate crisis.

Commercial marijuana production is increasing as more states legalize recreational use, but indoor weed farms have a significant impact on the climate. In fact, a recent study found that just an eighth of weed has a 41-pound carbon footprint. The solution? Finding a more climate-friendly way to grow marijuana, such as outdoor farms.

Future Perfect: Should I still have children if I’m worried about climate change? | 4/21

A conversation with climate scientist Kimberly Nicholas, who has a new book that touches on this question. Nicholas ran the original study that found having one fewer kid is one of the best things you can do for the climate — but she still encourages people who want to be parents to go ahead and have a kid.

Today, Explained: What about nuclear energy? | 4/22

Where does nuclear energy fit into the climate conversation? Why is it taking a bigger role in some countries’ energy policies and why is it not in Biden’s plan?

Recode Daily: What billionaires could be doing better to save the planet | 4/22

The number of billionaires spiked by 30 percent during the pandemic. What would be the most effective way they could spend their fortunes to fix climate change? We ask the experts.

Future Perfect: Sucking the carbon out of the sky | 4/28

A conversation with Akshat Rathi, a PhD chemist turned Bloomberg reporter and expert on carbon removal as an industry. What does carbon removal even mean? Can we even do that? How can this be used, particularly by the oil industry, for better or worse?

Vox Conversations: How to replace everything in the industrialized world | 4/15

If the entire world’s energy infrastructure is going to be switched over to clean energy sources in a matter of decades, that’s going to require an enormous amount of building; from electric vehicles to heat pumps to batteries to mass timber buildings to microgrids to electric cooktops, and on and on. It turns out we know quite a bit about how to accelerate technologies along those curves, and which technologies need help from which kinds of policies. Climate writer and Vox contributor David Roberts talks with Jessika Trancik, Associate Professor at the Institute for Data, Systems, and Society at M.I.T.

We’ll tackle the rise, fall, and then rise again of the electric car — and whether an all-electric car future is enough to reduce emissions.

After the winter storm caused blackouts throughout Texas in February, Tesla secretly did something unexpected: It plugged a giant battery into the state’s power grid. In many ways, the device sounds like a supersized version of the company’s Power Wall, batteries designed to turn houses into virtual power plants. It’s also the latest indication that Tesla is no longer just an electric car company; it’s an energy company that’s just getting started.

From cryptocurrencies to artificial intelligence language algorithms, big computing takes a lot of energy. Some transactions using cryptocurrency require as much energy as an EU resident uses in a month. Is there a way to make big computing greener?

Recode Daily: Remote work is here to stay. How do we make it sustainable? | 4/21

2020 changed how, and where, we work. When the pandemic is over, those who can work from home will likely do so two or three days a week, and a smaller share of workers — 15 to 18 percent — will be remote full time. This may seem like a clear win for the environment — fewer people commuting/driving to work, less of a need to heat/cool massive buildings, etc. — but it’s not quite that simple. We dig into how the convo about green/sustainable work environments is changing, now that where we work has changed.

The Weeds: How to build better transit infrastructure | 4/23

Matt Yglesias will talk with urban planner Eric Goldwyn, whose research concerns bus ridership in American cities, and who has recently been investigating a surge in bike use during the pandemic.

Vox Quick Hits: One Good Answer: Why it’s hard to talk about sustainability in fashion | 4/28

Only one out of the dozen or so most commonly cited facts about the fashion industry’s huge environmental footprint is based on any sort of science, data collection, or peer-reviewed research. The rest are based on gut feelings, broken links, marketing, and something someone said in 2003.

If we’re serious about recruiting the fashion industry into the fight to save our world from burning, these bad facts do us all a disservice. They make fashion activists look silly. They allow brands to wave vaguely at reducing their impact without taking meaningful action. And they stymie the ability to implement meaningful regulation, which needs to be undergirded by solid data.

Vox Conversations: Beloved Beasts: Fighting for life in the age of extinction | 4/22

A history of the modern conservation movement — told through the lives and ideas of the people who built it.

Phages are the most abundant biological entities on Earth (for every grain of sand in the world, there are a trillion phages), and we barely know anything about them. They contain 2 billion pieces of genetic code that exist nowhere else on Earth, and they kill half the world’s bacteria every 48 hours. Cracking their code could be critical to understand our biological ecosystem, but even more tantalizingly, phages may be the answer to a host of currently incurable diseases. By 2050, 10 million people are projected to die each year from antibiotic-resistant infections, and phages could be our last hope.

It feels like mushrooms are everywhere these days, but why? Vox culture reporter Terry Nguyen explains why mushrooms are super versatile, and how the fungi took over food, wellness, and (of course) drugs.

The Twilight Zone, a part of the ocean where light doesn’t go, might be helping to sequester huge amounts of carbon from the atmosphere. We don’t know — but we do know that we need to find out before commercial fishers start fishing there!

Over four billion years old, and we’re still learning new things about the planet Earth. We’ll explore some of the new things we’ve discovered about the Earth, and how we might save it from climate change.

Vox Quick Hits: The Best Money I Ever Spent: A kayak that made me appreciate where I come from | 4/8

When Max Ufberg left New York for Pennsylvania at the beginning of March in 2020, he assumed it wouldn’t be for long. But as weeks became months, he found solace exploring the place that he had once been so eager to leave behind.

Vox film critic Alissa Wilkinson and critic-at-large Emily VanDerWerff explain why Mother! is perhaps the weirdest environmental movie you’ll ever see. They dig into the plot, the allegory and the ways it can be interpreted.

Vox Quick Hits: Ask a Book Critic: How to make your home and garden greener | 4/21

Vox book critic Constance Grady recommends books that teach you how to make your home and garden greener.

Vox Quick Hits: The Best Money I Ever Spent: A HEPA filter for my parents | 4/22

After the California Camp Fire in 2018, Grace Linden’s parents did not purchase an air purifier — nor did friends, or friends’ parents, or anyone she knew. But that changed by 2020, after more devastating fires and a year of no control due to the pandemic.

Vox Quick Hits: Ask a Book Critic: Books that transport you to a new place | 4/27

Looking for something to read when you’re stuck with your family and they keep annoying you? Vox book critic Constance Grady recommends options to help you go on an adventure.

On climate change, oil and gas companies have a long way to go
2020 Democrats criticize Trump’s record on race at NAACP convention
The word “Orwellian” has lost all meaning
Trump got Pfizer to reverse its drug price hikes — but he gave up some big concessions
This popular and proven climate policy should be at the top of Congress’s to-do list
Billionaire Reid Hoffman, one of the most powerful Democratic donors, is raising money for Cory Book...