It’s time for a moratorium on police shooting videos 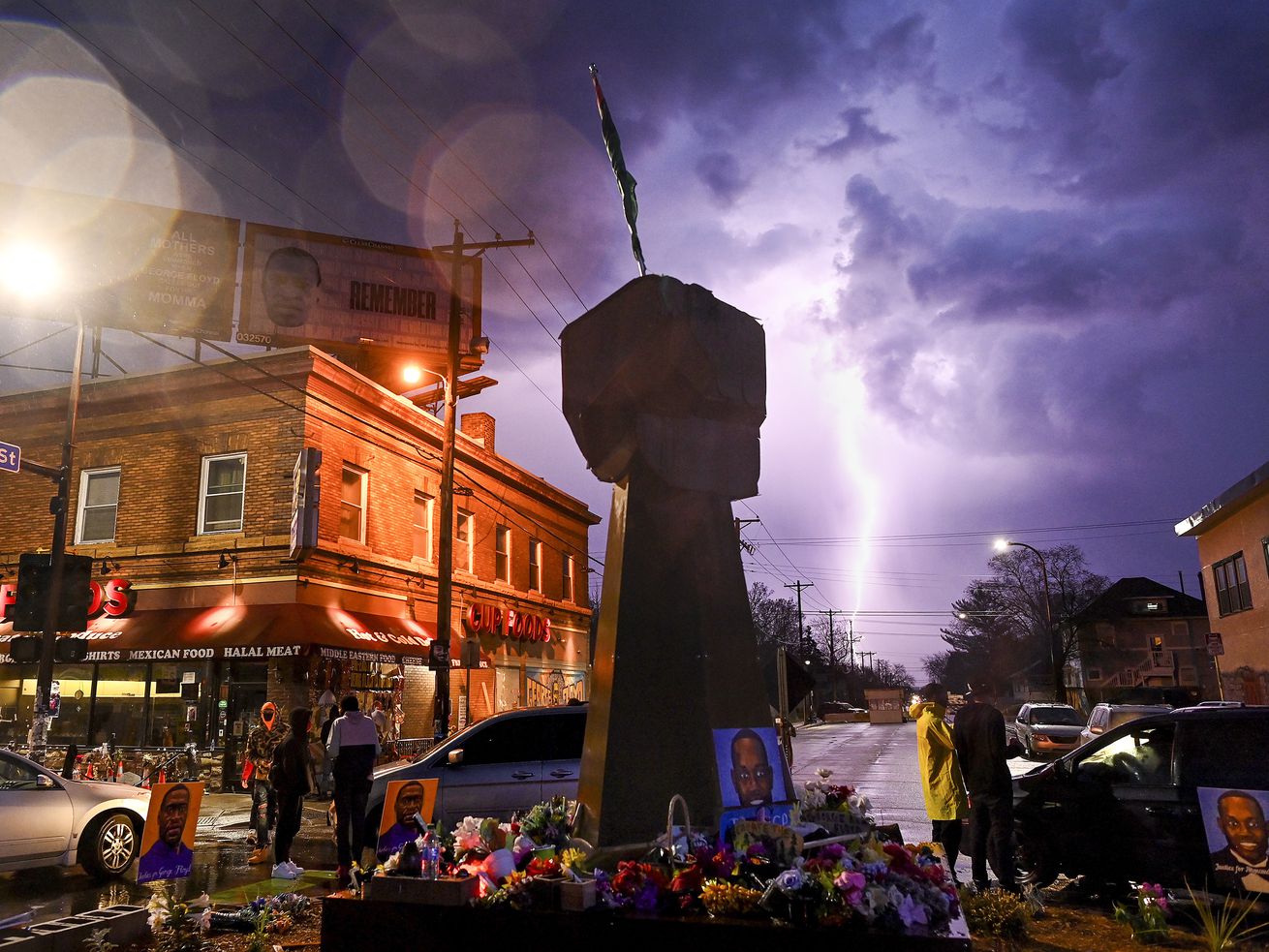 We have enough proof. What’s the purpose of sharing these violent images anymore, other than to traumatize Black communities?

George Floyd cried out for his mother in his final moments. Adam Toledo did not have time to.

Two deaths at the hands of police. One prolonged. The other sudden. Both tragic. These are the haunting bookends that modern footage of police brutality gave us in just the last week.

The final week of testimony in the trial of former officer Derek Chauvin began last Monday. To make their respective cases, both the defense and the prosecution looped traumatic videos of Floyd’s 2020 death in Minneapolis.

That same day, national news outlets began to report on Daunte Wright, a 20-year-old Black motorist whom Brooklyn Center police shot fatally on April 11 — just 10 miles from where Floyd took his last breaths. By Wednesday, I watched in horror as police pepper-sprayed 2nd Lt. Caron Nazario, who is Black and Latino, in his military uniform during a Virginia traffic stop. His video played repeatedly on all of the major cable networks.

And by Thursday, 13-year-old Adam Toledo, who is Latino, appeared on my TV and smartphone screen, holding his hands up to surrender to a Chicago police officer who shot him fatally in less than two seconds on March 29, tuning the scales of trauma to an unbearable pitch for so many.

What are we to gain, I asked myself, from the continued viewing of these videos? I’m a social scientist, so I think about this perhaps more often than most people. For the last 10 years, I have studied how African Americans use mobile and social media to document police brutality. Like many, I hoped initially that the rise in this documentation would lead to widespread policy changes across the country.

I thought that if people finally could see the true horror that many Black and brown people faced daily in their own communities, then change would come swiftly. In the same way that the civil rights movement gained steam because of the horrific Emmett Till photographs, I knew that there was power in having visual proof — or even a visual counternarrative when police lie, as they did with Toledo’s death and Laquan McDonald’s.

Last year was a breaking point for me, though. Seeing George Floyd dying on primetime television, over and over again, was too much. It felt voyeuristic — not valiant — because I realized that Black deaths were the only ones that the news media aired on TV.

Amid the global Black Lives Matter uprisings last year, I voiced concern for how news organizations were handling Floyd’s video. In magazines, on TV, and on the radio, I pleaded with journalists to consider the trauma that African Americans face when they see their loved one’s demise instant-replayed on TV, like sports highlights. I urged the public to think before posting Black death to their social media timelines. I suggested that people equate these fatal police encounter videos to modern-day lynching photographs, which deserve somber respect instead of casual viewing.

This message went viral. Journalists from around the world called and emailed me for advice about how to report on police brutality without showing these images. Many reporters asked me if a freeze-frame before the moment of death would be more respectful than showing the whole video. I remember offering a reluctant “yes.” But seeing the still frame of Daunte Wright terrified in his car, or witnessing Adam Toledo’s hands up in surrender, has changed my mind. Even the abridged videos have been traumatizing.

Last week, I realized that we have been asking the wrong questions all along. The questions never should have been, “Do we have a video of this police killing?” or, “Was the officer’s body cam on?” Instead, we should have been asking ourselves why we ever demanded that marginalized communities produce this kind of visual “proof” in the first place. Why were Black and brown people forced to pre-litigate their own murder trials in this way? Why was it necessary to form a counternarrative to the old stereotype of Black and brown folks’ criminality? Why did we ever need to produce a parallel storyline to an official police report?

This system of American policing has created a diabolical cycle of citizen witnessing. First, the cycle demands that a victim’s family share their loved one’s tragic last moments with the public. Then, it invites those moments to be picked apart, first by the news media and eventually a jury — and that’s if the case ever goes to trial. Finally, it leaves the slain to be entombed online, often without the family’s consent. Then, the cycle repeats with a new person, a new family, a new headline, and a new hashtag.

The center cannot hold. The same Black and brown communities that are being asked to remain calm, stay compliant, and endure stoically are the same groups who watched the January 6 siege on the Capitol unfold. They watched as white insurrectionists broke into a federal building — with the aid of many police who opened doors for them — and lived to tell about it. They watched, also, as another child — 17-year-old Kyle Rittenhouse, who is white — crossed state lines from Illinois to Wisconsin with the intent to shoot anti-police brutality protesters in August 2020. When Rittenhouse approached police, wearing an assault rifle and having killed two people, police gave him bottled water and later sent him financial donations for his legal fees.

For all of these reasons, I now believe that circulating videos of Black and brown death at the hands of police reinforces white supremacy. It does not deter it. These videos are no longer exposing a corrupt police system. They are a reminder of a social hierarchy that privileges police with qualified immunity, rewards racist vigilantes with internet fame and money, and punishes communities of color with death if they question that order.

I am calling for a moratorium on broadcasting these videos on television and online unless the victim’s family consents to such publicity. In the same way that an amendment to the Comstock Act of 1873 banned the circulation of lynching postcards in the US postal system, legislators can use the Broadcast Decency Enforcement Act of 2005 (BDEA) to fine TV news outlets and social media platforms that continue to profit from these traumatic images.

President George Bush passed BDEA to increase the indecency fines tenfold after the infamous Nipplegate incident at the 2004 Super Bowl halftime show. It is bewildering to think that Justin Timberlake popping a piece off Janet Jackson’s corset — to reveal her bare breast on TV — was considered obscene enough to inspire new legislation, while airing fatal police footage continues to be allowed.

Removing the financial incentive for news media to air these ghastly videos may force journalists to engage in more reparative storytelling. This kind of journalism would not play the Toledo video in slow motion in search of a gun. It would ask, instead, what kind of systemic failures led to a 13-year-old being outside at 2 in the morning in the first place? What kind of endemic biases led Virginia police to disregard Lt. Nazario’s military uniform, to regard instead his other uniform, his Blackness? What kind of systemic cruelty led Chauvin to believe that George Floyd’s pleas for his life did not matter? These are the hard questions that policy, not more police footage, can answer. This is where journalism must go next.

The road to dismantling deadly policing will be long. I believe news media can help jumpstart the process though, by doing away with the false idea that African American and Latinx communities need to play this game of video empathy before justice. It is time to simply start believing communities of color. We have enough proof. We have enough pain. What we don’t have is reform. And we owe that to so many people, especially to those who have called out for their mothers from the pavement, and to those who expired even before they had that chance.

Allissa V. Richardson, PhD, is the author of Bearing Witness While Black: African Americans, Smartphones, and the New Protest #Journalism. She is an assistant professor of journalism at the University of Southern California’s Annenberg School.

Hearing loss affects 1 in 4 adults in the US. Is our noisy world to blame?
Trump goes after Iran on Twitter: “YOU WILL SUFFER CONSEQUENCES”
A disgraced evangelical leader returns to ministry after #MeToo. He won’t be the last.
Nursing homes are especially vulnerable to Covid-19. Here’s what it’s like to work in one.
Hope Hicks will testify in front of the House Judiciary Committee next week
Why a question about Ukraine sent Mike Pompeo into a rage