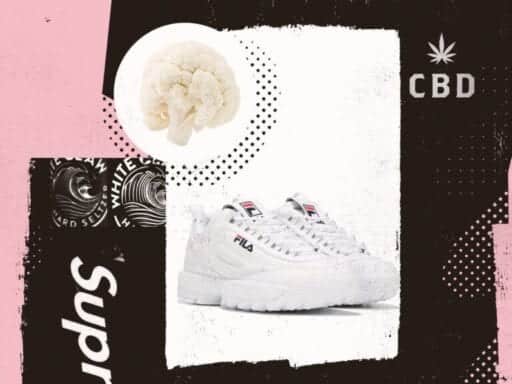 Cauliflower was nowhere, and then all of a sudden it was everywhere. This is because cauliflower is mostly inedible unless you pretend it is pizza, and it took civilization until around the mid-2010s to realize people could make lots and lots of money by doing exactly that.

Plenty of other items have been plucked out of relative obscurity and into the diets and wardrobes of millions of Americans over the past few years: oat milk, anything with CBD in it, intentionally hideous sneakers such as Fila Disruptors, alcoholic seltzer, the concept of “millennial pink,” for example.

All of these things are, in short, trendy, which you probably already knew, because trends are an inescapable part of being a human. Where those trends come from is a more difficult question — a question that a particular group of people is paid a great deal to try and figure out.

They’re the subjects of a new book by Temple University advertising professor Devon Powers, On Trend: The Business of Forecasting the Future. Through interviews with 72 trend forecasters — or futurists, as they’ve more recently taken to calling themselves — Powers shows the ways trend professionals “read” culture by talking to thought leaders and listening to social media and in turn shape it, and how they bring the culture of the fringes into the mainstream.

She offered insights into how trends work and evolve, and the ethics of the trend business: Where do futurists look to find out what’s next, and how do those people and places inform the future they’re ushering into being? How do we study trends without replicating the often unequal systems they stemmed from? If the rich and powerful adopt to a trend first, how do we avoid simply following their lead and repeating the past? Powers, for her part, has some ideas.

Was there one trend that made you interested in studying them as a whole?

In 2012 or so, I started being very interested in when things got really, really popular and triggered a backlash. Rebecca Black was really interesting to me. There was this almost allergic reaction people had, [as though it was] the worst thing ever, and yet people could not stop talking about it. The engagement was driven by dislike. It felt like a different cultural phenomenon where there was real value to be gotten from something being popular, whether it was liked or not liked.

At the same time, “trending” was a word that people were starting to use to describe popularity in general. I totally discovered by accident that there was a trend industry. The first book that I found was [original trend forecaster] Faith Popcorn’s Popcorn Report, which came out in 1991 and introduced me to the whole idea that there are people who study trends for a living, who sell trends to companies, and who work to anticipate and forecast the future.

Can you walk us through how professionals “read” culture?

Professionals read culture basically the way that many of us read culture, but kind of on steroids. One of the companies I researched says, “We eat culture for breakfast.” What that means is they’re reading all of the news, doing social media listening, market research, ethnography, focus groups.

Many companies don’t have the time to digest all of that information. What forecasters do is they digest it for you, and then they use that information to see patterns. Those patterns may be really overt; for instance, in fashion you see animal print popping up everywhere, that tells you something. Or they may be more subtle that occur across different sectors. But once you’ve found those patterns, you use those patterns to read them for what they might be signaling about where culture might be going.

What are the times in history when trends became really important, and what do all those time periods have in common?

The other important period is the late 1960s and early 1970s. Again, we see lots and lots of social and cultural upheaval, changing technologies, and an abundance of new information about markets and market segmentation.

We are in a very, very similar moment in our current period. A lot of technological changes are taking place, [we have] dramatic abilities to monitor information and data about what people’s desires and preferences are, and [we’re] using that information again to extrapolate what might be coming.

All these times share in common massive technological change, massive social change, and a fear and excitement about the future that makes people want to figure it out before anybody else.

For a period in the ’90s, this was often called “coolhunting.”

Coolhunting is a very interesting story. It started with marketers being really quizzical about Generation X, and so advertisers were going out and using handheld video cameras and talking to young people to try to figure out what they like, and then feeding that information back to companies to make decisions.

Right as these dynamics were happening, Malcolm Gladwell wrote an article called The Coolhunt in 1987, which really set the train in motion, and made other companies that weren’t doing these practices sit up and say, “We need to be doing this too.”

Companies still do exactly these same kind of processes. Part of what happened is by virtue of its success, it became a generic practice that people didn’t think was anything special anymore, so it didn’t need a special name. But then there was a bit of a backlash to this idea, that if you could farm cool, then you were somehow destroying cool — you’re chasing it into obsolescence. They didn’t want to be conquistadors.

Much of the book centers around how trend forecasting creates a cycle: There are people doing something cool, and then the trend forecasters come in, and by naming it and disseminating it, it accelerates the spread of the cool thing. How has that cycle sped up so much in the past couple of decades?

One of the things people ask me is, “Do trend professors make up trends?” My answer to that is always no. What they do is they observe things that are legitimately happening in culture, and they press the gas on them.

They help those things to be more present in our environment, so that people who are observant start to see things in stores and see them on social media and be attracted to them and want to do them. The metabolism of culture is a lot faster.

What are some of the effects of that very fast cultural metabolism?

People get whiplash. We’ve seen, at various moments, backlashes to that: slow food, slow music, and these ideas that keep percolating up about how to press pause on this constant push to change. I think all of that has a psychic cost and an economic cost, even if it’s just as simple as constantly feeling like you need to purchase new stuff. It obviously has an environmental cost, if you think about the quick cycles in fashion.

And despite the fact we have so many trends going on at once, it also can flatten cultural difference. Sometimes those trends emerge from marginalized people who don’t get the opportunity to actually profit from their own cultural developments.

You can go to pretty much any city in the world and find an Airbnb with the exact same light fixtures and mid-century modern furniture because everyone is pulling from the same trends.

It’s so boring. I live in Fishtown in Philadelphia, and how many craft beer bars do we need? I can throw a stick and hit seven of them. It’s like, somebody just bring me a Bud Light, please!

One of the things that’s happened over the last couple of decades was technological change with how much information we’re digesting all day long, with how many new products are being launched all the time. It just expedites these processes.

You write about how trend forecasters are good at organizing patterns so that they tell a story about the world. Is that why people love reading about trends, because it helps us make sense of things?

The world is a very chaotic place. We all want to find a way to carve some sense through the madness. I think that trend forecasting offers one really key way and really easy way to say, “here’s what’s happening.” That’s true not just for the corporate trend forecasting and futurists that I’ve talked to, but also any journalist or commentator. So many of us like to think that we have a handle on what is going on.

There’s a certain cachet that comes in being able to identify something and feeling like you’re right, and feeling like other people say, “Oh, yeah, that — that’s what I was trying to put my finger on.”

You mention how so much of trend forecasting is looking at what wealthy white people in coastal cities are doing. What are some of the ethical questions that you hope trend forecasters should keep in mind when they’re working off of these obviously flawed systems?

The future belongs to all of us, and yet the people who have the most control over the future are the people with the most money and the most resources. They often have the ability to take the status quo and push it forward, or the capacity to maintain the things they don’t want to change, or [refusing to] question things they don’t want to question. But they also have the possibility of making their versions of the future the ones that we all have to pay attention to.

If you’re Jeff Bezos, and you work on Blue Origin and you say we’re all going to go to Mars, I have to pay attention to that. Trend forecasters end up having to accommodate and appease these elite versions of the future, and not pay attention to both futures for other people.

Often we hear people talk about the future and imagine a world where racism is just magically solved by an algorithm. We all know when you look at machine learning and AI that they actually reproduce and accentuate a lot of the biases and racism that exists. They’re not better. In some ways they are worse, because they have this veneer of objectivity and perfectibility. So that’s the concern that I have. When you are imagining a particular future, who is that future for, and who are you leaving out of that vision?

Rebecca Jennings is a reporter at The Goods by Vox, where she covers internet culture. She frequently writes about how tech platforms like Instagram, YouTube, and TikTok shape our lives. She previously wrote about the selfie-editing app Facetune for The Highlight.

Cyclone Kenneth leads to five deaths and dangerous floods in Mozambique
Vox Sentences: The 2018 midterms still aren’t over
Trump’s Justice Department is threatening cities that allow safe injection sites
“This could be a massive disaster”: What happens if the coronavirus hits China’s internment camps?
Amy Klobuchar is the thinking moderate Democrat’s electability candidate
“Racism may target Black people, but it damns a democracy and it damns humanity”