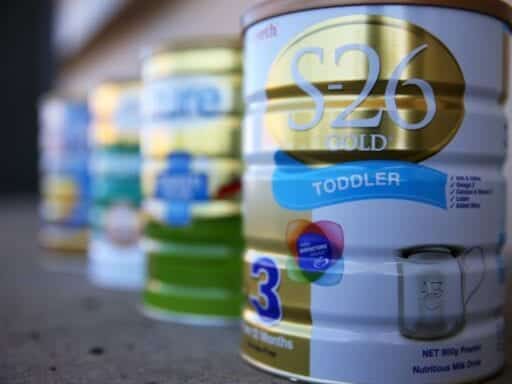 President Donald Trump, oddly, tweeted about breastfeeding and baby formula on Monday. “The U.S. strongly supports breastfeeding but we don’t believe women should be denied access to formula,” he wrote. “Many women need this option because of malnutrition and poverty.”

Women’s health clearly does not concern Trump. These tweets are probably in reference to a damning story published in the New York Times on Sunday about how administration officials meddled in a United Nations global health meeting in May that was set to approve a simple, uncontroversial resolution supporting breastfeeding. And Trump was annoyed.

According to the Times, the administration was kowtowing to the interests of baby formula makers, and going against decades of public health research demonstrating that babies who are breastfed have better health and development outcomes than babies fed formula.

But it turns out that global health resolution was just one of a few battlefronts in the Trump administration’s fight against policies that support breastfeeding, as the administration increasingly aligns itself with the US infant formula industry.

A key policy the industry hopes to influence next is a forthcoming United Nations guideline for “follow-up” formulas or “growing‐up milks,” baby formula marketed for children over 6 months of age. Infant formulas, aimed at babies younger than 6 months, are now heavily regulated in many countries. The new rules were put in place only after it came to light that millions of babies died, especially in Sub-saharan Africa and South America. This followed aggressive marketing campaigns by formula makers like Nestle that led mothers to give their babies formula powder mixed with contaminated water instead of breast milk.

But formula companies want to head off regulation through global food guidelines of these follow-up formulas, which are virtually indistinguishable from their infant counterparts when it comes to their packaging and labeling. These products represent the fastest-growing category in the $700-billion baby formula market.

“Because follow-up formula is promoted with labels that look similar to infant formula —which is specifically formulated to meet the needs of young babies — the marketing of these products contributes to parents misusing these products, leading to potential health risks in children,” said Lucy Sullivan, the executive director of 1,000 Days, a women and child nutrition nonprofit. “We know there’s a lot of consumer confusion about how to use these [older infant formulas], and that confusion is purposeful on the part of companies … to get around restrictions countries have implemented.”

The UN group responsible for setting the standards on how countries should regulate food products, the Codex Alimentarius, hasn’t yet decided whether follow-up formulas should be treated like infant formulas — as “breastmilk substitutes.” Calling them a substitute for mother’s milk would mean heavier scrutiny and regulation — something public health advocates want.

But if the US gets its way at an upcoming November Codex meeting, where a final decision on the standard for these products is expected, they would be deemed food instead.

“The US wants to call it a food, not a breast milk substitute,” said Elizabeth Zehner, project director for Helen Keller International’s child feeding project, who has been present at the Codex negotiations. “That will leave the door open for all countries to call these products as non-breast milk substitutes, so they will get advertised on TV — and they look just like the infant formula.”

In other words, these older infant formulas could be the loophole through which the baby formula makers repeat their dark history of misleading moms about the benefits of baby formula and undermining breastfeeding, leading them to abandon the practice early or altogether. And they may do so with America’s help. “In my view,” Sullivan added, “this is a public health disaster waiting to happen.”

Why health officials are adamant about promoting breastfeeding over formula

To understand why all this matters, let’s step back a bit and talk about breastfeeding — and why it’s so important for public health.

The World Health Organization recommends that babies exclusively be breastfed (i.e., only consume their mother’s milk) for the first six months of life. After that, it suggests about another year and a half of partial breastfeeding along with baby food. So in total, according to the WHO, babies should be breastfed for about two years. The American Academy of Pediatrics recommends breastfeeding for a minimum of 12 months.

Health organizations have long promoted more breastfeeding since science has revealed a range of health and social benefits.

One of the undisputed health gains: Breastfeeding helps protect against a range of illnesses, including ear, throat, and sinus infections. It also protects against pneumonia and diarrhea, which are common killers of infants globally. Human milk contains many hormones, bacteria, sugars, and antibodies that aren’t found in formula, and these have been shown to fight gastrointestinal and respiratory infections in babies.

Research has also linked breastfeeding to higher rates of survival during the first year of life, higher intelligence, and lower rates of chronic diseases like obesity and diabetes later on. Finally, breastfeeding seems to boost maternal health, reducing the risk of postpartum hemorrhage right after birth; and in the longer term, Type 2 diabetes and breast, uterine and ovarian cancers among mothers. If breastfeeding were near-universal, some 820,000 lives could be saved every year, a Lancet report estimated.

For all these reasons, public health institutions, including WHO and governments around the world, have been working to encourage and support moms in breastfeeding, and also counter marketing claims by food companies suggesting formulas are an equivalent substitute.

But the US has often been a roadblock to improving global breastfeeding standards. In 1981, the WHO launched the International Code of Marketing of Breast Milk Substitutes — which is separate from the Codex but sets national standards all over the world for regulating the marketing of breastmilk substitutes and feeding bottles. It prevents formula companies from directly targeting mothers and doctors with breast milk substitutes, and also discourages promotion of the products and certain health claims on packaging.

One hundred and eighteen countries voted in support of the code when it was introduced at the World Health Assembly — a World Health Organization forum where 194 member countries convene to set global health policy. “The US was the only country that voted against the code,” said Sullivan.

Since then, the US has failed to adopt international breastfeeding standards. Then in May, as the Times reported, US delegates at the World Health Assembly used aggressive tactics to try to get countries to vote against a resolution that would encourage breastfeeding, threatening them with retaliatory trade or aid sanctions. In a strange geopolitical twist, only when Russia introduced the measure did the US back off.

To understand why this matters, let’s talk about an obscure set of standards called the Codex Alimentarius

But the UN resolution is only one breastfeeding battlefront the Trump administration is currently fighting. There’s another that’s arguably even more significant.

Last December, a global nutrition committee, brought together by the World Health Organization and the Food and Agriculture Organization (FAO) of the United Nations, convened in Berlin to discuss, among other things, how follow-up formula should be treated by the Codex Alimentarius.

The Codex, a joint project of the WHO and the FAO, develops the standards and codes of practice around food products globally to protect the health of consumers. While the guidelines aren’t mandatory, they are weightier than any WHO resolution since they inform laws around the world.

Many governments, especially in low- and middle-income countries, adopt Codex decisions in their regulations of everything from which baby formulas can be imported to how companies can manufacture and label them.

Public health advocates and global health officials at the December meeting said the US delegation — which included representatives from Health Human Services, the Food and Drug Administration, the Department of Agriculture, the US Trade Representative’s Office — argued that follow-up products are not breastmilk substitutes. (We’ve asked the administration for comment and haven’t yet heard back.)

One official who was at the last Codex deliberation, but did not want to be named for fear of losing their job, told Vox the Trump representatives fought every step of the way to ensure follow-up formula isn’t treated as a breast milk substitute.

The Trump administration is carrying forward America’s damaging history of putting industry ahead of public health when it comes to moms’ and babies’ health, Sullivan said.

“We are seeing trade interests rather than public health interests dominating now,” Zehner added. “We see heavy-handed pressure put on other countries to go along with US position, for example, letters sent to departments of trade in a number of countries,” she added.

Health advocates expect the US to employ the same tactics at the November 2018 meeting, where the final decision about whether follow-up products should be regulated like breast milk substitutes will be made. At that point, if the Codex committee sides with the US, the industry could avoid the tougher regulation and standards infant formula has been subject to — standards that have averted thousands of deaths around the world.

65 years after Brown v. Board of Education, school segregation is getting worse
Race is still the central dividing line in the Democratic Party
Why protesters have been banging pots and pans outside their windows
How the Sears catalog transformed shopping under Jim Crow, explained by a historian
Hate crime or hoax? The claims that Jussie Smollett orchestrated his attack, explained.
School shooting in suburban Denver, Colorado: what we know