The Thai boys cave rescue: what we know 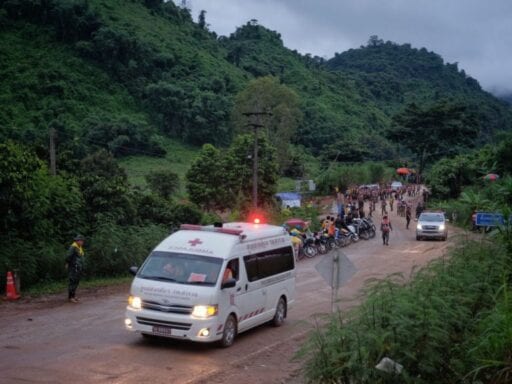 All 12 boys and their coach had been rescued as of Tuesday morning.

The mission to rescue 12 Thai boys and their soccer coach who had been trapped in a cave in northern Thailand for over two weeks is just about complete. As of Tuesday morning, all 12 boys and their coach had been brought out of the cave by the team of expert divers deployed to help guide the boys along the 2.5-mile journey to safety.

Only the doctor who has been caring for them since they were first discovered last Monday and three Thai Navy Seals involved in the rescue operation remain inside the cave. The boys are in good overall health, according to the Ministry of Public Health.

On Saturday, June 23, a group of 12 boys between the ages of 11 and 16 went with their soccer coach to explore a cave in the Tham Luang Nang Non cave system. As they entered, rain picked up, and the rising water trapped them inside. The group of 13 was missing for nine days before they were discovered by two British divers.

People in Thailand and around the world rejoiced when the group was found, but there was another problem: getting them out. Some sections of the cave were fully submerged in water and the journey seemed treacherous for the boys, aged 11 to 16. Rescuers began to frantically pump water out of the cave, while oxygen levels in the cave began to drop on Friday.

As the threat of more rains that could further flood the cave loomed, a rescue mission to get the team, whose nickname is the Wild Boars, out of the cave began in earnest on Sunday morning. At least 13 specialist divers and five Thai Navy SEALS were sent in escort the boys and their coach out.

Vox’s Radhika Viswanathan has a full explainer on the situation here.

On Sunday, four boys were saved, and after a pause on Sunday evening, a second phase of the mission commenced to attempt to rescue the others. Four more were rescued Monday, and the mission resumed Tuesday morning, when the final four boys and their coach were brought out of the cave. Here’s what else we know: