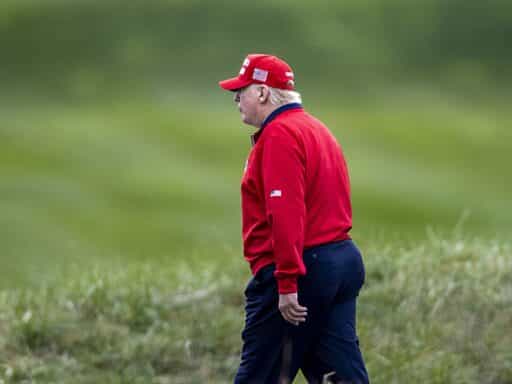 It’s bad for the country, but it’s raking in the money for Trump.

President Donald Trump’s ongoing effort to overturn the election results is almost certain to fail, because Joe Biden clearly and decisively won the election. But the president has self-interested reasons for dragging out the fight as long as he can.

The nearly 500 emails blasted out by the Trump campaign in November raised at least $170 million after Election Day, as Will Steakin and Soo Rin Kim reported for ABC on Tuesday. (For context, the Trump campaign account’s best monthly fundraising haul before the election came in September, when they raised a mere $81 million.) They’ve done so with highly misleading insinuations that the money is funding Trump’s farcical legal challenges of the election results, when a careful reading of the emails’ fine print shows the money is largely being raised for things like paying down campaign debt and funding Trump’s post-presidency operation.

And it won’t be especially hard for Trump to eventually route some of his new leadership PAC’s windfall into his own pockets. (A “leadership PAC” is a type of political committee formed by current or former elected officials.)

THREAD: recap & analysis of my fundraging emails from November.

“While he can’t just cut himself a massive check, he could rent out Mar-a-Lago for an obscene amount of money — leadership PAC money — to give a speech himself, and that would be totally legal,” Jordan Libowitz, communications director for Citizens for Ethics and Responsibility in Washington (CREW), told Vox in an interview. “So if you view the Trump administration as one long grift to redirect money from taxpayers and political supporters into Trump properties, this would be a good move to do that.”

But the fact that Trump could reroute contributions solicited by his campaign to his own pockets would likely come as news to some of the Trump followers who have ponied up during a time when losing campaigns are usually winding down operations. That’s because the emails the campaign continues to bombard people with nearly a month after Trump’s loss to Biden are misleading at best.

On November 15, for instance, the Trump campaign sent out an email that framed its post-election fundraising pitch around the president’s failing legal fight to overturn the results.

“President Trump is FIGHTING BACK to defend the integrity of this Election, but he can’t do it alone,” the email said. “He needs YOU to step up and join him by contributing to our critical Election Defense Fund. This is so important that he’s giving YOU the opportunity to increase your impact by 1000%.”

There’s just one problem: There is no such thing as Trump’s “Election Defense Fund.” Instead, as Josh Dawsey and Michelle Ye Hee Lee detailed for the Washington Post, the majority of the money raised by email pitches of that sort goes to the leadership PAC Libowitz mentioned:

According to the fine print in the latest fundraising appeals, 75 percent of each contribution to the joint fundraising committee would first go toward the Save America leadership PAC and the rest would be shared with the party committee, to help with the party’s operating expenses. This effectively means that the vast majority of low-dollar donations under the current agreement would go toward financing the president’s new leadership PAC, instead of efforts to support the party or to finance voting lawsuits.

According to @TrumpEmail, a Twitter account that has closely monitored Trump’s fundraising emails for three years, the tone of the missives has subtly shifted in recent days from hyping the fake “Election Defense Fund” to saying things like, “One thing has become clear these last few days, I am the American People’s ALL-TIME favorite President.” The email that contained that claim also cited already-debunked claims from disreputable outlets like the Epoch Times to insinuate that the 2020 election is still up for grabs.

But the one constant is the emails aim at getting supporters to open their wallets — which they have. Campaign officials told the Post the bulk of the fundraising has come from small-dollar donors; the emails have activated “the president’s base of loyal and fervent financial supporters, who tend to contribute the most when they feel the president is under siege or facing unfair political attacks.”

Unlike PACs that are tied to chambers of Congress, there are very few restrictions on what Trump can do with the leadership PAC money. In addition to the possibility of Trump using the funds to hold events at his properties (and thereby reroute it to his own pockets), Libowitz explained that he could use them to continue to hold political rallies around the country.

“Renting out a basketball arena does not come cheaply, and given his history of not paying places back and the fact that he’s not a candidate, or at least not a current nominee, it’s much more likely people will require cash up front” after he leaves office, Libowitz said. “So he could rent out Trump Force One to the leadership PAC and charge his leadership PAC for his own use or his own plane to go to a rally. It basically just opens up a bunch of new ways he can continue to bring in money from his supporters that he can then redirect to his businesses and then, of course, to himself and his family.”

So while it would be in the best interests of the country for Trump to acknowledge that he lost and psychologically prepare his followers for the reality that Biden will be inaugurated as president next month, dragging it out for as long possible allows him to keep grifting.

“I think there is a question of whether this is just one last gasp of trying to milk every dollar he can out of his supporters, or whether people have so convinced themselves that he’s going to find some secret way to become president that they’ll continue to give him money,” Libowitz said.