Hustlers is a recession-era period piece. Here’s how the costume designer created it. 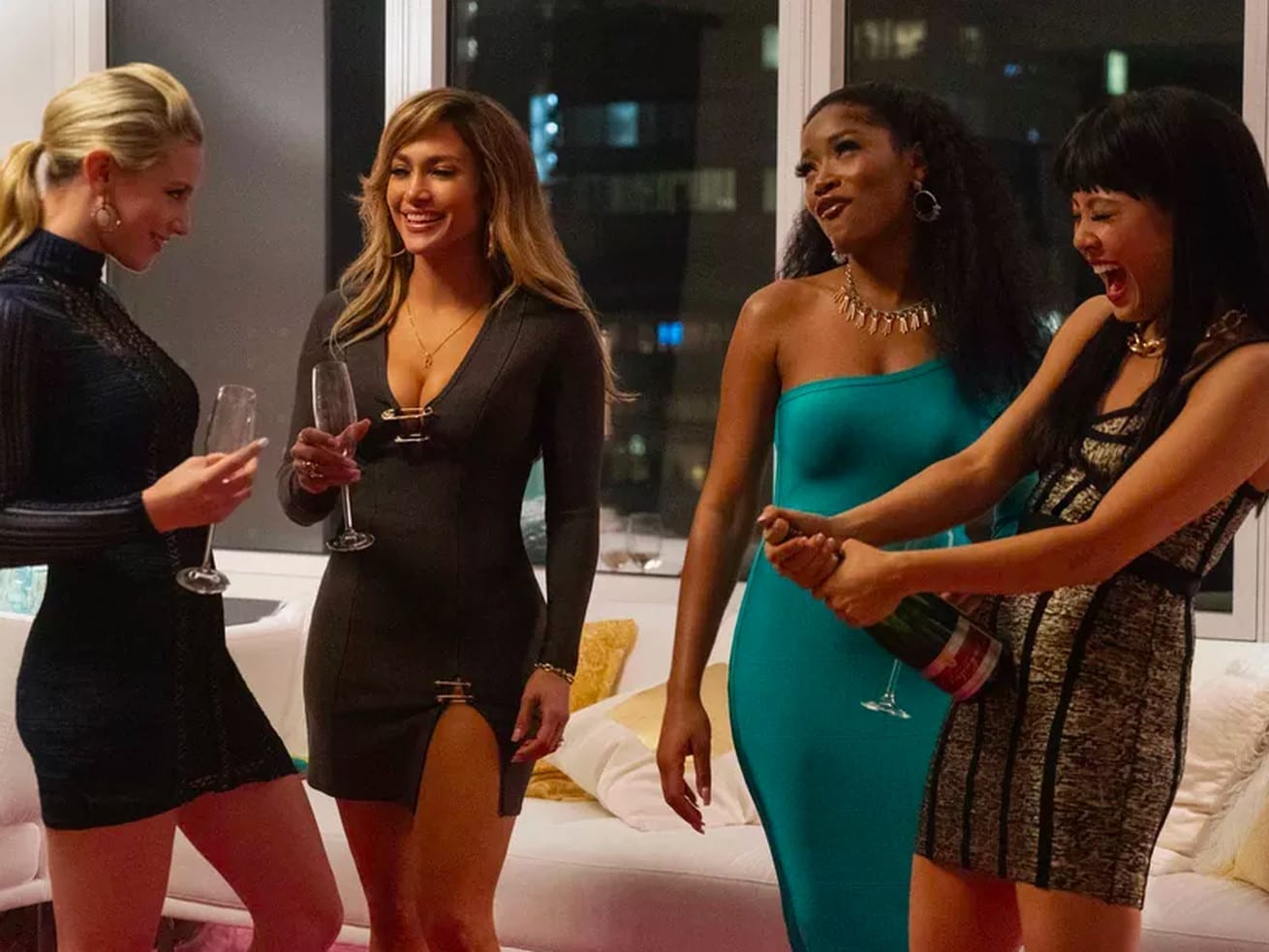 In the mid-2000s, strip clubs could be a lucrative business for a dancer in New York City, if you could get hired at the right ones. But after the financial crash of 2008, the well dried up, for the Wall Street workers culpable and for the clubs where they’d previously drop thousands — sometimes tens of thousands — of dollars in a single night.

With the money more scarce, a handful of dancers solved this particular problem by secretly drugging men’s drinks and charging their credit cards for the kind of bills they’d once racked up. Nearly a decade later, their story is now a feature film and a box office hit, boasting a killer cast that includes Jennifer Lopez, Constance Wu, Keke Palmer, Lili Reinhart, Cardi B, Lizzo, and Julia Stiles.

Hustlers, based on a 2015 New York Magazine feature by Jessica Pressler, is at once a neon-flecked stripper heist and a tender portrait of female friendship. It is also a startlingly realistic-looking snapshot of a time that hasn’t yet been fully immortalized in aesthetic history. Though it takes place barely more than a decade ago, the signifiers of wealth and status of the pre-recession period are a stark contrast to the ones that followed immediately after, providing an unexpected texture to the experience of watching the film.

Which makes Hustlers, essentially, a period piece. Responsible for outfitting its cast was costume designer Mitchell Travers, who worked with director Lorene Scafaria to create a perfect encapsulation of pre- and post-recession New York City.

I spoke to Travers on the process of researching and recreating the recent past, the difficulties of fitting exotic dancewear, and how the film flips the script on the role of men and women onscreen, with women occupying a traditionally ornamental presence (in Hustlers, it’s the constant flow of interchangeable finance bros who provide that labor). We also talked about how money and wealth is displayed in boom times and bust times, and how the pre-recession period anticipated our current culture of fame worship.

How did you approach the research for this pre-recession period?

The amazing thing about this period in history is that it’s heavily photographed. It was a time where paparazzi were following women at pretty much around the clock, and so I was able to study people from their mornings, to when they went to the gym, all the way to when they were going out to the clubs. It was a sad state of affairs that people were followed so relentlessly, but in terms of my work, it gave me amazing insight into these human beings.

I was challenged in that there’s not an identity or a look for this certain era [yet]. There really aren’t many movies set in that timeframe; I had to look towards celebrity obsession to understand what the rules were for the mid-2000s. It was the the early days of Lindsay, Paris, Nicole, Britney Spears, all of those girls who were the paparazzi targets. I felt like our girls would be looking up to them.

How did fashion change before and after the 2008 crash, and how did you show that on film?

I was comparing it to The Great Gatsby before the crash. There’s a massive amount of excess. In the early 2000’s, everything was covered in rhinestones or graphics and screen printing, so there was this quality to it that was a “more is more” feeling.

Of course, after the crash things changed. People didn’t want to demonstrate wealth as much and it was considered a bit in poor taste to be flaunting in the same way. It was interesting for us to be able to show both sides of the world and be able to experience that through our characters.

Brand names play such a big role in the film. How you decided like what labels they would want when the characters started making real, life-changing money?

There were articles written about what bag the girls were buying; they would state in interviews which shoes they were wearing. It was an invasive time, but it did get me an incredible source and then I could track down the exact bag they were carrying in every year — Baby Phat, Von Dutch, Rock & Republic, Ed Hardy, Bebe, all of those.

As a side hustle, Ramona (Jennifer Lopez) tries to launch that denim swimwear line, which was so funny, and felt so perfectly suited for the mid-2000s.

One of the things that [Lorene] picked up on so brilliantly was that everybody was doing a line at the time. Paris Hilton had a line of cell phones, and there were even celebrities who had lines of fake tanner. It was the beginning of the endorsement era. She wanted that feeling in the film, and gave me an incredible foundation to design on top of.

Obviously the standout piece in the film is Ramona’s enormous fur coat right in the beginning. Where did it come from, and what did it represent to the film?

For me, it represents the invitation to come in and take shelter in a friendship. It’s a visual symbol of success and wealth and power, but that’s the world that she’s reflecting or presenting to the men in the club. What it represents to the Destiny (Constance Wu) character is something else, which is an invitation to be sheltered and taken care of in a way that her character hasn’t been able to experience at all. For us, it was this little nest that she could borrow into and feel like somebody had her back for the first time.

We looked at a million different options. [The decision to use fur] was something that was scripted to reflect the times that we were talking about. We wanted to remind people that this was a period piece, and times have changed significantly since then. I’m not totally sure where we got it, but we looked at a number of different coats until we found that one and we just knew as soon as we had it. That was the Ramona coat.

As you mentioned, so many of these looks are so designed for movement and nothing ever falls out. Physically, how did make sure of that?

You get to know your actresses really intimately. You’re establish a line of trust with them, so that they feel that you’re going to look out for them, you’re going to take care of them, you’re going to flatter them and you’re also going to help them with their character. It’s a lot like working with athletes, you have to understand what they need from their costume and what limitations they have in terms of their movements.

Everything stretches; there was a ton of hidden snaps and double stick tape. We joked on the movie because I don’t think we had a specific budget line for double stick tape, but it was a significant expense.

In a film about strippers, it’s notable that none of the leads were ever fully nude. I’m interested in how you used nudity in the film.

It’s one of those things where there is a certain expectation on the film, and one of the joys about this project was that so many people go into it with a preconceived notion and the film challenges you to ask why you felt like that was the movie you were expecting or why you didn’t see more. And I think that our film challenges people to flesh out these women that have been marginalized and prejudged for so long. Ultimately I just want to make the point that the movie is about human beings and the relationships that are formed in the process.

Selfishly, I’m interested in how you dressed Jessica Pressler’s character, the writer played by Julia Stiles. How did you approach dressing a journalist?

It was fun because obviously working with Julia was a lifelong goal. She gets to represent that judgment that I was just talking about, and these preconceived notions that people have about the women. We wanted a stuffy quality to her, and I turned to the preppy trends of the time, so that she’s got that boucle jacket on, a bit more closed off, very little skin exposed and much more about the clothing wearing her than her wearing the clothing — which is something I tried to achieve with our other girls.

Meanwhile, when Destiny meets with the journalist, she’s dressed far more similarly to her than to her old life.

Lorene wanted to reference some of the powerful women we’ve seen on other films, like Basic Instinct. So we did that Sharon Stone moment. I love getting a chance to see her that way. I looked at how the girls that I’ve mentioned before — Paris, Britney, Lindsay, all of those girls who got in trouble — when it came time to present themselves, they presented this false, completely white version of themselves. If you look like Lindsay Lohan, she wears white head to toe for her court appearances.

It was a way to remind the audience that it was a period piece. I just love the chance to present this very gentle, perfect, pure version of Destiny when we’ve known her be a much more complicated version of that person.

Men are not really a major part of the movie at all, to the film’s credit. I’m wondering if there was any difference in the way you dressed those ornamental Wall Street bros who visit the strip clubs before versus after the crash.

We had three categories of men, A, B, and C. We had the top tier, Wolf of Wall Street sort of men and the next level, which was like the sport jacket and jeans — which I think is such a horrendous look that was so prevalent at that time. And then the group below that was more of the Jersey Shore types with their Ed Hardy shirts and crazy denim and things like that.

Oftentimes, women have been treated as disposable in film, used as filler and background to make things look pretty. And I love that our film gave me the chance to do [the opposite]. I could quarantine the men into three groups and have that speak for their whole gender.

Why the US and Iran are fighting over this tiny waterway
Portrait of a Lady on Fire director Céline Sciamma on her ravishing romantic masterpiece
Paid sick leave could be a deciding issue in November’s key House races
Morbius, Marvel’s living vampire, finally has a trailer. And a huge Spider-Man connection.
Wildfires are making California’s deadly air pollution even worse
Armenia and Azerbaijan’s war is entering a “more dangerous and potentially tragic” stage

The Great Gatsby has one of the most iconic covers ever printed. How do you redesign it?