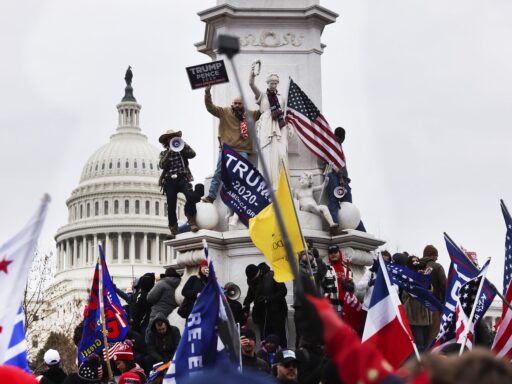 Some are grappling with the prevalence of extremism in America, after seeing co-workers and fellow churchgoers in the Capitol riot.

Donald Trump voters haven’t made themselves scarce over the last four years. The president won around 74 million votes in the 2020 election, and spent the majority of his term hosting rallies around the country where MAGA hats, banners, and flags were on full display.

But it was on January 6, as thousands of Trump supporters protested outside the walls of the Capitol building — with some breaching into the Senate — that the stark reality of the country’s political divide truly came into focus. Most of these agitators — many of whom broadcasted the riot live from their phones or uploaded selfies on Facebook — made no effort to mask their identity. For those watching the insurrection in horror from their homes, this had a chilling effect: As they scrolled through their social feeds and watched the chaos on the news, many caught glimpses of familiar faces.

It’s tempting to dismiss the insurrectionists as uneducated or representative of the ultra-fringe parts of society. But reports have surfaced of typical middle class or sometimes elite Americans at the riots — police officers, elected officials, real estate agents, and CEOS. There’s plenty of historical precedence for this, including radical white supremacist groups like the Ku Klux Klan, which included many “respectable” professions such as lawyers, merchants, and ministers.

“I think this is a wake-up call,” says Donald Haider-Markel, a professor at the University of Kansas who studies hardline political movements. “For people to say, ‘These are everyday people, people I know, who are clearly getting involved in political extremism.’” Today’s pro-Trump movement is particularly large — Haider-Markel told me that the only precedent for this level of radicalization in American society was the anti-communist mania of the 1950s.

This sobering realization only reiterates that the insurrection was the doing of everyday Americans; the brothers, sisters, co-workers, and neighbors that make up the individual pieces of our lives. “It was crazy to see someone that I’ve been around at the riot,” said Stephanie, who recognized a roommate of her best friend at the riots. “This shouldn’t be a mainstream part of our politics. But it’s good for us to understand how widespread this radicalization has become.”

Vox spoke to some people who are currently sifting through that fallout. What’s it like to recognize someone you know in that sea of red hats? How does that recontextualize your interactions with them? Does it crystalize just how normalized this version of far-right fanaticism has become in our society? These individuals wanted to remain anonymous for their own safety and to not out the radicalized acquaintances in their lives; Vox has given them pseudonyms. Read their stories below.

“I was disheartened that it had gotten this far”

We were both models in New York City, and we got along wonderfully. We would go to the gym together and go out together at night. It was never intimate or romantic, he’s not my type, this was a platonic friendship. We never talked politics, either. But we did speak about how important integrity is, and how important it is to be true to yourself when you’re in this industry and your physical attributes are skewered at every moment.

But this year, during the pandemic, he started promoting anti-masking on his social media. He was saying, “If you’re healthy you don’t have to wear a mask.” He was going against all of the data we have. I’m seeing this and I’m thinking, “I’m your friend and I comment on this and push back in a non-confrontational way.” I voiced that to him — that those things weren’t true — and said, “You have my phone number. Give me a call. Let’s have a conversation.” I’ve had many friends who have insisted that Covid-19 is about personal freedom, and remain blind to the facts in front of them.

All of a sudden, at 3 am on Friday after the riots, I got a message from a fellow model from a website that published his photo. He had apparently gone to the Capitol and taken a selfie there. There were captions like, “Terrorism but make it fashion.” That’s when it hit home. I was in school, and I had deactivated my social media during the semester. I stared at that picture and I said, “Oh my god.”

I was sick. I wanted to vomit. I went to go see what he had been posting lately and there were videos of him leading the anti-masking sentiment in Los Angeles. He had gone into it hard. I made a real effort to interject before he morphed into this other person who I didn’t recognize, so I was disheartened that it had gotten this far.

But was I really surprised? I already saw the start of it. If you’re in a neutral state of mind, you can recognize the descent into the conspiracy theories, and the inability to acknowledge the facts of the situation. It’s these extremists who voted this man into office. But they aren’t so fringe, are they?

“There’s a stereotype, but I think their boldness has helped us see the full landscape”

It’s someone I went to church with growing up. He was very active in the church and was very friendly, charismatic, and popular in the congregation. Always the funny guy. As a kid, I was very fond of him. But later I discovered that he was extremely radical. He posts constant Trump stuff on Facebook.

Sure enough, when I was watching the riots last week, I thought, “He was probably there.” I was right. He was posting a lot of videos from the Capitol. I’m from Indiana, and I’m openly gay, and today I wouldn’t feel safe in the room with him. That’s what’s hard to see. I’m also still religious and it’s tough to see people in the leadership of my old church engage with his posts saying, “Thanks for saving the country, and defending the president.”

It’s gotten so cult-like. I’m from small-town Indiana, I have conservative family members, and people I’ve grown up with who voted for Trump. It makes me feel vulnerable that they’re willing to go along with someone with such corrupt morals. That’s the thing I think Democrats need to understand after the insurrection. So many different people voted for this guy. Rich people, poor people, Black people, white people, Hispanic people. There’s a stereotype, but I think their boldness has helped us see the full landscape.

“If I didn’t know anyone at the riots, I don’t think I would’ve paid it much mind”

She was someone who lived with my best friend. We weren’t close. It was just a, “Hi, how are you” kind of relationship. We’re Facebook friends and she posted a lot online, but in the last two years or so I started to see her get more and more radicalized. Sure enough, as I was watching the riots last Wednesday and scrolling through the internet, I saw her broadcasting live from the Capitol. Then, she posted a picture where it was pretty clear that she was on the balcony with a bunch of people around her. I was like, “Oh my god, she’s going to get shot or something.”

I live in Nebraska. This is a red state. I’ve been around Trump supporters since he’s been in politics. I’ve seen the Trump flags, T-shirts, and MAGA hats. I know those people are out there because I see it all the time. But it was crazy to see someone that I’ve been around at the riot. It proves that Trump supporters aren’t just these old men stuck in the 1950s. I’m in my 20s and there are people my age involved. That just blows my mind. It makes me look at the people I grew up with, the people who have such similar life experiences as me. How did we end up so far on the opposite sides?

If I didn’t know anyone at the riots, I don’t think I would’ve paid it much mind. It would just be another one of those things that’s happening 750 miles away from me, where I’d think about it for a week and move on. But knowing that she was there has really added a face to the Trump movement for me.

There were so many people from all different parts of the country, all united in the same goal. Yeah, you meet a few people in your life who fit that description, and then you see them all together and you realize how common it’s become. We shouldn’t accept that — this shouldn’t be a mainstream part of our politics. But it’s good for us to understand how widespread this radicalization has become. Once we acknowledge that, that’s when we can start to change it.