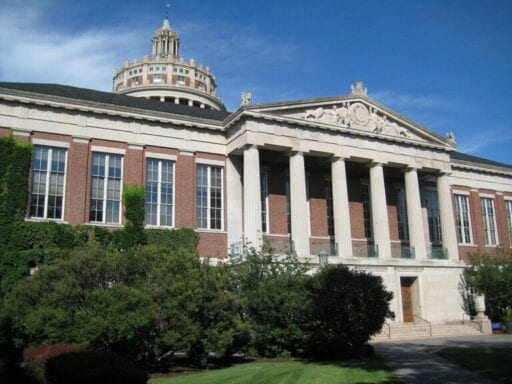 To be greater, America has to be different.

I went last weekend to Rochester, New York, for a panel at the University of Rochester; it’s an interesting place to visit since it’s essentially two kinds of classic American places at once. On the one hand, it’s very much a “post-industrial small Northern city” that’s hurting from the collapse of Kodak, the decline of Xerox, and the departure of Bausch & Lomb. On the other hand, these days it’s very much a “college town” kind of place with an economy (and, to an extent, a physical footprint) that’s kind of dominated by the university and the associated medical complex.

But that combination of attributes actually suggests some really easy ways to make the city thrive.

Precisely because Rochester is post-industrial, unlike a lot of pure college towns it has plenty of housing stock (the current population is 208,000 down from 333,000 in 1950). It also has a lot of infrastructure in the form of a big airport, uncrowded roads, plenty of parks, and a bunch of somewhat underutilized cultural amenities like museums.

So if it were easier for foreigners of above-average intelligence to get student visas to come to the US for college and grad school, and easier for foreign-born graduates of US colleges and universities to get permission to stay and work here, the university that provides the city’s economic engine could grow. And while of course lots of foreign-born graduates would either go home or move elsewhere in the country, some would stay and provide a labor pool for the city’s private sector, and one or two might form the big successful companies of tomorrow.

You’ll never have the demand to live there that you see in a warmer place like Austin, but because of Rochester’s past as a larger city, it can add people with many fewer growing pains.

As Noah Smith has written, this is the general prescription for Rust Belt revival — invest in institutions of higher education and take advantage of US higher education’s status as a viable export industry to bring more talent into cities that already have physical infrastructure.

And as he’s also written, President Trump’s actual policies of clamping down on student visas and skilled guest workers move us in the wrong direction.

But this is ultimately not just a policy mistake — it’s a core contradiction at the heart of MAGA.

I’m always struck by the contrasts and similarities between MAGA and my friend David Alpert’s website turned advocacy operation Greater Greater Washington. The core theme of GGW is that the region should grow and change — improving and expanding mass transit services, building affordable housing and inclusive neighborhoods, investing in schools, etc.

MAGA contains a little of that spirit. America will be greater in the future, which means different from how it is now. But the emotional center isn’t great, it’s again — i.e., America will be more like how it was in the past. The problem, of course, is that if you look at how America was 40 or 50 years ago, you’ll see that it was a country with fewer people that had a somewhat lower median household income and a much lower per capita GDP. (Rising inequality means that median household income has grown more slowly than per capita GDP.)

People who were alive back then are, of course, free to feel nostalgic for that time. But a smaller, poorer America is going to be a weaker America that gets overtaken by China geopolitically and economically on a pretty rapid basis. There was a striking Foreign Policy article last week about how African and Asian students are increasingly looking to Chinese universities rather than American ones as Trump hangs “no foreigners welcome” signs wherever he can.

That’s an awful result. China has made incredible strides in some areas, but it’s a repressive dictatorship. It’s got a million Uighurs in concentration camps, it censors its internet, and President Xi Jinping is increasing the level of autocracy and centralization of power. People would much rather come to America than to China, and for good reason. We can’t necessarily let everyone come willy-nilly, but we should be thinking intelligently about how to get more talented and hardworking people into American communities that have space for them, not driving them away.

Trump has been impeached a second time
The Heathers TV show was pulled following a mass shooting — for the third time this year
“That awful day could have been so much worse”: New videos show how narrowly rioters missed lawmaker...
A bipartisan group of senators wants to pass emergency Covid-19 relief
Trump goes to the United Nations to argue against everything it stands for — again
The push for Joe Biden to choose a black woman as his running mate, explained