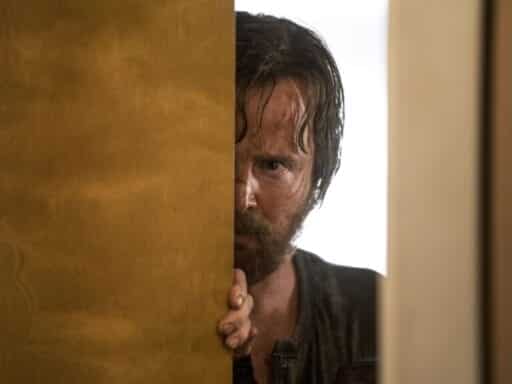 To me, Breaking Bad always seemed almost satirical, a tongue-in-cheek exposé of the moral bankruptcy of some existentialists’ philosophy — a counterpoint to the idea that the goal of one’s life is to recognize and exercise one’s total freedom to choose. Breaking Bad confronted the notion that you somehow nobly “become” yourself through making “authentic” choices, according to your own self-determined values and your radical freedom.

Because those choices might leave you in a less-than-noble place: busted, hated, dead, mourned by nobody, and with a blazing path of destruction in your wake. Much like Walter White, who by the end of Breaking Bad had betrayed his family, lost his livelihood, and was, well, dead; sure, he smiled, but he hadn’t really won in anyone’s eyes but his own.

Then again, Walt was mourned by his fans, or at least the ones who saw him as a hero rather than an anti-hero. (And whether Walter was actually acting in Sartrean bad faith is, I think, up for debate.) So in a way, the show made its point: Even if your desire to feel powerful and control others wrecks your life, someone’s going to think of you as their ideal.

El Camino helps illustrate the opposite, a little.

Subtitled A Breaking Bad Movie and written and directed by series creator Vince Gilligan, El Camino is a two-hour follow-up to the series finale, “Felina,” which aired just over six years ago. The tale no longer belongs to Walter White (Bryan Cranston), who died at the end of the series. Instead, El Camino answers some questions about what happened to Jesse Pinkman (Aaron Paul) after he escaped from his captivity in a meth lab and who we last saw driving away at top speed, screaming.

It’s not at all clear that anyone was really asking those questions. Shortly after the finale, Gilligan told GQ that he thought Jesse had probably “got to Alaska, changed his name, and had a new life,” though he admitted that “the most likely thing … is that they’re going to find this kid’s fingerprints all over this lab and they’re going to find him within a day or a week or a month. And he’s still going to be on the hook for the murder of two federal agents.”

But since then, there hasn’t exactly been a groundswell of speculation over how things played out for Jesse Pinkman (outside of my own staunch belief that he morphed into an animated character, changed his name to Todd, and went to live with a washed-up horse-man actor in Los Angeles). Breaking Bad’s series finale certainly hasn’t inspired the kind of enduring discussion that followed the end of The Sopranos, for example.

That doesn’t render El Camino useless. It just means the fun comes from seeing your favorite characters again, not finally resolving missing pieces that have tortured your sleep for six years.

And on that front, El Camino delivers. (I won’t give away the plot in detail, but if you prefer to know nothing going in, here’s the point where you should stop and watch before you continue reading.)

The movie’s title comes from the car Jesse is driving when he escapes his imprisonment, which is more or less where El Camino begins: With Jesse screaming and driving like a man on fire away from the Aryan Brotherhood compound where he’d been held as a slave, cooking meth. He heads straight for the home of Skinny Pete (Charles Baker) and Badger (Matthew Lee Jones), where he cowers like a frightened (and very bushy) rabbit, trying to figure out his next move.

That next move (and the next and the next and the next) form the plot of El Camino, a story about Jesse trying to finally, finally break free of his old life in Albuquerque and find a new one. The “present-day” action takes place over what seems like only a day or two. Jesse hunts for money in the home of his former captor Todd (Jesse Plemons). He begs Ed (Robert Forster) — a.k.a. “The Disappearer,” who helped both Walt and Saul Goodman during the series — to help him get away, even though he’s come up just a little short of the cash needed to do so. He calls his parents; he confronts enemies and (figurative) ghosts; he grows more and more desperate.

Pre-release reporting in the Hollywood Reporter teased that at least 10 characters from Breaking Bad’s original run would return for El Camino, which was a little intriguing, since most of them were dead by the end of the show. The solution, predictably, is flashbacks, which Jesse experiences over and over again. They slow down the action to the point where El Camino’s biggest weakness is that it feels like it’s going nowhere a lot of the time — out of character for a show that always felt as though every scene or joke or line of dialogue served to move the story forward.

Yet for fans, the flashbacks are useful; they help us fill in some of what happened while the show was focusing on Walt near its end and give Jesse even more impetus to flee Albuquerque and start a new life. Among the characters who appear in flashbacks are Todd, Mike (Jonathan Banks), Jane (Krysten Ritter), and Walt himself, all of whom lurk in Jesse’s memory and, most importantly, shape his character.

This Jesse Pinkman is no longer the punky, swaggering kid of Breaking Bad’s early seasons. But he’s not just the wounded, haunted mess of the later ones, either. He is finally starting to come into his own and to realize what he really wants — which is whatever is as far away as possible from where he’s been.

El Camino is a counterpoint to the end of Walter White

In that way, El Camino tries in two hours to give us a counterpart to Walter White’s existential evolution — fitting, since the show always posed Walt and Jesse as following parallel paths but with diametrically opposed slants.

Breaking Bad kicks off with Walt finally deciding to take charge of his life — to act, instead of being acted upon, after being diagnosed with cancer. At every turn, he makes choices that will help him amass more power but that will also corrupt his soul. Those choices eventually transform him into someone who cares very little for anyone other than himself. (Walt is still capable of human kindness by the end — but only barely.)

Jesse, in contrast, starts the series pretty corrupt, and throughout its five seasons struggles to do anything other than get shoved around by Walt or Gus or Hank or his own unfortunate circumstances. He’s trying; that’s what makes him a progressively more sympathetic character as the show goes on. But he just can’t drum up the courage to strike out on his own.

El Camino finally gives Jesse that courage. It feels a bit morally muddled; El Camino seems to suggest early on that Jesse has sworn off violence after the murders he committed that torture him, only to have him kill more late in the film.

But maybe that’s the point it’s trying to make: Jesse will never be free of his past, even if he decides he’ll never handle a weapon again. He’ll always be a man who killed other men. He’ll always be someone who was kept in a cage, who was abused by a mentor, who had not one but two girlfriends die horribly as he was helpless to protect them. He’ll never be free of his scars.

And yet, as Mike says in a flashback scene where he gives Jesse some advice about his future, Alaska is the final frontier. And while making it there won’t erase Jesse’s past, it will give him a chance to start over. After all, when you walk or drive across a fresh snowfall, you leave tracks — but what’s around you covers the dirty ground and makes everything look new.

El Camino: A Breaking Bad Movie is streaming on Netflix and will play in limited theaters October 11-13 (check your local listings).

Netflix’s Conversations with a Killer willfully participates in Ted Bundy’s 3-ring circus
The CDC calls for quarantining even after a negative test. The White House isn’t listening.
George W. Bush honors McCain as “unwavering, undimmed, unequal”
The radical Texas lawsuit seeking to disenfranchise 127,000 voters, explained
Here’s how Covid-19 ranks among the worst plagues in history
I’ve spent the past 52 days in New Hampshire. Here’s what to watch for.