Iran is to blame for its recent aggressive actions. But so is Trump. 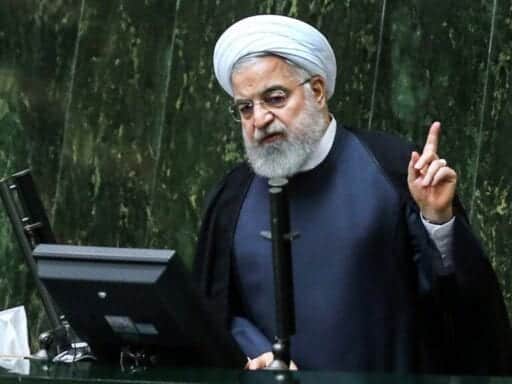 Trump should’ve known what withdrawing from the Iran nuclear deal would bring.

This week alone, Iran vowed to restart research and development on its nuclear program and signaled that it may start to enrich uranium faster. All this came just days after Tehran failed to launch a space rocket in direct defiance of the US and others worried about its missile program.

There’s no question that Iran is acting more aggressively these days. But here’s the thing: nobody should be surprised by this. This is exactly what experts warned would happen if the US pulled out of the Iran nuclear deal.

The 2015 nuclear agreement between Iran and the US, European powers, and China put tight restrictions on Tehran’s nuclear efforts in exchange for sanctions relief. The Obama administration’s goal was to block Iran’s path to a nuclear weapon diplomatically, instead of by force, and effectively bribed Iran with financial incentives to do so.

But President Donald Trump withdrew America from the deal in May 2018, reimposed burdensome financial penalties on Iran, and pushed European countries to cease their business with the country.

Iran therefore had a choice to make: continue to abide by the deal and try to get the international community to compel the US to lower the pressure, or slowly ramp up its nuclear and missile activities to re-exert its own pressure on America.

Iran chose the latter, more aggressive posture — a move the Trump administration should’ve expected. The New York Times Magazine reported this week that the CIA had predicted this exact outcome:

A year before Trump pulled out of the deal, according to an American official, the Central Intelligence Agency circulated a classified assessment trying to predict how Iran would respond in the event that the Trump administration hardened its line. Its conclusion was simple: Radical elements of the government could be empowered and moderates sidelined, and Iran might try to exploit a diplomatic rupture to unleash an attack in the Persian Gulf, Iraq or elsewhere in the Middle East.

The CIA knew Iran was likely to respond forcefully if the US left the nuclear deal, predicting a Middle East crisis would spiral from the withdrawal decision.

None of this excuses Iran’s actions. It could’ve pursued less belligerent methods of dealing with the Trump administration and the added financial pressure. For example, Iranians officials could’ve more closely engaged their European counterparts to find a different way forward, or accepted President Donald Trump’s offer to renegotiate a more stringent deal.

Yet this was the path it chose. Still, while Iran certainly bears much of the responsibility for the current state of things, so does Trump for putting Tehran in that position.

How conspiracy theories like QAnon spilled into the mainstream
The Reason I Jump expands a bestselling book about autism into a sensitive, immersive film
4 health care questions, besides Medicare-for-all, every 2020 Democratic candidate should answer
Vandalism and theft aren’t helping
Trump’s impeachment trial countermessaging has been tasteless and incorrect tweets
What the right fears about Warren’s wealth tax