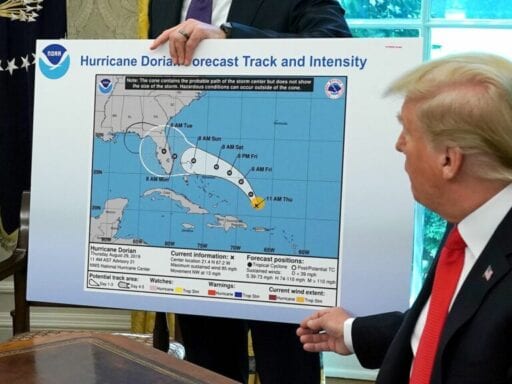 SharpieGate is the worst.

Vice President Mike Pence engaged in some questionable patronage of a Trump property while traveling abroad, the administration shuffled millions away from key government projects (including Puerto Rico recovery) to pay for President Trump’s border wall, and things got real weird with Brexit, but all US media could do this week was talk about a Sharpie-altered map of Hurricane Dorian to prove a Trump tweet about Alabama.

We’re looking at you, CNN, who played right along with Trump in the distraction game.

To back up a bit: This all began on Sunday when the president tweeted a warning about Hurricane Dorian and said that in addition to Florida, “South Carolina, North Carolina, Georgia, and Alabama will most likely be hit (much) harder than anticipated by the storm.” Apparently, he was wrong about Alabama, and the Birmingham National Weather Service quickly corrected him.

It all could have ended there, but of course it didn’t.

On Wednesday, weather reporters and other experts noticed that it looked like someone had drawn an extra little bubble onto a map of the path of a storm in a video of Trump talking about it. People started to wonder whether Trump or someone else had used a Sharpie pen — which the president is known to use — to doctor the map so it looked like he had been right. #SharpieGate was born.

The black outlined area on this very outdated @NHC_Atlantic #Dorian graphic that Trump just used in his update was added and not a part of the official forecast. @WhiteHouse pic.twitter.com/XMQmepPyj6

We still don’t know who doctored the map, or if it was, indeed, doctored. But who cares? We all could have moved on. But, again, we did not. Instead, the president kept insisting he was right on Alabama and agitators kept egging him on. The media covered news about the border wall funding, Pence’s visit to a Trump property, and other big stories this week, but it also kept returning to the Alabama issue — it was one of the main stories CNN covered all of Thursday.

The ordeal, in part, highlights the president’s penchant for lying and his refusal to let even the most trivial items go. But it is also emblematic of the way he’s covered by the media and how outlets such as CNN lean into their antagonism of the White House. The back and forth went as far as the outlet’s Twitter account responding to White House Press Secretary Stephanie Grisham’s tweet noting they’d screwed up an onscreen map that labeled Alabama as Mississippi.

Thanks, Stephanie. Yes, we made a mistake (which we fixed in less than 30 seconds). And now we are admitting it. You all should try it sometime.

Hurricane Dorian’s path and whether it was headed to Alabama

As Politico explains, the National Hurricane Center never offered up a concrete prediction that Hurricane Dorian would hit Alabama, but it gave it small odds of getting tropical storm winds. And computer models suggested it might wind up in the Gulf of Mexico, which would affect Alabama.

But at this point, getting into the timeline of the different predictions does not matter. The hurricane didn’t go to Alabama and the people there are safe! It’s probably been a really confusing week.

Trump made this bad. CNN made it worse.

The president does not like being wrong, so he’s spent a lot of the week insisting that he’s right about Hurricane Dorian and Alabama.

He’s fired off multiple tweets about the matter, and at an event Wednesday about opioid grants, when asked about it by a reporter he said he was confident Alabama had been in the original forecast. “Alabama was hit — if not lightly, in some cases pretty hard,” he said. “Georgia, Alabama, it was a different route. They actually gave that a 95 percent change probability.”

….Instead it turned North and went up the coast, where it continues now. In the one model through Florida, the Great State of Alabama would have been hit or grazed. In the path it took, no. Read my FULL FEMA statement. What I said was accurate! All Fake News in order to demean!

On Thursday, the White House went as far as to release a statement from Rear Admiral Peter J. Brown, Trump’s homeland security and counterterrorism adviser, saying Alabama had been in the path of the storm.

Trump’s insistence that he was right — and SharpieGate — should have been a 5-minute story. But it wasn’t. CNN and other media outlets kept it going. They know Trump is watching, and they like an interactive Trump feud.

CNN has covered the storm, including the damage it’s done in the Bahamas and is now doing in US states that aren’t Alabama, but it’s also spent a lot of airtime on Trump’s weird lie. As mentioned, its Twitter account even offered up a snarky response to the White House press secretary on Twitter.

.@ChrisCuomo: “We’re living in strange times. We’ve got a hurricane … and the President is fighting with the media…”

About a dozen times since Sunday, the President has insisted he was right about Dorian heading toward Alabama.

“It isn’t and never was in any real way.” pic.twitter.com/fXbsS8ItoE

“Unlike the lies about his crowd size or his hand size, this is a lie that has consequences for people in their day-to-day lives so it’s really shocking,” says former NOAA General Counsel Monica Medina on Pres. Trump’s erroneous insistence that Dorian was headed toward Alabama. pic.twitter.com/fmMkOXGEPc

To be sure, CNN isn’t the only outlet covering SharpieGate. Everyone is, us included.

CNN has cultivated a Trump-feud brand

CNN and other broadcasters, including MSNBC and Fox News, are part of what helped Trump’s political career take off in the first place. They showed his rallies for hours and let him play by rules no other candidates did.

But perhaps more than any other media outlet, CNN has really cultivated a brand of antagonism toward Trump. The outlet knows he’s watching, and they know he’ll often play along.

Journalist Jim Acosta has repeatedly publicly clashed with the White House and officials at press conferences while asking difficult questions. At one point, his White House press pass was revoked after a confrontation with the president at a news conference. Trump regularly tweets complaints that CNN and other outlets are fake news and reacts to stories in real time (or when it’s on his TiVo). He knows Acosta and other on-air personalities, including Don Lemon and Chris Cuomo, by name.

CNN’s executives have not been shy about their feuds with Trump being good for business. In 2017, CNN International chief Tony Maddox said the outlet’s performance “has been enhanced during this news period and how we’ve chosen to cover it.”

“I think being called out for fake news by Trump isn’t necessarily the end of the world, in fact the evidence would suggest, as far as media organizations are concerned, it’s not something to worry about,” he said.

In other words, CNN’s animosity toward Trump is making it money.

On Thursday, Lemon defended the network’s coverage of SharpieGate and the Alabama hurricane controversy and acknowledged that the “president’s apologists” say it’s petty. “This is the president of the United States and if you can’t trust what’s coming out of the president of the United States’ mouth, then where are we? Who are we, especially as journalists?” he said.

It’s true that it’s bad that the president is lying, and it’s odd that he keeps insisting on the lie. But the president lies a lot and does plenty of bad things we could focus on that are not this. Instead of talking about, for instance, the fact that the vice president is wasting thousands of taxpayer dollars to stay at a Trump-owned property in Ireland, we’re still talking about Trump and Alabama. And as long as Trump keeps seeing coverage of it on television, he appears determined to keep tweeting about it. On Friday, he demanded the media apologize for its coverage of the ordeal on Twitter.

….This nonsense has never happened to another President. Four days of corrupt reporting, still without an apology. But there are many things that the Fake News Media has not apologized to me for, like the Witch Hunt, or SpyGate! The LameStream Media and their Democrat…..

….partner should start playing it straight. It would be so much better for our Country!

At least there are memes

Between Trump’s insistence on it and the media’s coverage of it, SharpieGate has been absurd. But at least it has delivered some good memes and tweets.

Ladies and gentlemen, I give you the very best of #Sharpiegate !! This sh*t had me wheezing! pic.twitter.com/IYsZU39aOQ

Trump released a poll this morning showing him winning by wide margins against any Democratic opponent. #sharpiegate #SharpiePresident pic.twitter.com/ZIWISAtzl8

The editor of Taco Bell Quarterly explains how to make art out of a fast food brand
The CDC now recommends everyone use cloth masks in public
Biden got nearly two-thirds of the black vote in South Carolina
Iran arrested the UK ambassador for attending a vigil for crash victims
Border district to drop charges against immigrants separated from children, email says
School shooting in suburban Denver, Colorado: what we know