Is Trump guilty of obstructing Congress? I asked a legal expert. 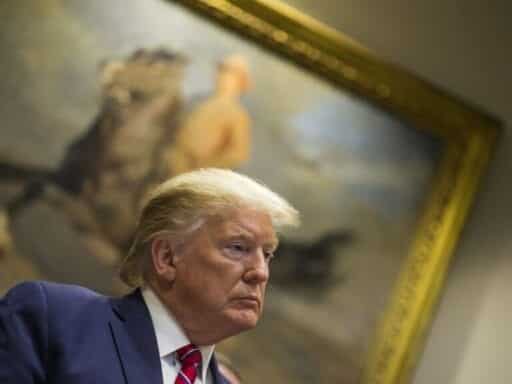 Share
Loading...
President Trump is pictured in the Roosevelt Room at the White House on November 15, 2019. | Zach Gibson/Getty Images

House Democrats have introduced two articles of impeachment against President Donald Trump, both of which are narrowly focused on the Ukraine scandal: The first article charges the president with abuse of power and the second article charges him with obstruction of Congress.

Before today’s announcement, it was unclear whether Democrats would charge the president with obstructing justice during special counsel Robert Mueller’s probe, for which there’s plenty of evidence.

A few weeks ago, I asked Brianne Gorod, who serves as chief counsel at the Constitutional Accountability Center, to explain what obstruction of justice actually means, when it does and doesn’t apply, and if the president has indeed committed it.

And in light of today’s news, I reached out to her once again to ask if obstruction of Congress is actually different from obstruction of justice, and why the distinction matters.

I’ve added her response to the transcript of our previous conversation below.

For purposes of criminal law, there are a number of questions that you have to ask.

One, was there an official proceeding? Two, was there an attempt to obstruct it? And three, did the person act with a corrupt or improper state of mind? That’s the criminal law.

Totally separate and apart from that, there is obstruction of justice as an impeachable offense. In the Constitution, the framers use the language “high crimes and misdemeanors.” And this can be a little confusing because they used that word crime, but they’re not referring to provisions of the US criminal code.

What they were talking about there were abuses of the public trust. Officials, including the president, using their powers in an effort to benefit themselves rather than the nation. And so it’s important to keep those two things separate because there can be obstruction of justice that is impeachable and warrants an official’s removal from office, totally apart from the question of whether the criminal law has been violated.

What sorts of actions would be considered obstructing justice?

Everything seems to turn on this notion of “improper purpose,” or the other phrase I hear often is “corruptly influence.” What are the kinds of things that prosecutors would look at to determine whether someone was “corruptly” influencing an investigation or acting with “improper purpose”? How do you prove intent?

That’s a tricky question across the span of criminal offenses. After all, how do you prove what was going on in someone’s mind?

But courts can also look at circumstantial evidence to understand what was motivating the person. And so the question at the end of the day is, in the context of a criminal prosecution, can the prosecutor prove beyond a reasonable doubt that this person was acting with an improper purpose? Were they trying to prevent this investigation from going forward in the way that it should have with an improper reason in mind?

The obstruction statute doesn’t require that justice was actually obstructed — only that the person endeavored to impede justice, right?

That’s absolutely right. And it’s true for the criminal code and it’s true for impeachment as well. There’s certainly no requirement that the person who was trying to object instruct justice had to be successful. The point is that they were trying to interfere with an investigation.

In the case of Trump, for example, there are a lot of indications that he tried to obstruct and his subordinates didn’t listen to him and didn’t follow his commands. But that doesn’t matter. The American people should not have to hope that the president’s subordinates won’t listen to his directions.

Is obstruction of justice impeachable on its face?

And so if a president is willing to abuse the official powers of his office to prevent the American people from knowing the truth, from knowing what happened, that’s deeply corrosive to our system of government.

The Democrats have now charged Trump with “obstruction of Congress.” How is that different from obstruction of justice? And why does the distinction matter?

Is the president guilty as charged in your opinion?

The House’s resolution certainly makes out a compelling case that the president has been obstructing Congress, focusing in particular on the unprecedented nature of his obstruction.

As the resolution says, “no president has ever ordered the complete defiance of an impeachment inquiry or sought to obstruct and impede so comprehensively the ability of the House of Representatives to investigate ‘high Crimes and Misdemeanors.’”

There is real irony in the president abusing executive power to undermine the very constitutional process the nation’s Founders intended as a check on abuses of executive power.

Do you buy that in any way?

Absolutely not. I think that gets it fundamentally wrong. The founders included impeachment as a check on the presidency precisely because they recognized how many powers the president had and they recognized that those powers could be subject to abuse.

There are any number of powers that the president has that are lawful, but if you use them for improper purposes, if you use them to try to impede an investigation, to try to prevent the American people from learning the truth, that can itself be impeachable and it doesn’t matter whether it’s a power that the president could use for a lawful purpose.

If I am a Republican voter or lawmaker who generally approves of the job that Trump is doing, why should I be concerned that he is obstructing justice? Why, in other words, is this a problem worth worrying about?

Because the kind of abuses that the president has engaged in are deeply corrosive to our system of government. And I would imagine that Republicans, if the party labels were turned around, would be deeply disturbed by the idea of a Democratic president trying to encourage foreign interference in our elections, trying to encourage or prevent an investigation designed to uncover the truth of that.

Our constitutional system depends on checks and balances. It depends on the precept that no one including the president is above the law. And that’s something that everyone across both sides of the aisle should be able to agree on.

Sean Spicer’s book misleads about 2 events Mueller is investigating
The paradox of Nikki Haley
Why “Zendaya Is Meechee” became the feel-good pop meme of the moment
Poll: Biden is ahead in Iowa, but Warren and Buttigieg are coming up strong
This is a time for solidarity
This viral chart doesn’t explain much about middle-class living standards