Obamacare had an unusually good day at the Supreme Court 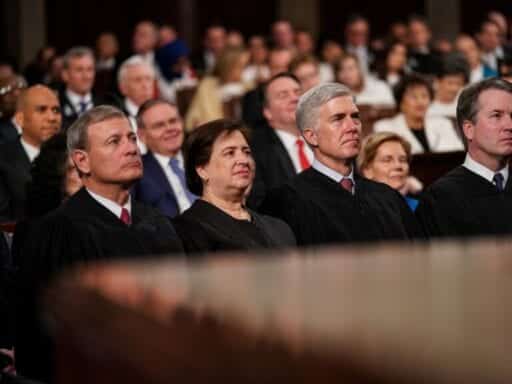 Share
Loading...
Supreme Court Justices John Roberts, Elena Kagan, Neil Gorsuch, and Brett Kavanaugh attend the State of the Union address in the chamber of the US House of Representatives at the US Capitol Building on February 5, 2019, in Washington, DC. | Doug Mills-Pool/Getty Images

As many as six justices appeared bothered by a Republican effort to undercut the Affordable Care Act.

A trio of Supreme Court cases consolidated under the name Maine Community Health Options v. United States may fairly be described as the first “normal” Obamacare case to reach the Supreme Court.

They do not involve an existential attack on the Affordable Care Act, and they did not arrive on the justices’ doorstep after months of political turmoil over how the courts should resolve these cases. And during arguments Tuesday, a majority of the justices appeared to treat Maine Community as what it is — a difficult dispute about how the government makes promises and whether it is required to keep them, rather than as an opportunity to retreat into partisan camps.

Maine Community involves about $12 billion in payments owed to health insurers under a program known as “risk corridors.” Obamacare’s risk corridors program sought to encourage insurers to enter an uncertain new market by agreeing to reimburse a portion of their losses if the insurance company set premiums too low.

After many insurers agreed to sell plans on the Obamacare marketplace, Congress enacted a provision in an appropriations bill — a provision known as a “rider” — seeking to prevent the government from making most of the payments under the risk corridor program. The question in Maine Community is whether the government is still obligated by the Affordable Care Act’s original promise to make these payments, or whether the rider effectively ended the requirement.

A bipartisan mix of justices, including Chief Justice John Roberts, Justice Ruth Bader Ginsburg, and Justice Samuel Alito, all had difficult questions for Paul Clement, the lawyer representing the insurers. Ginsburg, in particular, asked whether Obamacare’s language, which provides that the government “shall pay” its obligations under the risk corridor program, also permits the insurance companies to sue the government if the money is not paid.

Yet only Alito appeared to be a certain vote against the insurers. By the end of arguments, six justices — Roberts and Ginsburg, plus Justices Stephen Breyer, Sonia Sotomayor, Elena Kagan, and Brett Kavanaugh — all appeared likely to rule in favor of the insurers. Neither Justice Clarence Thomas nor Justice Neil Gorsuch spoke up during the session.

Risk corridors are intended to protect insurers against catastrophic losses

Insurance companies operate on a fairly basic model. People who fear some kind of unfortunate event agree to pay premiums to the insurer. If that event actually happens, the insurer then pays at least some of the customer’s costs.

The danger for insurance companies is that, if they set premiums too low, they can potentially be obligated to pay for costs that vastly exceed the amount of premiums they’ve brought in. For this reason, insurers are often reluctant to enter new markets because they may not know enough about that market to set appropriate premiums.

Moreover, as Roberts noted at one point Tuesday, a major purpose of the Affordable Care Act is to provide insurance to people “who were otherwise uninsurable.” So insurance companies who agreed to sell Obamacare plans were wading into a particularly uncertain marketplace — and thus would ordinarily be reluctant to participate at all.

The risk corridor program was designed to alleviate some of this reluctance. Under the program, insurers that set their premiums too high paid a percentage of their excess profits to the government. Insurers who set their premiums too low, meanwhile, are reimbursed a percentage of their losses. This was a temporary program, which expired after three years.

The idea was to make the Obamacare exchanges a safe market for insurers to enter so that more insurance companies would follow suit.

But then Congress pulled the rug out from under these insurers. After many health insurers had already entered the Obamacare marketplace, Congress — at the insistence of Republican leaders — enacted riders that prevented the government from using any money from annual appropriations bills to provide risk corridor payments.

The central question before the court was whether such a lopsided regime was permissible — or, at least, whether the rider actually did strip the government of its obligation to make the risk corridor payments.

The insurers are likely to prevail

Though Clement did face several pointed questions while he was at the podium, the tone of the argument shifted abruptly after Deputy Solicitor General Edwin Kneedler stepped up to argue that the government is not obligated to make the risk corridor payments.

Very soon after Kneedler started talking, Breyer presented him with a hypothetical familiar to many law students: Suppose someone says they will pay you $10 if you retrieve a hat that’s stuck on top of a flagpole. If you then climb the flagpole and retrieve the hat, that creates a binding contract — the person who said they would pay you to retrieve the hat is obligated to pay you $10.

Why, Breyer asked, is Maine Community any different? Here, the government asked health insurance companies to perform a specific action — sell insurance plans on the Obamacare exchanges — and the government said it would offer those insurers risk corridor payments if they did what the government asked them to do. That, Breyer suggested, creates a contract that is no less binding than the one involving the hat and the flagpole.

A majority of the court appeared to agree with Breyer that the rider did not shut down the government’s original obligation to pay. Kagan noted that the promise to make risk corridor payments “induced a kind of reliance” on the part of insurers. Roberts similarly suggested that insurers would not have entered the Obamacare marketplace in the first place if the government didn’t promise reimbursement under the risk corridor program. Sotomayor suggested that the text of the Affordable Care Act required the Department of Health and Human Services to enter into binding agreements with insurers under the program.

Congress, Kavanaugh noted, knows how to write a law that makes a payment contingent on appropriations. That’s not what it did in this case.

All in all, it seems likely the government will need to make the $12 billion in unpaid risk corridor payments. That’s good news for Obamacare supporters, and it’s very good news for insurers who took on considerable financial risk because of a promise the government has yet to keep.

The controversy around the White House banning a CNN reporter, explained
Mexico’s coronavirus-skeptical president is setting up his country for a health crisis
A record number of women could be elected to the House this fall
Supreme Court won't hear new case from North Carolina on partisan election maps
Big Little Lies season 2, episode 3 recap: Hail Renata, the Medusa of Monterey
The FBI released records on Carter Page surveillance. It thought he was being recruited by Russia.