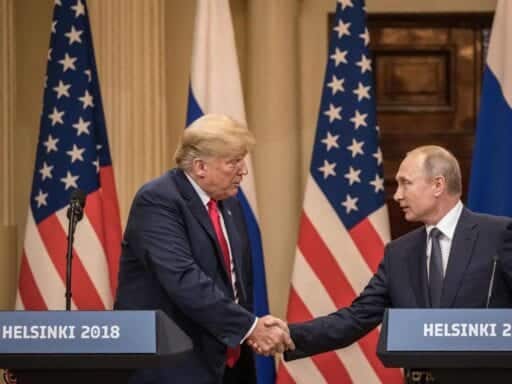 Trump is hard on traditional allies and soft on Putin because that’s what he thinks.

Asked point-blank by a Reuters journalist, “Do you hold Russia at all accountable for anything in particular” that has contributed to the decline in the US-Russia bilateral relationship, President Trump delivered the defining answer of his foreign policy: He does not.

Having offered earlier in the week scathing, specific indictments of the European Union’s immigration policy, of the FBI’s investigation of the 2016 election, of the United Kingdom’s efforts to negotiate a “soft” version of Brexit, and of Germany’s energy infrastructure policies, Trump had no specific criticisms of Vladimir Putin’s domestic or international policies.

He did not object to Putin’s domestic repression, to Russia’s 2008 effort to dismember the former Soviet republic of Georgia, to Russian-backed forces shooting down Malaysia Airlines Flight MH-17 and killing hundreds of civilians, to Russia’s invasion of Crimea or subsequent invasion of Eastern Ukraine, to Russia’s apparent use of a deadly nerve agent in the UK, or (of course) to the computer hacking associated with the 2016 election.

Trump’s staff keeps trying to cover for him, by leaking to the press various versions of a story in which Trump has basically normal policy views but happens to not be fired up about the election hacking, but Trump’s words say otherwise. It’s true, of course, that he’s not bothered by Russians committing crimes to help him win the election. But he’s also not bothered by anything Putin does at all, which is why he was worth helping in the first place.

via @jonathanvswan – President Trump no longer doubts the basic intelligence assessment that Russia interfered in the 2016 election — he just seems incapable of taking it seriously, and tells staff that is simply what nations do. https://t.co/0pAIIMUcGp

But most of all, it’s worth taking Trump on Russia literally, not as the offhand ramblings of an ignorant celebrity candidate but as reflecting essentially the closest thing to a considered policy view that we are going to get from Trump.

It’s worth reading Trump’s full answer to the question about whether he holds Russia accountable for anything in particular just to see how long the answer is — how much time he had to think of something, and the extent to which the only specific wrongdoing he can name is on the part of the FBI for conducting an investigation of Russian crimes (emphasis added):

Yes, I do. I hold both countries responsible. I think the United States has been foolish. I think we have all been foolish. We should have had this dialogue a long time ago, a long time, frankly, before I got to office. I think we’re all to blame. I think that the United States now has stepped forward along with Russia. We’re getting together and we have a chance to do some great things, whether it’s nuclear proliferation in terms of stopping, we have to do it — ultimately, that’s probably the most important thing that we can be working on.

I do feel that we have both made some mistakes. I think that the probe is a disaster for our country. I think it’s kept us apart. It’s kept us separated. There was no collusion at all. Everybody knows it. People are being brought out to the fore. So far that I know, virtually, none of it related to the campaign. They will have to try really hard to find something that did relate to the campaign.

That was a clean campaign. I beat Hillary Clinton easily and, frankly, we beat her. And I’m not even saying from the standpoint — we won that race. It’s a shame there could be a cloud over it. People know that. People understand it. The main thing — and we discussed this also — is zero collusion. It has had a negative impact upon the relationship of the two largest nuclear powers in the world. We have 90 percent of nuclear power between the two countries. It’s ridiculous. It’s ridiculous what’s going on with the probe.

Later, asked specifically about Russian-backed hackers stealing Americans’ private correspondence, Trump said, “My people came to me, [Director of National Intelligence] Dan Coats came to me, and some others, and said they think it’s Russia. I have President Putin; he just said it’s not Russia. I will say this. I don’t see any reason why it would be, but I really do want to see the server. But I have confidence in both parties.”

That’s the president of the United States saying he has equal confidence in the president of Russia and the American intelligence community. It’s a politically baffling thing to say — so baffling that I don’t buy the common hot take that Trump’s slipperiness on this question merely reflects resentment at having the legitimacy of his election win challenged. After all, all he’s doing with this kind of rhetoric is undermining his own position.

Fox’s Kilmeade explains that Trump sees every Russian interference question as an accusation that his victory wasn’t legitimate. So he can’t say: Yeah, they interfered. I am quite sure this is exactly right.

The simplest explanation for why a president who happily outsources his domestic policy to Paul Ryan and his judicial nominations to the Federalist Society insists on freelancing around Russia is that there is a genuine meeting of the minds between Trump and Putin across a broad range of issues.

Russia hawks in the United States and Europe have long been concerned about German plans to build a natural gas pipeline, known as Nord Stream 2, that would give Russian fossil fuels more access to the European market. Trump, who often likes to criticize Germany but rarely likes to criticize Russia, surprised many observers by criticizing this pipeline at the NATO summit in Brussels late last week.

It seemed, superficially, like Trump was finding a way to integrate his passion for making trouble for German Chancellor Angela Merkel with something resembling a normal American foreign policy. But such hopes were quickly dashed by his performance in Helsinki.

Trump repeatedly railed against the Nord Stream 2 pipeline between Russia and Germany, asking why the US should protect Germany from Russia when Berlin purchases so much gas from Moscow. Putin won’t like that line one bit. Interesting to see if it comes up in Helsinki pic.twitter.com/j019Mi4lJl

Asked by a Russian journalist about both the pipeline and how he would characterize the US-Russia relationship, Trump made it clear that his concern about the pipeline isn’t that it would give Russia undue political leverage over Germany but simply that it would be bad for American fossil fuel interests:

I called him a competitor, and a good competitor he is. I think the word competitor is a compliment. I think that we will be competing when you talk about the pipeline. I’m not sure necessarily that it’s in the best interests of Germany or not. That was a decision that they made. We will be competing. As you know, the United States is now, or soon will be, but I think it is right now the largest in the oil and gas world. So we’re going to be selling LNG. We’ll have to be competing with the pipeline. I think we will compete successfully. Although there is a little advantage locationally. I wish them luck.

I discussed with Angela Merkel in pretty strong tones. But I also know where they’re coming from. They have a very close source. We will see how that all works out. But we have lots of sources now. The United States is much different than it was a number of years ago when we weren’t able to extract what we can extract today. So today, we’re number one in the world at that. I think we will be out there competing very strongly. Thank you very much.

Trump’s view on the relationship of NATO to Nord Stream is so stupid that it’s almost hard to believe this is what he’s saying, but it’s consistent with his overall worldview.

While a normal US leader might worry that Russo-German energy ties would undermine Germany’s ability to lead an independent Europe on a political level, Trump’s objection is clearly backward — he doesn’t think it’s worth America’s while to contribute to Europe’s defense via NATO if Europe is going to turn around and buy Russian gas. He defines Russia as a “competitor” to the United States exclusively in the commercial sphere rather than the geopolitical one.

That’s why he called the European Union a “foe” in much stronger terms — on the level of competition for export markets, Europe really is a bigger competitor than Russia.

If you view world affairs through an exclusively mercantilist lens, as Trump does, then America’s closest allies (mostly rich democracies) are our biggest enemies and deterring Russian expansionism is a waste of time and money. It’s time to accept that this is what Trump really thinks and that he is governing accordingly.

Trump is constrained, but he’s getting stronger

It’s easy to forget now, but Trump entered the White House with an unprecedentedly low level of support from his own party.

A dozen Republican senators and a gaggle of vulnerable House members refused to say that they were voting for him, while Speaker Ryan said he would no longer defend or campaign with Trump. And Trump as a candidate was personally hostile to a number of established GOP figures, and expressed heterodox views on a wide range of policy issues. In theory, that could have set up an unusual political dynamic in which congressional Republicans subjected Trump to an uncommonly stringent level of oversight for a same-party president, and Trump engaged in an uncommonly high level of policymaking that cut across established party lines.

Instead, Trump and GOP leaders rather quickly reached a tacit compromise — no restraint whatsoever on Trump’s personal corruption or financial conflicts of interest, and no attempt by Trump to pursue the heterodox agenda on infrastructure, health care, antitrust, etc. that he promised on the campaign trail.

The deal has worked well on domestic issues, culminating in the nomination of Brett Kavanaugh to succeed Anthony Kennedy on the Supreme Court. But on foreign affairs, it’s begun to fall apart after a mostly successful 2017. Coats, Defense Secretary James Mattis, and others with conventional conservative Republican views hold the key advisory jobs in the Trump administration, but Trump is clearly not interested in actually taking their advice because he thinks that advice is wrong.

He is acting to unravel America’s global trading relationships, doing what he can to undermine NATO and the European Union, trying to find an excuse to wriggle out of defense obligations to South Korea, and otherwise implement the mercantilist vision he articulates over and over again.

It’s time to stop psychoanalyzing Trump’s statements — and time for congressional Republicans to stop issuing toothless statements denouncing them — and take this seriously as the president’s governing agenda.

Mysterious Havana syndrome attacks are now documented in the US
House Democrats accuse Republicans of shutting down Hurricane Maria investigation
The many strange long-term symptoms of Covid-19, explained
9 great 2-player board games
What to make of Trump’s “new tone” at the Covid-19 briefings
A preliminary Trump administration plan shows how far America is from reopening