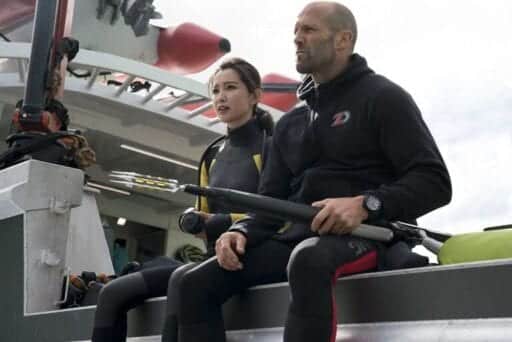 Share
Loading...
Halfway through The Meg, I squinted at my notes and realized I’d just been writing down names of other blockbusters I’d seen this summer. And in the case of The Meg (a.k.a. Jason Statham Fights a Giant Prehistoric Shark), that’s a feature, not a bug.

To call the film “derivative” isn’t pejorative; it’s kind of the point. The Meg is a shark movie (a well-established and dearly loved summer blockbuster subgenre since Jaws codified it in 1975) starring Jason Statham (an action subgenre unto himself) that never gets too ambitious, despite the size of its “monster,” as several people call the shark. There’s some sluggish action, a little tension, a few clearly telegraphed jump scares, a bit of romance, a cute kid, and some blandly conceived wisecracks nestled into blandly conceived dialogue.

What results is a film that’s both eminently watchable and eminently skippable. Based on the novels by Steve Alten, The Meg may be the Platonic ideal of a big, brainless summer movie: fun to watch and very easy to forget. It’s exactly the movie you’re expecting.

When big, mean, angry prehistoric shark turns out to not be so prehistoric

In a sense, The Meg’s predictability works in its favor; late-summer entertainment often seems engineered to give people an excuse to enjoy overactive air conditioning for a few hours without having to think too hard about what’s playing in front of them. But it’s also a bit of a shame, since the posters for The Meg suggested something epic, visually stunning, and a tad quippier — both a shark movie and a feature-length joke about shark movies.

Instead, in the hands of Jon Turteltaub (National Treasure), it’s just a shark movie, and a kind of inert one at that.

The titular Meg is a megalodon, a theoretically extinct 90-foot shark that could bite a whale in half and had no natural predators. Well, you’ve guessed correctly: It’s not so extinct anymore! Turns out the Meg has been lurking in a previously undiscovered area of the deep seas and is inadvertently loosed by a deep sea exploration team based on a deep-sea exploration rig and bankrolled by a rich guy named Morris (Rainn Wilson).

A number of scientists and specialists are working on the rig, the most experienced and prominent of whom is Zhang (Winston Chao) and his daughter, Sunyi (Bingbing Li), a single mother who brought along her own precocious daughter Meiying (Shuya Sophia Cai). Three of them, Lori (Jessica McNamee), Toshi (Masi Oka), and a fellow everyone calls “The Wall” (Ólafur Darri Ólafsson) venture into the Meg’s lair and get trapped there, while up on the rig the others — including Mac (Cliff Curtis), Jaxx (Ruby Rose), DJ (Page Kennedy), and the team’s physician Heller (Robert Taylor) panic.

To rescue them, they decide to call in Jonas Taylor (Jason Statham), who’s been lying low in Thailand for seven years after a botched deep-sea rescue attempt that he maintains was thwarted by a giant shark. He’s resistant, but he eventually agrees to go rescue the crew (and as it turns out, Lori is also his ex-wife; the world of deep-sea exploration is apparently a small one).

From there, The Meg follows a predictable path. People get into trouble because of the big angry shark that’s now at large in the sea. People are rescued. People are put in danger again. Rinse and repeat.

The Meg is basically all of this summer’s blockbusters crammed into one movie, then made much blander

What’s most remarkable about The Meg is nothing in particular about the film itself, but how often it calls to mind things that are not The Meg, and not even about sharks at all. There’s the obvious Moby-Dick reference (you can’t have a dude hunting a deep-sea creature with fins without hauling in Ahab and his whale obsession) and a quick, glorious callback to one of the most famous fish movies of our time too. But parallels to other summer blockbusters are what animate The Meg.

For instance, the idea that huge monsters driven purely by rage and never before seen by modern eyes lurk in a world of their own, separated from us only by a thin, permeable layer, is the basic setup for the Pacific Rim movies, including this summer’s Pacific Rim Uprising. But while this can be a splendidly fantastical apocalyptic framework, with lots of room for fascinating world-building, in The Meg, that construct is set aside pretty rapidly. (I for one would like to see more of what else lurks down here, but maybe they’re saving it for the sequel.)

Wait: You say the monsters are prehistoric? Well, well — Jurassic World: Fallen Kingdom has a thing or two to say about that. Both movies also have greedy megalomaniac guys with a curious, ill-advised penchant for the teeth of their conquered prey. But while I wasn’t much of a fan of Jurassic World: Fallen Kingdom, its best sequences come when the film tilts into becoming an actual horror movie — as did, for instance, a film like Jaws. The Meg, however, never gets there. Despite the repeated dubbing of the shark as a “monster,” it feels most like an adventure movie, and lacks any notable thrills or chills.

There’s a handful of comparisons to be made between Mission: Impossible — Fallout and The Meg too. The former’s a much better film, but they’re both big action movies with big set pieces, and they both star action stars who famously chafe at using stunt doubles. Both also feature incredibly pleasant ex-wives encouraging those stars to pursue a relationship with the film’s romantic lead, which feels very congenial and warm.

And the most revealing comparison comes from the fact that The Meg is another addition to Hollywood’s ongoing attempts to rake in cash from audiences around the world. Its cast, which draws on stars from at least three continents, makes that clear. Though most of its dialogue is in English, and its lead cast is predominately English-speaking, its locations are all Asian — not wholly unlike Skyscraper, as well as the Pacific Rim movies. Like those movies, it also employs a joke in which an American tries to speak an Asian language (Chinese or Japanese) but does so badly, which suggests we’ve finally found a joke that crosses all borders.

But more importantly, this summer’s films have been a testament to how hard Hollywood is trying to make its blockbusters appeal to everyone, everywhere. It sort of makes sense: Big-budget movies need big box office returns. And in some cases, the result is also a good movie. And, hey, giant monster movies originated in Asian cinema, so in a sense, this is just extending a long international film tradition.

And yet the danger in trying to appeal to everyone is that you’ll appeal to nobody, and The Meg too often succumbs to this. (It’s telling that the best joke in the movie is a reference to a beloved film aimed specifically at children.) There’s little adventure in this adventure tale. Its monster isn’t really all that scary. The jokes aren’t funny, and the dialogue that’s meant to be touching feels lifted out of most any other film. You keep waiting for something big to happen, but whenever something does, you can see it coming from a mile away, like some giant, slow-moving prehistoric threat.

There’s admittedly some charm to The Meg striving to remain so strenuously bland, but it ultimately feels like empty nostalgia for whatever it’s echoing. The Meg may be the perfect summer movie for right now, fun enough to sit through for a couple of hours. But it’s unlikely to have much of an impact — or even be remembered — past the end of the season.

Trump’s new communication tool is more like a blog
John Bolton says he’ll testify in Trump’s impeachment trial if subpoenaed
2020 Democratic candidates aren’t happy about new debate rules that seem to benefit Bloomberg
Vox Sentences: The caravan reaches Mexico
“This is not normal”: Cory Booker calls out Republicans rushing Amy Coney Barrett’s Supreme Court he...
Social distancing won’t just save lives. It might be better for the economy in the long run.