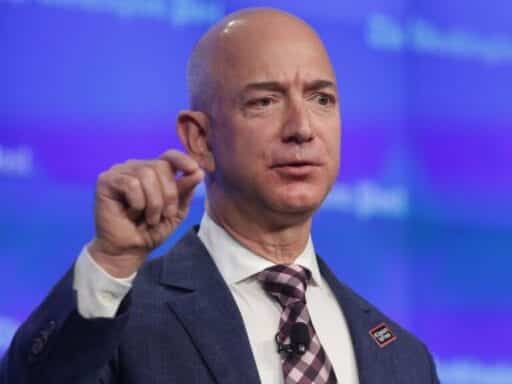 The Amazon CEO has pushed back on environmental criticisms and concerns over Amazon’s treatment of its sellers.

Amazon is facing mounting — and varied — criticisms from multiples sides, on topics ranging from how it competes with its own sellers to the company’s environmental impact.

And CEO Jeff Bezos has found a peculiar place to offer his counterarguments: Amazon’s financial filings.

On Thursday, Amazon announced its financial results for the third quarter of 2019, which sent shares of its stock down as much as 9 percent thanks to soaring shipping costs that resulted in smaller-than-expected profits.

But one of the more interesting nuggets in the company’s earnings release had nothing to do with financial results; instead, it was this quote attributed to Bezos about Amazon Prime’s transition from two-day shipping to one-day shipping: “[A]lthough it’s counterintuitive, the fastest delivery speeds generate the least carbon emissions because these products ship from fulfillment centers very close to the customer — it simply becomes impractical to use air or long ground routes.”

If you were wondering when the last time was that Amazon used the phrase “carbon emissions” in a press release about financial results and guessed that the answer might be “never” … well, you’re probably right. Amazon has otherwise never used those words in an earnings release going back to 2005, and it’s highly unlikely it did so in years prior to that.

So why now? Thursday’s earnings report comes just a month after more than 1,500 Amazon corporate employees walked off the job to highlight their dissatisfaction with the company’s environmental impact. That walkout happened a day after Bezos announced a series of climate-related promises, including vowing to be carbon-neutral by 2040, in a thinly veiled attempt to seize the news cycle from his employees.

A recent Recode report also revealed that Amazon is making it easier for Prime customers to get free one-day shipping on super-cheap items, even when they aren’t bundled in the same order with other products. That change has raised concerns about the negative environmental consequences of express shipping services.

In another rare move, Bezos earlier this year used his annual letter to Amazon shareholders to highlight data that attempts to respond to criticisms that Amazon competes unfairly against its own sellers and that the company is too dominant. Those criticisms are at the center of antitrust probes — some formal and some in fact-finding stages — in both Europe and the US. “Third-party sellers are kicking our first-party butt,” Bezos wrote in one section of the letter that showed third-party sellers own a growing share of overall Amazon sales, reaching 58 percent in 2018.

The letter also stressed Amazon’s relatively small market share when taking into account physical retail store sales in addition to online shopping. “Amazon today remains a small player in global retail,” Bezos wrote. “We represent a low single-digit percentage of the retail market, and there are much larger retailers in every country where we operate.”

Some antitrust experts argue that’s not the right way to judge Amazon’s power and that looking at Amazon’s control over specific product categories might be more relevant.

Either way, it’s clear Amazon is acutely aware of the major criticisms it is facing from politicians, Amazon sellers, and even some of its own employees. And it wants Wall Street investors and the media — the main audiences for earnings releases — to hear its side.

How a year of publishing protests rocked the industry
The debate over Donald Trump’s alleged n-word tape, explained
“Life is too short”: 5 people who made bold decisions during the pandemic
Democrats in Iowa look to veteran politicians Biden and Sanders for 2020
What happens when you go coronavirus viral
A new Senate report is the latest threat to NRA’s tax-exempt status — and maybe its survival