John Bolton is in talks to testify in the impeachment inquiry 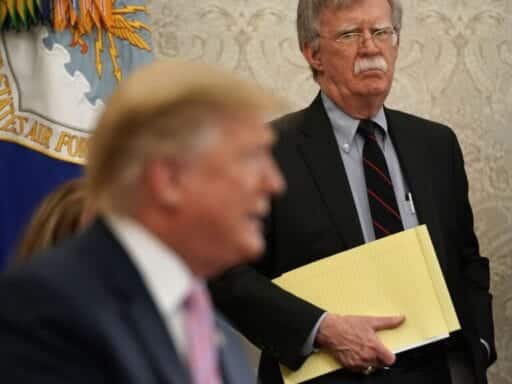 This is very bad news for Trump.

Readers, this is the moment you’ve all been waiting for: John Bolton is in talks to testify in the impeachment inquiry.

According to multiple reports on Thursday and Friday, the former national security adviser’s lawyers have spoken with the three Democratic-led House committees about a potential deposition. If that happens, he would be by far the most high-level witness to testify, possibly giving investigators the most authoritative account of President Donald Trump’s policy toward Ukraine.

This is very bad news for Trump. The president and Bolton had a contentious relationship that spilled out into the open after the top aide left the administration: Trump said he fired Bolton, but Bolton clapped back saying that he resigned. That means Bolton is unlikely to protect the president and instead will recount what he saw inside the government as truthfully as he can.

He surely has some explosive things to say. After all, he was on the infamous July 25 call between Trump and Ukrainian President Volodymyr Zelensky in which the American leader requested a “favor” in exchange in for investigations into Joe Biden’s family and Democrats. What’s more, two separate witnesses in the impeachment inquiry noted that Bolton felt the pressure campaign on Ukraine was highly inappropriate.

In her testimony last week, former National Security Council Director for European Affairs Fiona Hill recounted a July 10 meeting with senior Ukrainian officials that she, Bolton, and US ambassador to the EU Gordon Sondland attended. Per her statements, Sondland brought up the investigation, leaving those in the room with no doubt that he wanted the Ukrainians to look into the Bidens.

Bolton afterward told Hill to speak with top NSC lawyer John Eisenberg about his own discomfort with what Sondland said and the Ukraine plan he, Giuliani, and acting Chief of Staff Mick Mulvaney were executing.

“I am not part of whatever drug deal Sondland and Mulvaney are cooking up,” Bolton told Hill, according to the New York Times reported last week. Apparently, Bolton was already upset at Rudy Giuliani, the president’s personal lawyer, for leading his own policy to Ukraine outside official channels. “Giuliani’s a hand grenade who’s going to blow everybody up,” Hill recalled Bolton saying in a previous conversation.

But that’s not all. Tim Morrison, who now has the top European affairs jobs in the NSC, is also likely to testify soon. He’s a strong Bolton ally, their partnership held together by their mutual distrust of arms control. Morrison is expected to back up what some previous witnesses have said, including testimony from the top US diplomat to Ukraine William Taylor who implicated Trump in the Ukraine scheme.

Which means Bolton could piggyback off of Morrison, Taylor, Hill, and others’ testimony and continue to paint a dark picture about the administration’s plan to withhold military aid to Ukraine in exchange for the investigations into the Bidens.

If Trump thought things were bad now, he’d be forgiven for thinking it could get a whole lot worse for him soon.