Jeff Sessions laughs at “lock her up” chants, briefly repeats the line 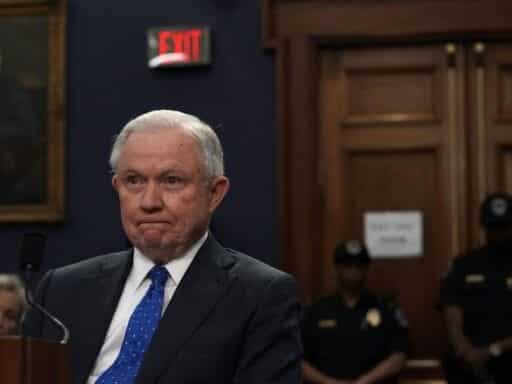 Attorney General Jeff Sessions seemed to get quite the kick out of high school students chanting, “Lock her up!” at a leadership conference in Washington, DC, on Tuesday. So much so that he decided to repeat the chant himself for a second.

The former US senator from Alabama was speaking at Turning Point USA’s High School Leadership Summit on Tuesday about defending the Constitution and the rights it protects when a chant of “lock her up” broke out. The refrain became a familiar one during the 2016 presidential campaign as a call for then-Democratic candidate Hillary Clinton to be jailed, and it’s continued to pop up at conservative events and rallies since the election.

Sessions laughed as the students began chanting, and at one point repeated the line himself. “Lock her up,” he said. “I heard that a long time on the last campaign.”

“Lock her up,” Attorney General Jeff Sessions says with a laugh as chant breaks out during high school leadership summit. https://t.co/dMeVjlPoyT pic.twitter.com/mTHkXTcOMk

That Sessions, the United States’ top law enforcement officer, would so lightheartedly approach calls for the jailing of one of the president’s political opponents is disturbing, or at the very least, in bad taste.

Every Republican voted for Jeff Sessions.

Let me guess, Trump is ok with this political bias in the DOJ: https://t.co/vpA247goMF

As the Washington Post points out, Sessions as the head of the Justice Department has resisted calls to investigate Clinton, including over her use of a private email server as secretary of state. He has rejected calls for a special counsel to probe Clinton.

During the same speech on Tuesday, the 71-year-old Sessions criticized universities for “coddling” young people and said schools were silencing conservative voices to create a “generation of sanctimonious, sensitive, supercilious snowflakes,” adopting lines of critique many Republicans use to argue that college campuses are too accommodating, specifically, to liberal-leaning students and ideas.

“Well, I can tell this group isn’t going to have to have Play-Doh when you get attacked in college and you get involved in a debate,” Sessions said, per CNN. “I like this bunch, I gotta tell you. You’re not going to be backing down. Go get ’em. Go get ’em.”

US Ambassador to the United Nations Nikki Haley in a speech ahead of Sessions at the same event on Tuesday took a different approach.

She encouraged students to avoid online behavior meant to “own the libs,” meaning making comments or taking actions meant specifically to upset or anger liberal-leaning people. “I know that it’s fun and that it can feel good, but step back and think about what you’re accomplishing when you do this — are you persuading anyone? Who are you persuading?” she asked, according to a report from the Hill. “We’ve all been guilty of it at some point or another, but this kind of speech isn’t leadership — it’s the exact opposite.”

She and Sessions may want to have a chat.

The House will take its first vote on the impeachment inquiry later this week
Amy Klobuchar deserves a closer look from electability-minded Democrats
How Watchmen’s giant squid attack changes everything
After Obama, Democrats need a new theory of change. Pete Buttigieg thinks he’s got it.
The pandemic is forcing Democrats to ask: How important is door-knocking, anyway?
Is Tom Steyer the problem — or the solution?