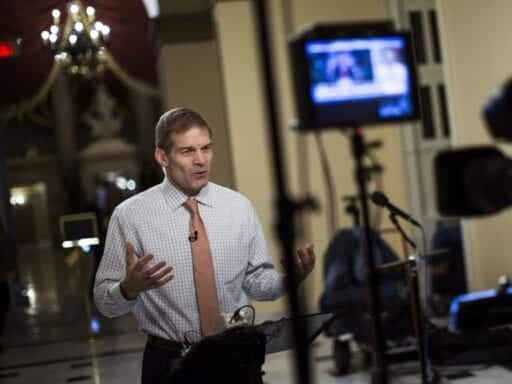 Former athletes say Jim Jordan knew about sexual abuse at Ohio State when he was an assistant wrestling coach there years ago and did nothing.

Rep. Jim Jordan (R-OH) hasn’t backed down in the face of allegations he ignored the sexual abuse of athletes and students by a former team doctor during his tenure as the assistant coach of Ohio State’s wrestling team from 1986 to 1994.

“It’s false. I never saw, never heard of, never was told of any kind of abuse,” Jordan told Fox News’s Bret Baier on Friday. “If I had been, I would’ve dealt with it.”

“We would’ve dealt with it if we knew of anything that happened,” he continued.

At least five men have come forward to accuse Dr. Richard Strauss, a former team doctor at Ohio State who killed himself in 2005, of molesting them, and said Jordan was aware of the misconduct. One wrestler, Mike DiSabato, said he knew Jordan was aware because it was something the athletes regularly discussed, “mainly with nervous banter, locker room banter.”

“Conversations in a locker room are a lot different than allegations of abuse, or reported abuse to us,” Jordan responded, seeming to imply that if he did hear anything in that venue, it wasn’t to be taken seriously, or he was drawing a distinction between how he would be expected to respond in a locker room and a formal report.

.@Jim_Jordan: “I never saw, never heard of, never was told about any type of abuse. If I had been, I would have dealt with it.” #SpecialReport https://t.co/xJF1G8EIDr pic.twitter.com/kpzOtnjO4U

Jordan, a powerful House conservative, has influential defenders in his corner, including House Freedom Caucus chair Mark Meadows (R-NC) and President Donald Trump. They’re rallying around him as he considers making a run to replace retiring Speaker of the House Paul Ryan (R-WI). “Jim Jordan is one of the most outstanding people I’ve met since I’ve been in Washington,” Trump said. “I believe him 100 percent. No question in my mind. I believe Jim Jordan 100 percent. He’s an outstanding man.”

But the Ohio Republican is under increasing pressure as more details emerge about the alleged sexual misconduct at Ohio State, including a report in Politico where one former wrestling coach referred to the men’s facility used by the team “cesspool of deviancy.”

What happened at Ohio State?

Multiple men have come forward with allegations of sexual misconduct against Richard Strauss, a doctor at Ohio State University, dating back to the late 1970s.

One wrestler suggested that Strauss, who killed himself in 2005, could have molested as many as 2,000 athletes during his 20-year tenure — a horrifying legacy reminiscent of Larry Nassar at Michigan State.

But some people close to the wrestling team during Jordan’s tenure told Politico that the sexual misconduct went even further than Strauss’s alleged crimes:

“Coaching my athletes in Larkins Hall was one of the most difficult things I ever did,” a former wrestling coach who worked with Jordan told Politico. “It was a cesspool of deviancy. And that’s a whole ’nother story that no one has addressed.”

One unnamed wrestler also said that he witnessed Jordan yelling at a gawker to get out of the sauna, though Jordan’s office denied that account.

What did Jordan know?

Jordan has denied having any knowledge of Strauss’ alleged abuse and has accused those who say otherwise of carrying a vendetta against him. But the athletes who have come forward say he definitely knew what was going on.

Dunyasha Yetts, a wrestler at Ohio State in 1993, told Politico that he told Jordan about Strauss’ behavior and asked him and Russ Hellickson, the former wrestling head coach, to come to the doctor with him because he didn’t want to be fondled. “For him to say he didn’t know? I asked him to come in there with me!” Yetts said. Jordan’s office denied the account, and Hellickson said he didn’t remember it.

Shawn Dailey, another former wrestler, told NBC News he was groped a half a dozen times by Strauss but didn’t tell Jordan about it at the time because he was too embarrassed. But he said Jordan was present for conversations about Strauss and that it was “very common knowledge in the locker room that if you went to Dr. Strauss for anything, you would have to pull your pants down.”

Dailey, who calls Jordan a “close friend” and donated to his first political campaign in 1994, also corroborated Yetts’ account that he had asked Jordan to step in:

“Dunyasha comes back and tells Jimmy, ‘Seriously, why do I have to pull down my pants for a thumb injury?’” Dailey recalled. “Jimmy said something to the extent of, ‘If he tried that with me, I would kill him.’”

Former UFC world champion Mark Coleman told the Wall Street Journal that Jordan knew. “There’s no way, unless he’s got dementia or something, that he’s got no recollection of what was going on at Ohio State,” said Coleman, who wrestled at Ohio State and won the NCAA championship 1988. “I have nothing but respect for this man, I love this man, but he knew as far as I’m concerned.”

Jordan has denied any knowledge, and his allies have circled the wagons to defend him. Rep. Matt Gaetz (R-FL) shared an article from the Daily Caller that questioned the credibility of the wrestlers cited in the NBC report, by reporting on lawsuits the athletes had filed and been named in, as well as criminal fraud conviction. It also contains a statement from Hellickson, the former head coach. “At no time while Jim Jordan was a coach with me at Ohio State did either of us ignore abuse of our wrestlers,” Hellickson wrote.

Jordan told Fox News that DiSabato, whose decision to go public with his allegations against Strauss prompted the university’s investigation, has a “vendetta against Ohio State” and has a “criminal record” and “all kinds of lawsuits against him.” As Politico points out, DiSabato has has long-running business feuds with Ohio State and has had “run-ins” with Jordan’s family. He’s also one of multiple witnesses to have come forward with allegations about Strauss.

Ohio State is investigating the allegations against Strauss

Ohio State began investigating Strauss earlier this year after DiSabato reported the allegations to the University.

Strauss, who was the university’s team doctor from 1981 to 1995, after joining Ohio State’s staff in 1978, was said to have been in contact with athletes in baseball, cheerleading, cross country, fencing, football, gymnastics, ice hockey, lacrosse, soccer, swimming, tennis, track, volleyball, and wrestling, during his time.

The university has said it has received testimony of sexual abuse and misconduct from male students from 14 different sports teams, and some students who were patients through the university’s health services unit. Investigators have asked 150 people questions about the allegations, from students to witnesses, and the university has also referred the matter to law enforcement for any criminal prosecution.

Ohio State has yet to make any details of the investigation public, but DiSabato told NBC, “based on testimony from victim athletes from each of the aforementioned varsity sports, we estimate that Strauss sexually assaulted and/or raped a minimum of 1,500 – 2,000 athletes at OSU from 1978 through 1998.”

Ohio State announced in April it was investigating allegations about Strauss. Jordan is in contact with lawyers probing the matter.

What does this mean for Jordan’s political career?

The Ohio State allegations have suddenly thrown Jordan’s political career into jeopardy. One of the founders of the House Freedom Caucus, Jordan is a conservative star, and he had been floated as a possible replacement for House Speaker Paul Ryan, who is retiring at the end of this term. He’s also been one of the House’s most vocal FBI and Justice Department skeptics, echoing President Donald Trump in calling the Russia investigation a “witch hunt.”

Jordan has insinuated that the allegations from the former wrestlers are curiously timed — “right after the big hearing with Mr. Rosenstein, right when there’s all this talk about the speaker’s race.” In June, Jordan and Deputy Attorney General Rod Rosenstein had a tense back-and-forth at a Congressional hearing.

Whether these questions about what Jordan knew will dim that political star — or snuff it all together — is still unclear.

Democrats pushed out out Sen. Al Franken (D-MN) last year when he faced misconduct allegations of his own. There’s still some debate on the left about whether that was the right thing to do, but in the #MeToo era, Democrats, at least in that case, decided Franken couldn’t be kept around. Thus far, Jordan’s allies have come to his defense. Speaker Ryan’s office has called the allegations “serious” but hasn’t indicated whether he’ll take any further action.

Neither party has established a standard for what should happen to those within their ranks accused of sexual misconduct or being complicit in it. With Jordan, Republicans face a new test. He says he didn’t know anything about it, but many of those around him at the time say there’s no way he didn’t.