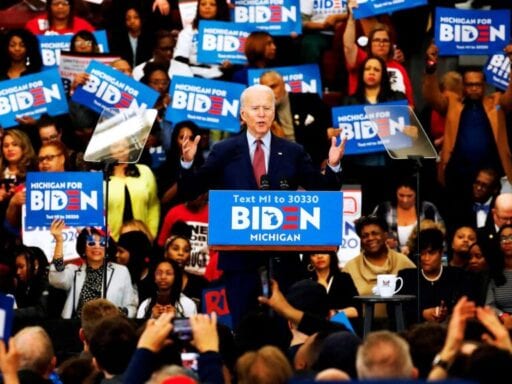 He now has a delegate lead that will be near-impossible for Bernie Sanders to overcome.

Joe Biden’s victories in Tuesday’s primaries delivered him a delegate lead that will be near-impossible for Bernie Sanders to overcome.

The delegate totals are still being finalized, but it’s already clear that Biden handily won all three states that went ahead with elections: Florida, Illinois, and Arizona. Going into Tuesday’s contests, Sanders needed to dramatically improve his standing and outperform the polls to have a hope of catching up to Biden. He failed to do either, and now, he has essentially run out of time.

Even though there are primaries or caucuses scheduled into June, most of the delegates — 58 percent — have already been allotted, due to the frontloaded calendar. Only 42 percent of delegates remain in future contests.

Furthermore, though Biden is still a ways off from outright clinching a pledged delegate majority — he needs 1,991 to do that, and will probably end up with around 1,200 once delegate totals are finalized — Democrats’ proportional allocation rules will make it incredibly difficult for him to lose his lead.

For Sanders to pass Biden in pledged delegates now, he’ll have to win future primaries by something like 30 percentage points on average. But Sanders hasn’t won even a single state by anywhere near that much so far, except for his home state of Vermont. Unless there’s a stunning and catastrophic collapse in Biden’s support, this simply isn’t going to happen.

Sanders’s chances for a comeback were already very unrealistic before Tuesday’s results — but now that most of those results are in, the comeback scenario has progressed to the realm of “wildly implausible.”

Biden has basically won the nomination at this point. The question now is whether Sanders chooses to acknowledge this by dropping out — or whether he decides to stay in for several more weeks or months, with the coronavirus outbreak adding uncertainty about the timetable of how exactly this ends.

The Democratic race has seen a remarkable turnabout since the end of February, when many not only viewed Bernie Sanders as the Democratic frontrunner, but also thought he could essentially lock up the nomination on Super Tuesday.

But that all fell apart with Biden’s South Carolina victory, which elevated the former vice president back up to a top-tier contender, spurred several of his rivals to drop out, and was interpreted by many Democratic voters across the country as a signal that Biden was the main alternative to Sanders.

This positive developments for Biden came, it turned out, at exactly the right time — just as nearly 60 percent of the total delegates in the total Democratic contest were about to be allotted, on Super Tuesday and the two weeks following it.

So Biden ended up winning the most states in this period. Even more importantly, he won several of those states in landslides — most notably in the South, where he picked up at least 30 delegates more than Sanders in each of Alabama, Virginia, North Carolina, and Mississippi. The former vice president also netted 15 delegates over Sanders in Missouri and Michigan.

In contrast, the only March state where Sanders won a large delegate advantage was California — and his edge there was easily swamped by all the big wins Biden put together.

From Super Tuesday (March 3) to March 10, then, Biden built up a delegate lead of over 150 over Sanders — a formidable lead, but not an insurmountable one. These new results, however, will push that lead into something that could be fairly characterized as insurmountable (unless some truly extraordinary event were to occur).

In Florida alone, Biden will net around 100 delegates, and Illinois and Arizona will pad that lead further. Essentially, at a moment when Sanders badly needed to catch up, Biden instead doubled the size of his advantage.

The big question is how long Sanders will stay in

Still, when the dust settles from Tuesday’s contests, Biden will still be a long way off from technically clinching the nomination by winning 1,991 pledged delegates (he’ll probably end up with around 1,200).

The Democratic proportional delegate allocation rules make it near-impossible for Sanders to catch up to Biden at this point — but they also make it impossible for any candidate to clinch the nomination this early in the contest, unless that candidate faces no significant opposition.

Democrats could therefore be facing an uncomfortable situation akin to the one they faced with Bernie Sanders in 2016, when the Vermont senator continued his campaign against Hillary Clinton until June despite having no plausible path to victory. Indeed, it was clear around this same point in the 2016 cycle — mid-March — that Sanders was almost surely too far behind to win.

Sanders stayed in so long in 2016 largely in an attempt to win more delegates and gain more leverage in discussions over the Democratic platform. But he’s faced criticism from Democrats, who argue that he hurt Hillary Clinton’s chances by staying in for so long, by dividing the party and preventing Clinton from changing her focus to the general election.

Sanders’s supporters tend to reject this critique, saying that a vigorous primary can actually be helpful at preparing a candidate for the general election. But the issue is clearly on Sanders’s mind. Last Wednesday, Sanders began and ended his post-mortem of his disappointing results on the previous night by stressing that President Trump must be defeated, and that he will do everything in his power to make that happen.

Now, though, with Sunday’s debate having failed to shake up the larger dynamics of the nomination contest, Sanders clearly lacking any remotely plausible path to victory, and the coronavirus pandemic only worsening, the Vermont senator will have to reevaluate whether continuing the primary weeks or months longer will best serve his goals.

Lululemon’s ex-CEO wrote an “unauthorized” history of the brand
A majority of House Republicans voted to reject results from Arizona and Pennsylvania
The 10th Amendment, explained for Trump
How a climate bill becomes a reality
Alan Dershowitz’s latest defense of Trump would let presidents get away with almost anything
California’s wildfires are hardly “natural” — humans made them worse at every step