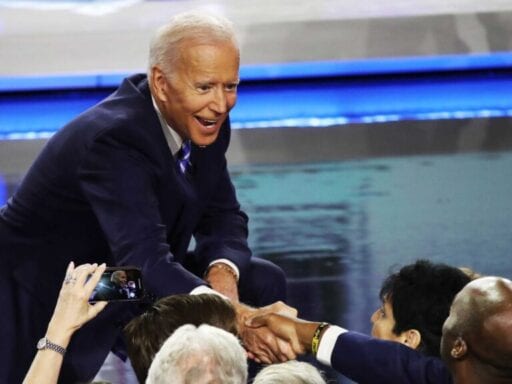 Joe Biden greets members of the audience at the Democratic debate in Miami, Florida, on June 27, 2019. | Drew Angerer/Getty Images

A big, albeit expected, victory in the Sunshine State.

Former Vice President Joe Biden has won Florida’s Democratic primary, in the exact opposite of a political surprise.

Even before Biden jumped out to what appears to be a dominating national polling lead over Sen. Bernie Sanders, the state looked set to be one of the friendliest contests for him.

Florida has a higher-than-average African American population, which has tended to be the death knell for Sanders across both the 2016 and 2020 cycles. For example, in this year’s Mississippi primary, where black voters made up about 70 percent of the electorate, Biden won 81 percent of the vote.

And Sanders faced additional demographic challenges in the state: Florida also has a large Cuban American population that is deeply skeptical of Sanders’s perceived softness on the Latin American left and a large Jewish population, some of whom may be skeptical of his views on Israel. Sanders himself is Jewish, but that has brought him essentially no benefit of the doubt from Israel hawks.

The icing on the cake is that Florida has one of the oldest populations of any state, and Sanders famously does poorly with older voters — on Super Tuesday, for instance, nearly half of all voters older than 65 voted for Biden; only 15 percent of those voters went for Sanders.

In short, Florida was a promising state for Biden, and it voted at a time when he’s moving up in national polls. Recent surveys had him up by anywhere from 29 to 44 percentage points depending on which pollster you asked, so the real question has been about exactly how enormous his delegate haul would be.

Florida’s 219 pledged delegates make it the fourth-largest prize in the Democratic primary calendar (New York has a smaller population but more delegates because bluer states get extra weight in the process). A big win here is a huge opportunity for Biden to extend his delegate lead and to try to put Sanders out of contention.