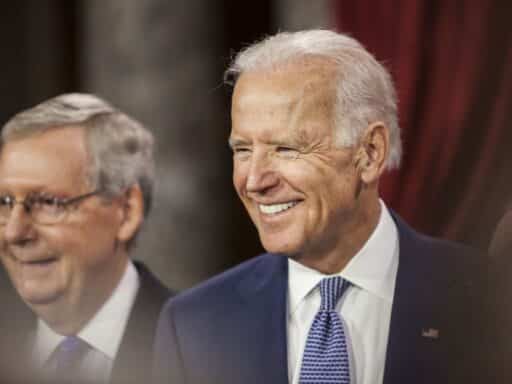 Biden wants bipartisanship and a bold stimulus bill. He might not be able to get both.

President Joe Biden wants to work with congressional Republicans. He also wants to pass a $1.9 trillion Covid-19 relief package. He might have to choose between the two.

Senate Republicans have made clear they don’t support the proposal Biden rolled out last week, which included $1,400 stimulus checks to people making less than $75,000 annually (or a couple earning less than $150,000 annually), $400-per-week supplemental unemployment insurance through September, hundreds of millions for sped-up vaccine deployment and to reopen schools, and a $15 minimum wage.

Republicans are open to a more targeted (read: smaller) relief bill. They are eager to funnel money toward Covid-19 vaccine distribution and there is some support for a more targeted version of stimulus checks, but that’s about as far as they’ll go. Many also say they want to ensure the $900 billion Covid-19 relief package Congress already passed in December is spent before they appropriate more money.

“The size of the package is a big question,” moderate Republican Sen. Susan Collins (ME) recently told reporters. She said the “package should focus solely on the persistent pandemic. It should not be used as a vehicle for a wish list that certain Democrats have,” an overt reference to the minimum wage hike.

Collins represents a handful of GOP senators who might be more likely to strike a deal with Biden’s administration. She’s part of a bipartisan group of senators with a direct line of communication to the White House. Their ranks have grown, but the group still includes just eight Republicans — two shy of the number needed to advance any bill past the Senate filibuster. And the early skepticism of even moderate Republicans is making Democrats urge Biden not to take too long before considering other options to pass Covid-19 relief.

The White House has insisted that hammering out a bipartisan deal is its first priority, and Biden’s senior staff are busy reaching out to lawmakers. But behind the scenes, House and Senate Democrats are preparing budget reconciliation bills to pass Covid-19 relief — a sign they’re not willing to wait too long before moving ahead without Republicans.

“Tell me the Republicans we have on board right now,” said an incredulous Vermont Sen. Bernie Sanders, who now chairs the Senate Budget Committee and has purview over reconciliation. “I’ve not heard one Republican.”

The clock is ticking for Biden to strike a bipartisan deal, and some Democrats are already growing impatient. Schumer said the Senate would move ahead with a Covid-19 relief bill “as soon as next week.”

The bulk of White House talks on Biden’s Covid-19 relief bill have rested with a bipartisan group of senators.

“I prefer these things to be bipartisan because I’m trying to generate some consensus and take sort of the, how can I say it, the vitriol out of all of this,” Biden recently told reporters.

Senators told Vox the group has the potential to grow further, but it still does not have the 10 Republican votes needed to skirt past the filibuster. Even if they did have the numbers, sources familiar with the coalition told Vox the group is meant to be more informal and spur discussions among senators, rather than whipping votes.

Biden White House officials have been doing a lot of outreach to lawmakers in both parties. Senior officials including National Economic Council director Brian Deese and White House Covid czar Jeff Zients held a Sunday call with the bipartisan Senate group to go over their plan before following up again this week.

“It was quite a useful and productive opportunity to provide that further justification” for Biden’s plan, one White House official said, adding the Sunday phone call was “one of literally dozens of conversations that senior administration officials have had with members of Congress from both parties over the last week.”

Some of the senators on the Sunday call told White House officials they wanted to see changes like targeting stimulus checks to needier families, and stripping some more progressive provisions like a $15 minimum wage from the final bill text. Biden seems open to negotiate, saying he sees the current income thresholds dictating who is eligible for proposed $1,400 stimulus payments as a moving target.

“I give the administration a lot of credit for listening, and I think even today we’ve heard the president say that maybe we can look at targeting the economic impact payments a little bit,” Sen. Maggie Hassan (D-NH) told Vox. “I know the president believes in bipartisanship, but we have an urgent need here. We need to make sure we express our concerns, fine-tune this as best we can, but … we need to come together quickly and make some good compromises.”

In the coming weeks, it’s largely a question of how much Biden’s White House is willing to give. Just targeting stimulus checks isn’t the only thing Republicans want to see the White House give on. Indeed, the Senate GOP thinks large chunks of Biden’s plan aren’t necessary.

“I’m sure they’d be very happy to work with us if we agreed with everything they proposed,” Sen. Mitt Romney (R-UT) told Vox. “How willing they are to work with us if we have ideas about taking this apart and having perhaps two pieces of legislation, or perhaps adjusting certain elements, that’s something they would have to respond to.”

So far, the White House has unequivocally pushed back on the idea of splitting Biden’s plan into two separate bills.

“We are not looking to split the package, that is not a proposal from the White House,” White House press secretary Jen Psaki said. Psaki added that Biden believes his $1.9 trillion package is already appropriately targeted to people who need it most, but “he’s happy to have a conversation about any component.”

Still, Biden’s White House might have to bring down their plan’s price tag for Republicans — and even some moderate Democrats — to support it.

“We ought to try to do what we can do in a bipartisan way. Let’s do that first — show them that we can start out the new Congress bipartisan,” Manchin told reporters recently, adding, “And what we don’t agree on in a bipartisan way, then Senator Schumer and the leadership and the Democrat Party has other means to move things along, and I think it’s appropriate.”

Manchin is talking about budget reconciliation, which is the mechanism that allows Democrats to attach big items to budget bills — which they can pass with 51 votes.

“We can get a lot of the Covid bill done with reconciliation,” Schumer recently told MSNBC’s Rachel Maddow. “And that’s something we certainly will use if they try to block this immediate Covid bill.”

While Republicans in the bipartisan group are the ones advocating for cutting back on Biden’s Covid-19 bill, Democratic senators in the centrist group haven’t been as eager to scale back. Democrats remember that Senate Republicans used the budget reconciliation mechanism to pass their massive tax cut bill in 2017, and some in the Democratic caucus think they should give their priorities the same treatment now that they hold the majority.

Sanders, the Senate Budget Committee chair, and House Budget Committee Chair John Yarmuth have each told reporters their committees are working on drafting budget reconciliation resolutions for the Covid-19 relief bill, which could pass in a matter of days if Schumer and House Speaker Nancy Pelosi give them the green light.

“I hope my Republican colleagues come on board,” Sanders told reporters on Wednesday. “But if not, we’re going forward.”