Senate Republicans are doing what they do best: supporting Trump 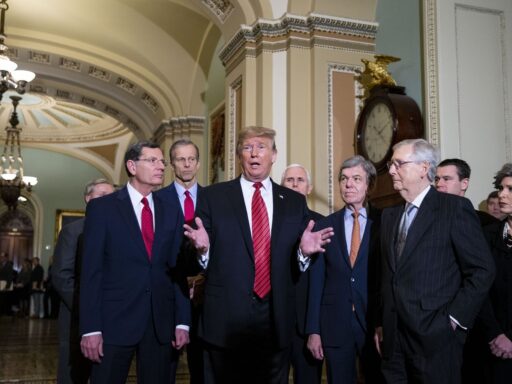 Many Republicans are poised to stand by Trump during the impeachment trial — much as they have for years.

Many Senate Republicans say they haven’t yet decided where they stand on Donald Trump’s conviction in an impeachment trial. But if past is at all precedent — and a recent vote seems to suggest it is — a majority are likely inclined to let him off the hook.

In a vote on the constitutionality of the trial on Tuesday, just five of the 50-member Republican conference sided with Democrats in favor of moving forward, an indication that the other 45 members were questioning the validity of the proceedings or using that argument as a way to get out of what will probably be a politically challenging situation. The vote was largely viewed as a sign that the majority of Republicans weren’t open to convicting the former president, though several lawmakers emphasized that they still planned to weigh the evidence.

“The trial hasn’t started yet. And I intend to participate in that and listen to the evidence,” Minority Leader Mitch McConnell recently told reporters. “I’ll listen to the evidence and seek out as much as possible what the truth is and that will determine how I vote,” said Sen. Bill Cassidy (R-LA) in an interview with the Advocate. And though it’s unlikely, it’s possible more lawmakers will decide to convict based on what they hear.

A statement like that from McConnell — who notably said during Trump’s first impeachment trial that he wasn’t an “impartial juror” — isn’t insignificant. But there hasn’t been a sweeping change in the Senate GOP’s stance, at least publicly.

Meanwhile, there are other indicators that signal how most Republicans could vote, namely, their past support of Trump through everything from his disastrous handling of the current pandemic to his lies about the 2020 election results. (Most Senate lawmakers did not contest the certification of the results, but they were silent for weeks after Biden’s victory had already been declared.) While a few members have occasionally spoken out or pushed back on Trump, most Senate Republicans have for years enabled or defended the president’s behavior.

On the impeachment trial — much like on myriad issues in the past — many could well do the same.

There are a couple reasons Republicans have given to explain their stances on impeachment so far. Among those who’ve pushed back on the effort, some have raised questions about the constitutionality of the trial itself since Trump is no longer president, while others argue that moving forward with the process is bad for the country’s unity.

As Vox’s Ian Millhiser has explained, the majority of legal scholars believe the trial is constitutional, though the precedent for it is hazy: In 1876, the majority of the Senate opted to move forward with a trial for Secretary of War William Belknap even though he’d already resigned — but he was not convicted, and many who declined to do so cited questions about constitutionality.

Since Trump is now out of office, some lawmakers have also wondered about the purpose of the impeachment trial because it’s historically been used as a way to remove people from power. Democrats, meanwhile, have emphasized that the push for impeachment is about making sure the president is held accountable for his role in inciting the insurrection that took place on January 6, during which five people died. They’ve noted, too, that they would pursue a vote to bar him from federal office if he was convicted by the necessary 67 members of the Senate.

Republicans, however, have framed the proceedings as a slippery slope to using impeachment for “political revenge against a private citizen” and questioned whether barring Trump from federal office would be undemocratic.

“Congress would be opening itself to a dangerous standard of using impeachment as a tool for political revenge against a private citizen, and the only remedy at this point is to strip the convicted of their ability to run for future office — a move that would undoubtedly strip millions of voters of their ability to choose a candidate in the next election,” Sen. Joni Ernst (R-IA) said in a statement.

An emphasis on how this trial could harm the country’s unity has also been brought up again and again — even though Trump and Republican lawmakers are the ones who previously exacerbated partisan divides — most recently with unfounded claims about election fraud that prompted many GOP voters to question the election outcome.

“Moving forward with impeachment at this juncture will only further divide our already hurting nation,” said Sen. Cynthia Lummis (R-WY), one of the 147 Republican lawmakers who voted to challenge the election results.

Republicans’ past behavior foreshadows how they could vote

Many Republicans’ willingness to stand by Trump these last four years is indicative of how they will likely vote in the trial: Already, 45 Republicans have effectively said they think the trial is unconstitutional, a sign that the majority of the conference is likely leaning toward acquittal.

And Republicans’ prior support of Trump underscores this dynamic: When Trump called for foreign governments to investigate Joe Biden, a handful of Republicans spoke out against it while most of the conference did not directly oppose it. During the Black Lives Matter protests this past summer, peaceful protesters were tear-gassed to clear a path for a Trump photo opportunity, which garnered little backlash from Republican lawmakers. Trump has also faced more than 20 allegations of sexual misconduct, which has not prompted notable blowback from his party, either. Since the start of the pandemic, Trump has dismissed its severity and used xenophobic terms to describe it — both issues few Republicans confronted. Most recently, although the majority of Senate Republicans voted to certify the election results, many waited weeks before acknowledging Biden’s victory last winter.

Senate Republicans’ unwillingness to grapple with Trump’s incendiary comments and stances became so commonplace that many developed a standard response when asked about his remarks or legislative positions: They often said they hadn’t seen them. It’s an approach that Republicans initially used when they were asked about people chanting “send her back” regarding Rep. Ilhan Omar (D-MN), a congresswoman of color, following a Trump rant about her. And it’s an approach they used when confronted with comments Trump previously made to journalist Bob Woodward, acknowledging that he understood how serious the coronavirus was even as he downplayed it to the public.

In some instances, Republicans have even avoided television interviews about Trump’s actions, including in recent weeks as the focus has been on his role in inciting the violence at the Capitol. “One of the hallmarks of the Trump era that anyone who works for a mainstream Sunday show knows all too well has been the selective silence of a large chunk of the elected leaders of the Republican Party, particularly in the United States Senate,” Meet the Press anchor Chuck Todd wrote in Politico Playbook in mid-January. “This week is no different from just about every other Sunday of the Trump era: a large swath of mainstream GOPers choosing silence over being forced to reconcile their role and the party’s role in the Trump era.”

In the previous impeachment trial, just one Republican senator, Mitt Romney, voted to convict, and only two — Romney and Sen. Susan Collins (R-ME) — voted to have witnesses testify. Romney remains the only senator in history to convict a president of the same party, so it is worth noting that party allegiances have heavily influenced these votes in the past as well.

There had been some speculation about whether Republicans’ approach toward Trump would shift following the attack on the Capitol and the former president leaving office, but it appears as though it’s not changing much. Although there were signs of Senate Republicans distancing themselves from Trump recently, including most of the conference voting to certify the election results and stonewalling his demands for $2,000 stimulus checks, a concern about upsetting the GOP base is likely to be a major factor in the impeachment trial.

“One of the biggest threats Republicans do face, especially if they come from red states, is the threat of a primary challenge if they’re seen as insufficiently pro-Trump,” Cook Political Report’s Jessica Taylor previously told Vox.

Sen. Pat Toomey (R-PA), a retiring senator, received strong blowback from Pennsylvania Republicans after he called for Trump to resign following the Capitol attack. And others, like Sen. John Thune (R-SD), have been the direct target of the former president’s ire after backing the certification of the election results.

“We are seeing the fear of Trump or of Trumpism continuing to permeate the behavior of these senators,” Republican strategist and Lincoln Project adviser Chip Felkel said.

Assuming Republicans predominately support Trump in the impeachment trial, as they appear on track to do, it’s clear that many members of the party still aren’t able to break with him even though he’s no longer in office.

My family founded Barneys. Now the great department store is closing.
Photos: Trump supporters storm the US Capitol
Algeria’s forgotten protesters
Study: Nearly a third of Americans believe a conspiracy theory about the origins of the coronavirus
4 winners and 6 losers from Game of Thrones’ disappointing “The Last of the Starks”
“I’m deeply ashamed”: Another Facebook employee resigned in protest over the company’s handling of T...