John Brennan: Trump revoked my clearance to scare others “into silence” 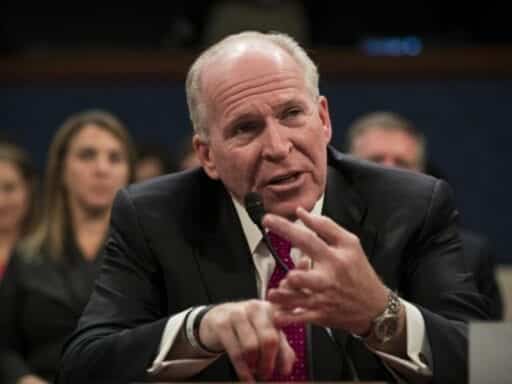 The former CIA director fired back at the president in a fiery op-ed.

Less than 24 hours after President Donald Trump’s revoked the security clearance of former CIA director John Brennan for his “wild outbursts on the internet and television,” Brennan has fired back — rebuking Trump from the pages of the New York Times.

In a fiery op-ed Thursday, Brennan called Trump’s decision to revoke his security clearance “politically motivated” and an attempt to “scare others who might challenge him.”

But Brennan made that point in the last paragraph of his op-ed.

He spent most of his column explaining why he thinks Trump is so desperate to quiet his critics: because, as Brennan wrote, “Mr. Trump’s claims of no collusion are, in a word, hogwash.” Brennan continued:

The only questions that remain are whether the collusion that took place constituted criminally liable conspiracy, whether obstruction of justice occurred to cover up any collusion or conspiracy, and how many members of “Trump Incorporated” attempted to defraud the government by laundering and concealing the movement of money into their pockets. A jury is about to deliberate bank and tax fraud charges against one of those people, Paul Manafort, Mr. Trump’s former campaign chairman. And the campaign’s former deputy chairman, Rick Gates, has pleaded guilty to financial fraud and lying to investigators.

Brennan, who led the CIA for most of Barack Obama’s second term, said that just like Russian government denials that they did not interfere in the 2016 US election are “hogwash,” Trump’s claims that he and his associates didn’t collude with Russia aren’t credible.

Brennan pointed to Trump’s own words and actions, including his call, as a presidential candidate, to the Russians to find Hillary Clinton’s “30,000 emails that are missing” in July 2016:

By issuing such a statement, Mr. Trump was not only encouraging a foreign nation to collect intelligence against a United States citizen, but also openly authorizing his followers to work with our primary global adversary against his political opponent.

Such a public clarion call certainly makes one wonder what Mr. Trump privately encouraged his advisers to do — and what they actually did — to win the election. While I had deep insight into Russian activities during the 2016 election, I now am aware — thanks to the reporting of an open and free press — of many more of the highly suspicious dalliances of some American citizens with people affiliated with the Russian intelligence services.

Brennan echoed a statement he’s made before, that those who are on a “treasonous path” often don’t realize until it’s too late. He cited Russia’s efforts to cultivate relationships with people within the US. “They troll political, business and cultural waters in search of gullible or unprincipled individuals who become pliant in the hands of their Russian puppet masters,” he wrote. “Too often, those puppets are found.”

To be clear, Brennan doesn’t provide any new evidence of collusion between Trump or his associates and Russia — this isn’t some big reveal of classified information from a former intelligence official who is finally speaking out. This is merely Brennan looking at the publicly available facts and coming to his own conclusions — the same conclusions he’s made over and over publicly before.

The only evidence he actually provides of possible collusion by Trump himself is just that statement from the campaign trail about Russia hacking Hillary’s emails. Brennan insinuates a lot, but his case for collusion by Trump isn’t anything we haven’t already heard before.

Brennan’s conclusion is simple, and sure to incense Trump even further: let special counsel Robert Mueller do his job “without interference — from Mr. Trump or anyone else — so that all Americans can get the answers they so rightly deserve.”

Brennan’s op-ed homes in on both on the chilling precedent Trump is setting by retaliating against critics, and perhaps part of the president’s motivation: to distract from and discredit Mueller’s Russia investigation.

Besides Brennan, the White House is considering revoking clearances from a slew of other former top law enforcement and intelligence officials, or preventing those who’ve already lost them from obtaining them in the future. Many of those people feature prominently in the Russia investigation — from former FBI Director James Comey and former FBI Deputy Director Andrew McCabe to former FBI agent Peter Strzok.

Trump, of course, is not backing down. He attacked Brennan on Twitter Wednesday evening, apparently pulling choice quotes from his defenders on the nightly line up of Fox News to make his case:

“John Brennan is a stain on the Country, we deserve better than this.” Former Secret Service Agent and author of new book, “Spygate, the Attempted Sabotage of Donald J. Trump,” Dan Bongino. Thank you Dan, and good luck with the book!

“I’d strip the whole bunch of them. They’re all corrupt. They’ve all abused their power. They’ve all betrayed the American people with a political agenda. They tried to steal and influence an election in the United States.” @seanhannity

But Trump’s retaliation against Brennan has only amplified his criticism, from Brennan’s op-ed to comments the former CIA director made Wednesday on Twitter and on television.

“I’ve seen this type of behavior and actions on the part of foreign tyrants and despots and autocrats for many, many years,” Brennan said Wednesday, calling into MSNBC. “I never thought I’d see it in the United States.”

The election result the stock market is really afraid of
Jack Dorsey is giving millions to Colin Kaepernick’s criminal justice group
LaCroix sparkling water CEO accused of “unwanted touching” by 2 male pilots
What a 1963 RFK-James Baldwin meeting teaches us about race in Trump’s America
How to have a true hobby, not a side hustle
The chaotic Trump-Kim summit aftermath, explained