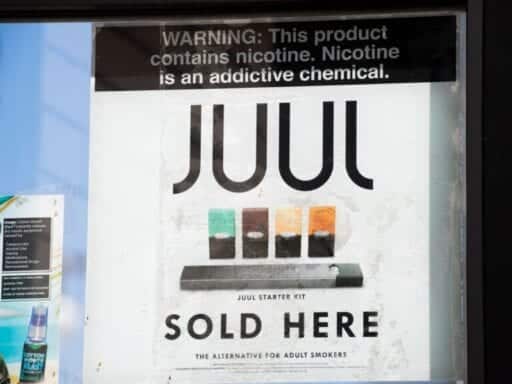 Share
Loading...
Juul’s CEO will be replaced by an executive from Altria. When Altria purchased a 35 percent stake in Juul last December, it put Juul’s value at a staggering $38 billion. | Photo credit should read ROBYN BECK/AFP/Getty Images

The e-cigarette company is also suspending advertising and lobbying against a proposed ban on flavored products.

Kevin Burns, CEO of Juul Labs — maker of the biggest selling e-cigarette on the US market — has stepped down. He will be replaced by K.C. Croswaite, a former executive at Altria, one of the world’s largest tobacco producers.

News of the shakeup, first reported in the New York Times, appeared on Juul’s website Wednesday. According to Juul, Crosthwaite will replace Burns effective immediately.

Altria purchased a 35 percent stake in Juul in December, which put the company’s value at a staggering $38 billion. The move raised eyebrows, since the e-cigarette company’s purported goal was making cigarette smoking obsolete.

Separately, Philip Morris announced an end to its discussions about a merger with Altria, and said the companies would instead focus on jointly bringing the ”heat-not-burn” tobacco device IQOS to the US.

Juul, which sells nicotine vape products with flavors like mango and mint, also announced Wednesday it will suspend all broadcast, print, and digital product advertising in the US, and refrain from lobbying against the Food and Drug Administration’s proposed ban on e-cigarette flavors.

These moves come amid an epidemic of mysterious vaping-related respiratory illness, which has killed seven people, as well as recent data showing record levels of e-cigarette use in adolescents.

Juul has been under scrutiny amid rising rates of teen vaping

Juul’s rise as the dominant seller of e-cigarettes coincided with an explosion in youth vaping. The best data on health trends in America shows it’s not adult smokers who are primarily using e-cigarettes. According to new survey data on adolescent substance use, published recently in the New England Journal of Medicine, one in four 12th graders reported using nicotine e-cigarettes in the past 30 days. Among 10th graders, that rate is one in five, and among 8th graders, it’s one in 11.

Even greater numbers of kids reported vaping in the past year. These figures, from the National Institutes of Health Monitoring the Future survey, represent “significant increases” in each of the three grade levels tracked between 2018 to 2019, the researchers wrote.

Meanwhile, another newly published study, in JAMA, shows e-cigarette use is staying stable or even declining in adults. Just 2 percent of adults ages 45 to 64 reported using e-cigarettes in 2018, according to the study. The number is even lower — 1 percent — for adults 65 and older.

Just ahead of the shakeup, Juul was scolded by federal regulators for marketing to kids. On September 9, the FDA sent a warning letter, saying the company violated federal regulations by marketing Juul products as safer than smoking — including to schoolchildren — ahead of receiving FDA approval to make those claims.

The letter reflected the growing concerns among health experts about the potential health consequences of more kids getting hooked on highly addictive nicotine vaping products, and the company’s role in that epidemic. Earlier this year, independent research out of Stanford analyzed Juul’s early marketing campaigns, between Juul’s launch in 2015 and fall 2018. The reseachers looked at thousands of Instagram posts, emails, and ads, and came to this conclusion: Juul’s marketing “was patently youth-oriented.”

In another sign that the US government was taking youth vaping more seriously, on September 11, the Trump administration announced that it was planning to ban flavored e-cigarettes in the coming months. Flavors Since Juul’s products are marketed for their flavors, that would make selling in the US difficult for the company.

It’s not just the feds cracking down. On Tuesday, Massachusetts’ governor announced a four-month ban on e-cigarette products in the state, also declaring a public health emergency over the vaping-related respiratory epidemic, which has so far sickened at least 530 people across the country.

Michigan had already approved a ban on e-cigarette flavors, while New York enacted a similar ban. There’s ample evidence that flavors are among the top draws to vaping for adolescents.

Still, Juul reaffirmed the company’s commitment to helping smokers quit. In the press release, Crosthwaite said: “I have long believed in a future where adult smokers overwhelmingly choose alternative products like Juul. That has been this company’s mission since it was founded, and it has taken great strides in that direction. Unfortunately, today that future is at risk due to unacceptable levels of youth usage and eroding public confidence in our industry.”

The known and unknown health risks of e-cigarettes

The vaping-related respiratory illness epidemic is a reminder that e-cigarette use isn’t risk-free.

Juul delivers mega doses of nicotine — a highly addictive substance that targets the brain’s reward circuitry, potentially making young people more prone to substance-use disorders later. Nicotine in e-cigarettes has also been linked with a heightened risk of seizures, according to FDA.

Each Juul pod contains 59 milligrams of nicotine per milliliter of liquid. Juul claims that’s is equal to a pack of cigarettes in terms of nicotine, but tobacco experts told me the precise equivalency is difficult to determine and may be even higher. Juul also contains three times the nicotine levels permitted in the European Union, which is why it can’t be sold there.

In the short-term, e-cigarettes have also been linked with lung irritation and injury (when the devices go haywire and explode). Longer-term health risks doctors are watching include e-cigarette’s potential cardiovascular effects, and whether they increase the risk of heart attacks, high blood pressure, chronic obstructive pulmonary disease, and coronary artery disease.

Vox Sentences: Robert Mueller and the 12 Russian trolls
What Amy Coney Barrett’s confirmation will mean for environmental law and Joe Biden’s climate plan
The rescue of the 12 Thai boys who were trapped in a cave, explained
The Tennessee GOP primaries will be determined by one question: Who loves Trump the most?
The pandemic should permanently change how we tip
Why restoring nature is so important to limiting climate change