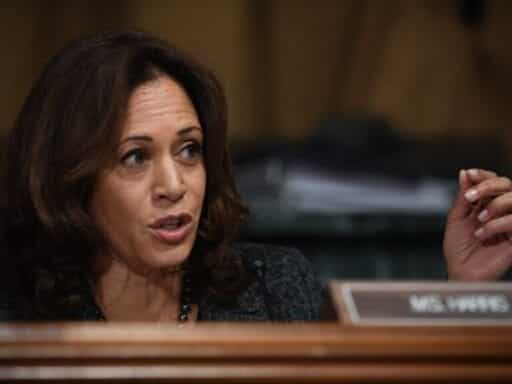 Kavanaugh has been using his women friends as part of his defense as he faces multiple allegations of sexual misconduct.

Supreme Court nominee Brett Kavanaugh has long bragged about the many women friends he has and the female clerks he’s worked to promote. It’s a credential he’s cited over and over again in response to multiple allegations of sexual misconduct, in an attempt to frame himself as a champion of women. It’s also a strategy Sen. Kamala Harris (D-CA) called into question on Thursday during his hearing in front of the Senate Judiciary Committee.

Harris, a longtime California prosecutor, urged Kavanaugh to explain whether it would be possible for a man to have positive relationships with certain women while still harming others — two actions that clearly aren’t incompatible, even though he’s basically implied that they are.

“Do you agree that it is possible for men to both be friends with some women and treat other women badly?” Harris said.

“Of course,” Kavanaugh responded, before going on to detail how many women from different points in his life have offered endorsements of his character.

The full exchange is worth watching:

Right after rumblings began to emerge of allegations of sexual misconduct against Kavanaugh more than two weeks ago, 65 women who had attended high school around the same time as him put together a letter attesting to his integrity and decency. It’s a tactic that’s been used time and again in the #MeToo era to bolster the perception of men who’ve been accused of misconduct — and paint them as allies to women who couldn’t possibly hurt them.

In doing so, it obscures the very point that Harris made effectively in her Thursday question: These two things are far from mutually exclusive.

Mike Bloomberg’s ad spend strategy is kind of working
Hustlers director Lorene Scafaria on making a movie about strippers “from the neck up”
Where’d You Go, Bernadette is a plodding, baffling misfire
Thousands will go uninsured in the Covid-19 outbreak because Republicans rejected Medicaid expansion
Can an online star really make it in Hollywood?
Joe Biden racks up another big endorsement: Elizabeth Warren