Kamala Harris has been criticized for her criminal justice record. She’s just begun to offer a response. 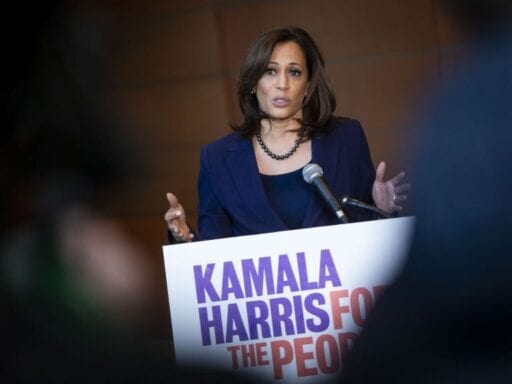 Harris provided some answers on the first day of her newly launched campaign.

WASHINGTON, DC — Fresh off announcing her presidential candidacy on Martin Luther King Jr. Day, Sen. Kamala Harris confronted some questions about her past track record on criminal justice during a press conference at Howard University, her alma mater.

“I was the Attorney General of California for two terms and I had a host of clients that I was obligated to defend and represent,” she said when asked about her role defending the Department of Corrections and its efforts to prevent transgender inmates from getting gender reassignment surgery. “I couldn’t fire my clients and there were unfortunately situations that occurred where my clients took positions that were contrary to my beliefs.”

Harris, a longtime prosecutor who’s served as San Francisco District Attorney as well as California Attorney General, has faced criticism about her “smart on crime” approach toward criminal justice, even as she’s deemed herself a “progressive prosecutor.”

A recent New York Times’ op-ed from University of San Francisco law professor Lara Bazelon argued that Harris was far from progressive, noting that she fought to keep individuals facing wrongful convictions in jail, fell short in her support of sentencing reforms and offered a confusing defense of the death penalty even though she’s personally against its use.

Harris’s aides told CNN that many of these claims were missing context, and did little to acknowledge the advancements she made to combat implicit police bias and keep first-time offenders out of jail.

Harris addressed some of these questions at the historically black university on Monday, when she was asked about any regrets she had from her time as a prosecutor. During the event, she broadly took “responsibility” for the actions her office had taken.

“The bottom line is the buck stops with me and I take full responsibility for what my office did,” she said. “There are cases … where there were folks that made a decision in my office and they had not consulted me and I wish they had.”

Her aides have noted that other line prosecutors were involved in some of the most controversial cases.

During the press event, Harris was a bit more specific when discussing transgender inmates’ rights, saying she tried to support those individuals even as she advocated on the state’s behalf.

“On that issue I will tell you, I vehemently disagree and worked behind the scenes to ensure that the Department of Corrections would allow transitioning inmates to receive the medical attention that they required, needed and deserved,” she said.

While Harris’s time as a prosecutor has already drawn heavy scrutiny, it’s not a part of her resume that she’s backing away from in any way. Harris intends to highlight her efforts as a prosecutor fighting on behalf of sexual assault victims and homeowners who were hurt by the foreclosure crisis as core tenets of her campaign.

As Politico’s Christopher Cadelago writes, Harris is highlighting these credentials in order to frame herself as a candidate who “stands for the rule of law,” and draw a stark contrast with Trump’s “lawless” presidency in the process.

“There’s a lot about what I did as a prosecutor that I’m proud of, including a recognition that there are fundamental flaws in our criminal justice system,” she said. Harris has repeatedly said it’s a “false choice” to decide between supporting law enforcement and reforming the system.

Students who attended the event were broadly excited about Harris’s candidacy and satisfied with her responses on criminal justice. “I think you change and you evolve, regardless,” one Howard Law student told Vox. “I think Sen. Harris has been very adamant about doing that…She’s really been open to showing herself as a progressive candidate and a progressive prosecutor.”

“The facts in [the New York Times piece] were very cherry-picked to fit a certain narrative that I think everyone is writing about because it’s easy to depict that,” another local college student noted. “If you want to talk about her record, you should talk about her full record and have an honest conversation.” The New York Times has since run a response to Bazelon’s piece from Lateefah Simon, a civil rights activist who previously worked with Harris.

Harris’s supporters at the Washington, DC event largely said she fielded key questions effectively. It’s likely she’ll face many more of them as the 2020 competition continues to intensify.