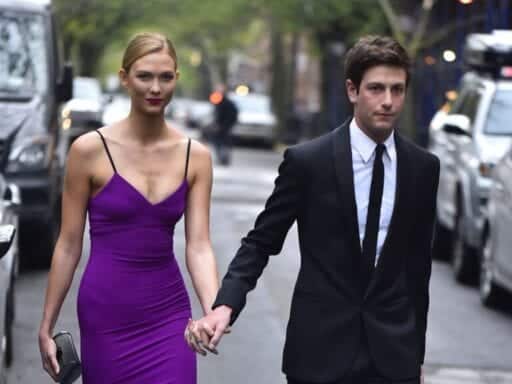 Ivanka Trump has already tweeted her congratulations to the happy, publicly liberal couple.

Some readers may still be reeling from Pete Davidson and Ariana Grande’s broken engagement, but today we close the week on a somewhat happier celebrity wedding note: Josh Kushner and Karlie Kloss got married.

Kushner, a 33-year-old venture capitalist and founder of the health care startup Oscar, is the younger brother of Jared Kushner, Ivanka Trump’s husband and an adviser to President Donald Trump. Kloss, 26, is an extremely successful supermodel — currently ranked seventh on Forbes’s highest-paid models list, earning $9 million between June 2016 and June 2017 — and is close friends with Taylor Swift. Swift recently outed herself as a Democratic voter, disappointing members of the far right who had previously claimed her as an “Aryan goddess” avatar. Neither Josh Kushner nor Kloss voted for Trump.

Once again, why do we care? Because in this case, it adds new layers of complication, wealth, and star power to the extended Trump family tree.

Who is Karlie Kloss?

Raised in St. Louis, Kloss hit the fashion circuit in the late ’00s and quickly became one of the industry’s more in-demand runway and editorial models, booking shows for brands like Calvin Klein and Marc Jacobs and shooting numerous spreads for Vogue.

After conquering the high-fashion world — that’s really not an exaggeration — Kloss starting taking on more commercial (and lucrative) jobs, becoming a Victoria’s Secret Angel in 2013 and signing a contract with Nike in 2014. In doing so, Kloss shifted her image from runway waif to bankable big name and athlete.

At the same time, Kloss was making bigger career moves to become not just a model, but a brand. In 2012, she collaborated with Momofuku Milk Bar on an assortment of healthy-ish (gluten-free, dairy-free) cookies called Karlie’s Kookies, some of the proceeds of which went to Lauren Bush’s Feed organization. You can still buy Kloss’s “Perfect 10” cookie today.

Kloss went on to launch her Klossy YouTube channel in 2015, using the platform to document her life and work (subscribers: 727,264). And she made coding — specifically, getting girls into computer science — her big cause, founding a program called Kode with Klossy. The venture landed her on the cover of Forbes as “the new face of coding.”

All of this was aided by Kloss’s high-profile friendship with Taylor Swift. Among their public appearances together, Kloss and Swift shot a joint Vogue cover in 2015 (“On the Road with Best Friends Taylor Swift and Karlie Kloss”), and Swift invited Kloss onstage on the London leg of her “1989” tour.

Some stans hoped their relationship was a romantic one; there was also some speculation that their friendship was over, which Kloss denied in a Vogue interview. (It looks like Swift didn’t attend Kloss’s wedding, since she was performing in Perth, Australia, at the time.)

Either way, Kloss’s ties to Swift are particularly interesting right now, as she marries into the Kushner family — and, in doing so, into the Trump family. Beyond Kloss’s own considerable earnings, Kloss’s Swift ties speak to the degree of fame, wealth, and influence that flows through this extended network, while also underscoring the political divisions within it: After remaining quiet during the lead-up to the 2016 election, Swift finally broke her silence early this month and endorsed two Democrats in the Tennessee midterm elections. That Instagram post, which now has more than 2 million likes, might have contributed to a rise in voter registrations in the state.

The liberal wing of the family

Unlike Swift, Kloss was very public about who she voted for in 2016: Hillary Clinton. On November 8 of that year, she tweeted a photo of herself filling out the ballot.

One of the greatest privileges we have as Americans is a voice. I’m proud to say I did my part, now it’s your turn. #ImWithHer pic.twitter.com/kJSNxLqy2u

Josh Kushner also didn’t vote for Trump in 2016, and he told Forbes that his values and voting history have skewed liberal. After the election he held hundreds of one-on-one meetings with employees at his VC firm, Thrive Capital, and at its portfolio companies.

“Josh went around to me and presumably every company and said, ‘I have no personal ties to this administration. I’m not responsible for their actions and won’t be able to get you special favors,’” Stewart Butterfield, the CEO of Slack, told Forbes. “‘Just consider me the same person who invested in your company—there is no connection, either good or bad.’”

While Kushner has remained relatively quiet throughout the first years of Trump’s presidency, one extremely prominent member of the Trump family extended her congratulations to the couple on Twitter, cementing the connection between Kushner, Kloss, and the White House.

So much love for you both as you begin forever together. ❤️ https://t.co/8lYSGrKpVu

Like Ivanka Trump, Kloss reportedly converted to Judaism to marry Kushner. When the two got engaged over the summer, Ivanka Trump commented on her brother-in-law’s Instagram, “♥️ So incredibly happy for you Josh! You and Karlie are blessed to have found one another. Here’s to a lifetime of love, laughter + adventure for you both! xx.”

With Kloss and Kushner’s wedding in the books, the Trump family gets a little bit bigger and a lot weirder.

The evidence for everyone wearing masks, explained
How the good economy is benefiting workers with disabilities
Today is Black Women’s Equal Pay Day. Here’s what you should know about the gap.
Joe Biden wins Oklahoma, another notch on his belt
6 things to know about telehealth
Coronavirus is in the air. Here’s how to get it out.