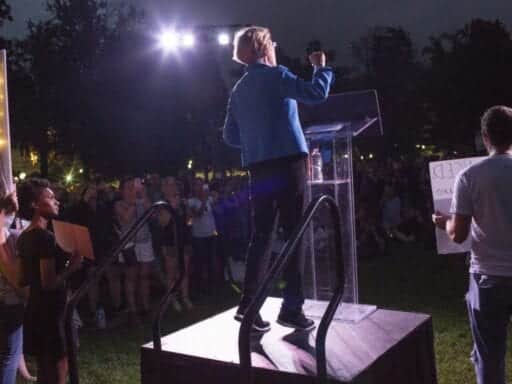 Kavanaugh’s confirmation battle will make the Supreme Court a pivotal issue in 2018 — and 2020.

The new Supreme Court justice — confirmed by a 50-48 vote in the Senate after a bitter past few weeks — will replace Justice Anthony Kennedy, widely regarded as an important swing vote on the court. Kennedy, though considered a conservative, has sided with liberal and moderate justices in the past to uphold such key decisions as Roe v. Wade and affirm parts of the Affordable Care Act.

But a looming question remains as to whether another seat could open before 2020, giving President Donald Trump the chance to nominate yet another justice and fully solidify a conservative Supreme Court for decades to come.

Some Senate Democrats widely viewed as 2020 presidential contenders made it clear this weekend they are fully committed to the fight to try to make sure that doesn’t happen. Even as some of these Democrats, including Sens. Elizabeth Warren (D-MA), Cory Booker (D-NJ), Bernie Sanders (I-VT), Kamala Harris (D-CA), Amy Klobuchar (D-MN) and Kirsten Gillibrand (D-NY), are stoking speculation they are readying to run against Trump in two years, they are first focused intently on the November midterms.

“May our outrage get us out working. #midterms,” Booker tweeted, just hours before he headed to Iowa to headline the Iowa Democratic Party fall gala. Harris, Gillibrand, Klobuchar, Sanders, and other Democrats also tweeted and spoke about the importance of women and Democrats showing their anger by heading to the polls.

We can’t stop fighting. Progress doesn’t happen overnight. It can be painful. It can be slow. But now is the time to roll up our sleeves, knock on doors, and register people to vote. In one month we have the chance to vote and stand up for the country we love.

Warren — one of the few Senate Democrats who has explicitly said she’s considering a 2020 run — spoke at an anti-Kavanaugh protest in front of the Supreme Court on Saturday, encouraging voters to head to the polls in 30 days and “vote Democrat up and down.”

I’m about to go vote against Brett Kavanaugh. But first, I want to tell everyone who fought with us what comes next: https://t.co/4NgWnpObfx

“This hurts, but I want to be clear: I am not sorry I got in this fight,” Warren said. “I’m telling you why I’m not sorry: because when we fight, we get stronger.”

As Warren spoke in front of the Supreme Court about the importance of voting in 2018, some in the crowd clearly had another election in mind. One woman in the crowd yelled, “Run for president!” Warren had to briefly pause her speech as the crowd cheered.

Struggling with defeat on Kavanaugh, Senate Democrats are focused on the midterms

Even though 2020 may be on their minds, many Senate Democrats are much more focused on the 2018 midterms, which are just a month away.

Current polls are showing Democrats with a decent chance of retaking the US House of Representatives, but the Senate flipping blue is considered much more of a long shot. Democrats are hoping the raw anger of women and sexual assault survivors after Kavanaugh himself was accused of sexual assault (which he has denied) will be enough to take Republican seats in the Senate.

“It’s a sad day. But the recourse will have to be on election day,” Klobuchar told BuzzFeed’s Paul McLeod as she headed into the chamber to vote against Kavanaugh’s nomination.

Nearly every other Democratic senator had the same message on Saturday as they left Kavanaugh’s confirmation vote. Many seemed distraught, some on the verge of tears.

Sen. Richard Blumenthal (D-CT), a member of the Judiciary Committee, told Vox that Saturday was the “angriest and saddest time” for him in his nine years in the US Senate. But Blumenthal, like other senators, encouraged voters to turn that anger into civic action at the polls.

“For folks that are anguished or angry at this day, my urging is vote,” Blumenthal said. “Vote, and take three people to the polls.”

There is a question of whether the Kavanaugh controversy will also motivate Republicans to go to the polls in November, in a year where they have appeared to lack the same enthusiasm of Democratic voters, until very recently.

When Kavanaugh’s nomination appeared to be in real trouble last week, it had the effect of revving up the Republican base in a way pollsters haven’t seen all election cycle. An NPR/Marist poll released on Wednesday showed that 80 percent of Republican voters polled said the midterms were “very important,” basically on par with Democratic voters, who were at 82 percent. In July, Republican voters lagged 10 percentage points behind Democrats when asked how important the midterms were.

But now that Republicans managed to narrowly confirm Kavanaugh, Democratic voters have more reason to be angry — which could add extra incentive to go for the polls.

“I’ve never seen so much pain in any political situation, and I believe that pain is going to manifest itself in electoral fury,” Sen. Brian Schatz (D-HI) told Vox on Saturday.

Given the heightened stakes if Trump — or a future Democratic president — has the opportunity to fill another Supreme Court vacancy, the next 30 days until November 6 are pivotal for Democrats.