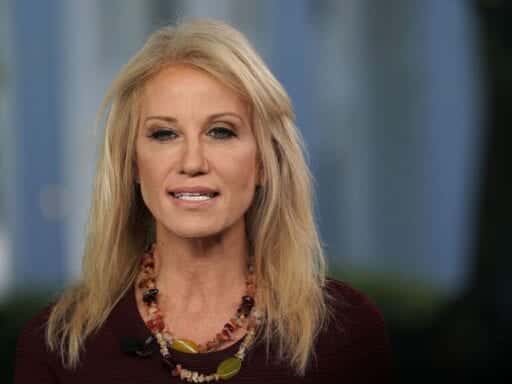 She added, “This is no time to be driving God out of the public square.”

White House counselor Kellyanne Conway blamed Saturday’s Tree of Life synagogue shooting in which 11 were killed on “the anti-religiosity in this country.”

Speaking to Fox & Friends on Monday morning, Conway defended Trump against accusations that his nationalist rhetoric — including his continued stoking of anti-Semitic conspiracy theories against Jewish philanthropist billionaire George Soros — contributed to the radicalization of alleged shooter Robert Bowers.

CONWAY argues the real victims are White House staffers like her: “The kind of rhetoric that is said day in and day out about this WH, the people who work here, the president, the VP, their families – it’s got to stop… In this case the president is leading the country to heal.” pic.twitter.com/oUuDfgdPUn

Trump “denounced anti-Semitism,” Conway told the show’s hosts, before pivoting the discussion to the state of religion in America.

“The anti-religiosity in this country that is somehow in vogue … making fun of people who express religion, the late-night comedians, the unfunny people who go on TV. … It’s always anti-religious,” she said, before invoking the 2015 fatal shooting of nine black parishioners in a Charleston, South Carolina, church by a white supremacist, Dylann Roof. “These people were gunned down in their place of worship,” she said of both the Charleston victims and those of Saturday’s shooting, before concluding that the shootings were a sign that “this is no time to be driving God out of the public square.”

While it is true that there have been a number of attacks on places of worship in America, almost none has been explicitly motivated by hostility toward religion itself. From the Knoxville, Tennessee, shooting at a Unitarian Universalist church in 2008 to the 2012 shooting at a Sikh temple in Oak Creek, Wisconsin, to the Charleston shooting in 2015, these attacks have generally been motivated by racial or ethnic hatred. Roof and Bowers alike have openly expressed their white supremacist and anti-Semitic sentiments and motivations for their attacks.

Conway’s reframing of the situation is politically expedient. By framing Bowers’s violence as “anti-religious,” rather than anti-Semitic, she takes the spotlight off Trump by affirming the kind of Christian nationalism that has characterized this administration’s wider rhetorical agenda.

But Conway has minimized the brutality of the deaths of 11 Jews — and the toxic legacy that allows anti-Semitism to flourish in America.

The Paycheck Protection Program has already run out of money
Deep cleaning, packing supplies, and a concession: The Trumps plan their White House exit
Did Brazilians vote against democracy on Sunday?
Anderson Cooper described Trump as “an obese turtle on his back flailing in the hot sun”
The online board game Dominion is the only thing keeping me sane during coronavirus
Trump and the “P Act,” debate over face coverings: Friday’s coronavirus news