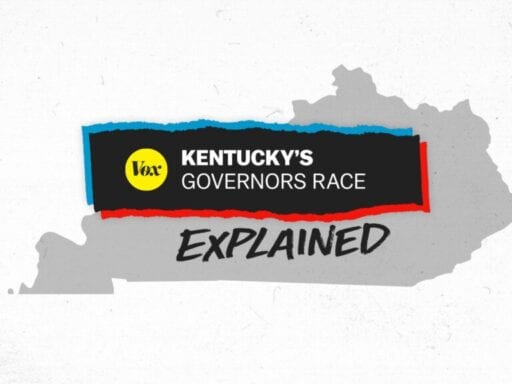 Kentucky Republican Matt Bevin has the distinct reputation of being among the country’s most unpopular governors. On November 5, 2019, Bevin is up for reelection, and the race is a total toss-up.

Democrats are banking on Kentucky’s Democratic Attorney General Andy Beshear to unseat him. Earlier this year Beshear, who has out-fundraised and out-spent Bevin, led in the polls, but going into Election Day the two are in a dead heat; a mid-October Mason Dixon Line poll showed 46 percent of likely voters backing Bevin, and 46 percent backing Beshear.

In many ways, this race shouldn’t be this close. Republicans have supermajorities in both of Kentucky’s state legislative chambers, and President Donald Trump’s popularity in the state is unwavering. (He won the state by 30 points.) It’s home to Senate Majority Leader Mitch McConnell, and all but one of the state’s six House members are Republicans. Democrats had a high profile loss in the state just last year, when top recruit Marine Lt. Col. Amy McGrath failed to unseat Rep. Andy Barr. (McGrath is now challenging McConnell in 2020.)

But in the last four years, Bevin, who won handily by 9 points in 2015, has picked political fights that many voters may carry with with them to the polls. The Republican governor is fighting to push people off Medicaid and cut back teachers’ pensions. Bevin famously said protesting teachers had a “thug mentality,” were “selfish,” and “ignorant.”

“What Bevin has done is that he has gotten into these personal wars with average people,” Jessica Taylor, an editor at the nonpartisan Cook Political Report, said. “He’s just someone who doesn’t play well with others.”

Bevin’s threat to end Medicaid expansion in the state could throw hundreds of thousands of people off their health care, he’s already signed restrictive abortion bills and pushed for serious budget cuts in a state home to some of the United States’ poorest people.

Republicans know Bevin is at risk of losing. Trump is scheduled to hold a rally in Kentucky the night before Election Day, and Vice President Mike Pence is campaigning for the governor on the ground. Meanwhile, Beshear, who has spent the last four years fighting Bevin from within the state’s executive branch as attorney general, is hoping voters will ditch their national political allegiances in an off-year election.

The race is being cast as a referendum on Trump; can a Democrat win in a deep-red state one year from a presidential election? But Kentucky’s governor’s race is better described as a test of Trump’s influence over Republicans. Is love for Trump enough to overpower a strong distaste for a state leader?

Republicans want this race to be about Trump

Trump is popular in Kentucky. Bevin is not. Republicans know this: If Bevin wins it will be because his push to make the race about Trump was successful.

“The basic contours are pretty simple, Republicans want to nationalize the race, make Bevin into Trump and make Andy Beshear into your standard radical Democrat,” Scott Jennings, a Kentucky Republican strategist and commentator said. If the governor’s race becomes “a shirts versus skins exercise” about Trump, Jennings said, then Republicans have more people on their team.

Bevin is leaning into that strategy, explicitly. He talks about Trump on the campaign trail. Trump is prominently featured in his campaign ads — ads focused on the “threat” of illegal immigration. Trump himself is coming to Kentucky to campaign for Bevin the day for Tuesday’s election, to energize the base to get to the polls.

It’s easy to see how this could work. Particularly as Democrats escalate their impeachment inquiry, turning Bevin into Trump’s Kentucky defender is likely to rally Republicans in a state where the president’s approval rating has been consistently high.

But Kentucky also has a strong Democratic history that Beshear is a part of. Beshear’s father, Steve Beshear, served three four-year terms as governor (one term in the 1980s and again from 2007 through 2015). Even as President Barack Obama’s status in the state tanked, the Beshear name remained in Kentuckians’ good graces.

“If who occupies the White House was going to determine who occupies the governor’s mansion in Frankfurt, the state has pretty well disproved that,” says Matt Erwin, a Democratic strategist that worked on Adam Edelen’s gubernatorial campaign, who lost to Beshear in the primary, running to his left. “It’s definitely a factor, but it’s not the only factor.”

But Andy Beshear is not his father, who was seen as a natural, homespun, retail politician. Interviews with Republican and Democratic strategists and neutral observers pegged Beshear as “cerebral,” “milquetoast,” and “not a very compelling” candidate. That said, Beshear has shown he has a formidable fundraising operation, and has so far kept his campaign away from the national spotlight.

Beshear’s message isn’t about Washington, DC, or Trump, but about Bevin. In the gubernatorial debates Beshear emphasized Bevin calling teachers names. His ads have been about the opioid crisis and health care. He’s responded to Bevin’s ads about immigration by citing his endorsement from the Fraternal Order of the Police. And that all seems to have Republicans worried.

“Bevin clearly knows this race is close,” Al Cross, a University of Kentucky professor and political commentator, said. “He’s bringing in Trump to close the sale. You don’t pull out stops like this if you think you’ve got it wrapped up.”

The stakes are high for Democrats

Kentucky Democrats, like Beshear, hold some statewide seats. The state’s secretary of state, Alison Grimes, is also a Democrat, though she is not running for reelection. Her father was convicted of illegally funneling her money for her 2014 run against McConnell, and she herself came under scrutiny for breaching state employee’s voting privacy.

But Democrats have been overshadowed by a staunchly conservative state legislature with supermajorities in both chambers, and a powerful Republican-heavy congressional delegation.

Under Bevin’s leadership, the state has passed conservative labor laws, like a “right to work” policy to undercut unions, and a repeal of the prevailing wage, which guaranteed public works employees base salaries. He has allowed charter schools to come to Kentucky while proposing cuts to public school. And he’s also signed several anti-abortion laws, like requiring ultrasounds and showing patients pictures of fetuses before performing an abortion.

Democrats see this race as a must-win situation.

“We are a poor, largely rural state that in far too many places is too sick and too lacking in education and opportunity to keep doubling down on policies and programs that aren’t going to give us a chance to succeed in the future,” Erwin, the Kentucky Democratic strategist, said. “We have to say we can look at Kansas and say those policies don’t work. … This state will not survive a failed political science experiment where we see what happens if we shrink government.”

That said, even if Beshear is to win, he would still face an uphill battle in a state that gives the legislature power to override vetoes with a simple majority.

Will a 2018 messaging redux work in Kentucky?

The messaging wars in Kentucky are familiar. According to an analysis from NBC, 86 percent of all ad spending the Kentucky gubernatorial race has been focused on health care and immigration — a rehashing of the 2018 midterms.

Bevin is using the same script Republicans used nationwide last year: fear-mongering images of the MS-13 gang members and migrants climbing over a wall, he is labeling Beshear as a “pro-illegals liberal” and himself “pro-Trump.”

Beshear, meanwhile, has emphasized the reasons Kentuckians really don’t like Bevin. Much of that comes down to Kentucky’s vastly underfunded pension system, one that since 2000 has accumulated $43 billion in debt. Bevin pushed a reform that cut pensions for new teachers and funding for public schools, resulting in big teacher protests. Earlier this year, Kentucky teachers called in sick en masse shutting down every single public school in the state.

In response, Bevin called teachers “ignorant” and “selfish,” and said kids were likely exposed to sexual assault because teachers were protesting instead of staying in the classrooms, a comment he eventually apologized for, but not without saying teachers were acting like “thugs.” Beshear is promising teachers raises, and new funding streams for the pension system — proposals Bevin attacks as unfeasible.

Democrats have also been focusing on health care, namely claiming that Bevin is “trying to take health care away” from families. Beshear’s father expanded Medicaid in Kentucky as governor under the Affordable Care Act to roughly 400,000 people. It’s been an incredibly popular program, covering 1.2 million people in the state.

Bevin has threatened to end Medicaid expansion in his push to implement work requirements, premiums, and co-payments for the state’s most vulnerable population. As Dylan Scott explained for Vox, there’s a lot of evidence that most Medicaid recipients do work, and many could still lose their coverage because the requirements aren’t structured to address the irregularities of low-income work.

Beshear’s ads have been on preexisting conditions, Medicaid expansion, and affordability.

This messaging war helped House Democrats sweep the majority in the 2018 midterms, and unseated Republican leaders in states like Wisconsin, Arizona, and Michigan, where a weakening of traditionally conservative suburban pockets delivered Democrats wins.

But that formula didn’t play out as well in Kentucky. Democrat Amy McGrath failed to unseat a House Republican in Lexington, Kentucky. And while Democrats in the state see potential in some of the suburbs around Louisville, where Kentucky House Republicans in Jefferson County lost two of their five seats, Republicans easily held on to their strong majorities in the state legislature in 2018.

It comes down to turnout: Will Republicans stay home with Bevin on the ballot, and will Democrats be energized to oust an unpopular Republican?

“Both parties think they are going to win; both parties wouldn’t bet the farm on it, but turnout projections are all over the board,” Jennings said.