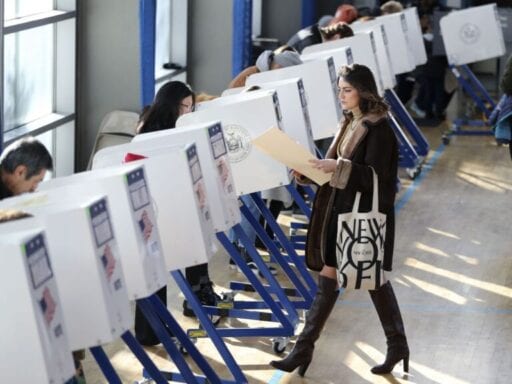 Share
Loading...
A voter walks to a booth to fill in her ballot at a polling station in Brooklyn, New York, on November 8, 2016.  | Wang Ying/Xinhua/Getty Images

Next Tuesday, New York City will vote to decide on whether to switch to a ranked-choice voting system.

On Tuesday, New York City residents will vote on whether to double the number of Americans who use a new system of voting — ranked-choice voting — to elect officials.

Technically, Ballot Question 1 amends the City Charter to “Give voters the choice of ranking up to five candidates in primary and special elections for Mayor, Public Advocate, Comptroller, Borough President, and City Council beginning in January 2021.”

But practically, it would be a tremendous lift for a growing electoral reform movement that includes Maine; Sante Fe, New Mexico; Oakland, California; and Memphis, Tennessee. As the biggest city in the nation (population 8.6 million), New York City would add considerably to the users of ranked-choice voting.

Most expect New Yorkers to approve ranked-choice voting on Election Day. A wide range of groups and local leaders have endorsed the reform, and it has faced little opposition. New York City has often been on the forefront of good government reforms. Its small-donor campaign finance matching system was the first in the nation, and a model for the campaign finance proposal in HR 1.

Supporters argue that ranked-choice voting can reduce polarization and divisive campaigning by changing the incentives. Instead of just competing to be voters’ first choice, candidates are also competing to be voters’ second, third, and sometimes fourth choices, encouraging candidates to make wider appeals. Ranked-choice voting also tends to encourage a more diverse candidate pool, and leaves voters feeling happier about the process, both because their vote is more likely to matter and because they can vote for their favorite candidate without worrying about playing spoiler.

New York City may become the most populous place in the US yet to adopt ranked-choice voting, but it’s hardly a pioneer.

Twenty cities in the United States have already adopted ranked-choice voting. In 2018, Maine became the first state to adopt it for federal elections. That catapulted the reform to a national spotlight, with presidential candidates like Sens. Elizabeth Warren and Michael Bennet now championing it. Australia has used ranked-choice voting for 101 years, and Ireland has used it for 98 years.

Studies have shown that in places that have adopted it, ranked-choice voting has made politics a little less nasty. Candidates spent less time attacking each other, as compared to similar cities that didn’t adopt ranked-choice voting. Voters in cities with the system reported being more satisfied with local campaigns as a result (again, as compared to similar cities).

Under ranked-choice systems, voters don’t have to try to figure out whether to support the candidate with the best chance of winning or the candidate they like best but fear can’t win. They can vote sincerely for their favorite candidate on their first choice, and then select back-up choices if their preferred candidates don’t do well. This also allows voters to express their full range of preferences, sending clearer signals than the traditional approach to voting. And in the end, more voters are likely to wind up voting for a winner. Voters prefer this kind of “preferential” voting because they consider it fairer.

No voting system is perfect. Critics of ranked-choice say the task of having to rank multiple candidates unfairly overwhelms low-information voters, and that the added complexity hits low-income minorities hardest. The editorial board of the San Francisco Chronicle last year called the process — in place for more than 15 years — “a baffling experience for many voters,” and decried a plan by two San Francisco mayoral candidates to defeat another, London Breed, by “gaming” the ranked-choice system.

However, surveys have shown no difference in understanding of ranked-choice voting between white and nonwhite voters, and more than 90 percent of voters who have used the system describe it as simple. Some studies show turnout declines among minority voters. But most likely, when properly accounting for other factors, turnout has probably remained stable, with no declines in poorer precincts.

Americans are showing greater interest in alternatives to our voting system

However, in a heavily Democratic city like New York City, the deciding election is often the Democratic primary. Because of this, the primary often generates a crowded field, which means that a candidate can win with a mere plurality — not a majority — of votes under the current rules.

According to one analysis, in the last three election cycles, almost two-thirds of multi-candidate city primary contests (64 percent) did not generate a majority winner. And in almost a third of those elections (30 percent), the winning candidate got less than 40 percent of the vote. In other words, under the current rules, candidates preferred by far less than half of their constituents get to represent all of their constituents.

Under ranked-choice voting, outcomes like this can’t happen. The winning candidate needs to earn true majority support — a plurality does not make a victory. And if no candidate gets a majority of first-preference votes, that’s when the rankings kick in, and candidates are eliminated and their preferences redistributed until one candidate has a winning majority. This ensures that candidates need to build broad appeal. A candidate who doubles down on an intense but ultimately narrow group of supporters cannot win.

If New York City adopts ranked-choice voting, it will join Eastpointe, Michigan, a Detroit suburb, as a fellow 2019 adoptee. Eastpointe agreed to switch to ranked-choice voting in June as a remedy for Voting Rights Act violations. The Department of Justice approved the new voting system as a way to help the city’s minority voters better elect their candidates of choice. At the time of the violation, the city council was 100 percent white, even though the city’s population is only 42 percent white. Most expect this will change under the new voting rules.

There’s more to come. 2020 is shaping up to be a big year for ranked-choice voting. Four states will use it in the Democratic primary — Alaska, Hawaii, Kansas, and Wyoming. And Maine voters will use it for the first time in the general election for president. And both Alaska and Massachusetts will likely vote on ballot measures in 2020 to adopt ranked-choice voting statewide.

So ranked-choice voting is catching on. If New Yorkers vote themselves into the ranks, it will be yet another sign of the movement’s momentum — and a growing desire among Americans to improve our political institutions.

Lee Drutman is a senior fellow in the political reform program at the New America think tank and the author of the forthcoming book, Breaking the Two-Party Doom Loop: The Case for Multiparty Democracy in America.

The border crisis is a reminder that Trump has no idea what he’s doing
A Christmas Carol, explained by a 5-year-old
The Senate impasse over the massive $1.8 trillion coronavirus stimulus, explained
4 false claims in under 30 words: Kevin McCarthy’s IG report tweet is an exercise in gaslighting
Justice Department charges Russian national with conspiring to interfere with 2018 midterms
Average body temperature appears to be dropping. Researchers aren’t sure why.