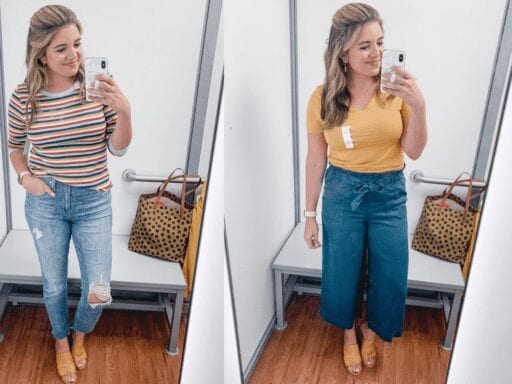 Want to know how a Target top or some Everlane pants will fit? They’ll tell you.

Lauren Dix is whispering into her phone in the dressing room of a Madewell — politely, so that her neighbors in the next stalls won’t get weirded out. She’s trying on a mustard yellow, flutter-sleeve eyelet top while her baby gurgles in the stroller behind her. The shirt is a size small, though she prefers it in her usual medium. The verdict? Cute, and true to size (denoted as “TTS”). She decides it’s worth the $30, and when Instagram flips to her next story, she’ll try on another.

Lauren is a fashion influencer beloved by her followers for providing a very specific service: trying on clothes at the stores they shop. Lauren regularly films Instagram stories from inside the fitting rooms at Target, Walmart, Old Navy, Aerie, H&M, and Ann Taylor Loft, affordable brands with storefronts across America’s cities and suburbs. She wears the clothes viewers have only seen laid flat online or displayed on the body of a professional model and then gives her honest opinion. Her followers know her exact height, shape, and measurements — 5’7” and a half with a short torso and size 29 jeans — which they then use to judge whether a product will fit their own bodies and ask questions about fit.

Instagram fashion influencers, to draw on the most popular stereotypes, have traditionally been peddlers of envy and aspiration among their followers, known for posting expensive clothing worn on even more expensive vacations in the hopes that offering a glimpse into the lifestyle of the 1 percent will attract eyeballs and likes.

It does! But among their peers are a different class of clothing influencers: those who meet their audience where they are, whose relatability and, crucially, their financial sensibility are what makes them worth following. In doing so, these influencers become something like self-appointed ambassadors for ordinary brands — Nordstrom, Sephora, Zara — brands that certainly don’t need anyone to tell people to shop there, but whose barrage of products arguably require a trustworthy curator.

Lauren’s been documenting her daily outfits on her blog, By Lauren M, since 2012, but it wasn’t until 2017, after seeing a friend posting her in-store try-ons, and the positive reactions she received, that Lauren began doing it herself. “I immediately had people saying, ‘This is awesome, you helped me find new things. I don’t have to go into the store. You just made shopping so much easier,’” she says. “Also, it was profitable. So, it just made sense to keep going.”

That profitability came from affiliate links, personalized URLs to a third party’s products so that the poster can earn a commission. They’re common practice among both recommendation websites and bloggers, many of whom receive a majority of their income based on affiliate links alone. Lauren now includes links to purchase the items via either the “swipe up” feature on Instagram stories or on her blog, and she receives a cut of the sale; affiliate links provide around 30 percent of her income from blogging, which ranges from $2,500 to $6,000 per month (the other 70 percent comes from sponsored content).

Sure, filming content inside a Target dressing room can be awkward, but Lauren says she’s grown accustomed to it over time, and she always tries to keep her voice at a respectful level. No employee has caught her yet, but she’s gotten to know the managers at her local Ann Taylor Loft, and the staff at Madewell recognize her when she comes in.

Curiously, however, she has not partnered with any of the brands on a corporate level. “Most of them have no idea who I am,” she says. At 68,000 followers, she shepherds a devoted community of fans, but the number puts her far below famous fashion influencers like Arielle Charnas of Something Navy, who boasts 1.2 million and last year debuted a sold-out clothing collection with Nordstrom.

Brands, ever concerned about their own image, may be skittish about partnering with an influencer who shops at a competitor they don’t want to be associated with. When the account is devoted solely to a single brand, however, it may be easier to win over the brand’s attention: This spring, Zara invited the women behind the Zara shopping account @thedevilswearzara to its headquarters.

Jess Carpenter of @jesswithless now makes nearly as much as she did in her former salaried position on her Instagram account, which showcases her outfits, largely from brands with a commitment to sustainability (Everlane, Reformation, Sézane). Though she doesn’t have a relationship with Reformation, she became an affiliate marketer for Everlane through the brand’s application process and now partners with Sézane.

Like Lauren, her followers can use her body type as a reference point; she lists her exact measurements on her blog. “I get a lot of petite people that are like, ‘Oh my gosh, I didn’t know you were this short and that I could pull off wide pants!’” she says.

Ultimately, try-on influencers see themselves as a resource, a recommendation service that specializes in the products by the brands you already shop. Followers trust them because yes, they’re making money off affiliate links, but the clothes they try on are ones they say they’d pick up anyway.

Jess explains that if she did do a sponsored post for a product that she wouldn’t have spent money on otherwise, her followers would be able to tell. “I remember I did one sponsored post in my stories that I did not feel good about, and it’s so crazy how much I feel like people can see that, and I ended up losing a lot of followers over it,” she says. “They’re mistakes that you have to make, and there’s no new-hire orientation. There’s no guide on what we’re doing. It’s just the Wild West.”

That presumed authenticity is what allows try-on influencers to build such an intimate relationship with their following. It’s also why followers can feel betrayed when they think influencers and brands are working too closely together or if followers think their favorite influencer is “selling out” by promoting products that they both know aren’t actually worth buying. Certain brands, like FabFitFun subscription boxes, HiSmile teeth whiteners, SugarBearHair gummies, or any “skinny” (read: laxative) teas, have been so associated with vapid Instagram marketing that many influencers explicitly avoid them (former Bachelorette Hannah Brown said as much in a recent interview).

Yet most established brands want the same thing: to work with influencers who already buy their products so that the resulting sponsored content looks just like anything else they’d post. Old Navy’s director of brand engagement Julie Luker says, “When we partner with an influencer who already organically posts about the brand, there’s an inherent authenticity to how they speak to our products, and their followers know their recommendations are credible.”

Now there are even agencies devoted to helping brands find their most devoted shoppers to use as social media mouthpieces instead of relying on general influencers. Zyper, a San Francisco-based marketing platform that has raised $6.5 million in venture capital, works by analyzing social media sites to determine the top 1 percent of a brand’s fans, then connecting with them via the app. Those fans then can become “brand advocates” in exchange for product, according to Vogue Business.

That a brand like Zyper can exist and find success is indicative of a growing skepticism toward the traditional influencer model, where anyone can pay to end up on a perfectly curated feed. Bloggers have always been recipients of hate, of course, but distrust — be it in truthful follower counts or unmarked sponsored content — is growing. Brands, too, have become wary about working with influencers — a recent New York Times story recounts instances in which Instagram users stole popular influencers’ identities to score free stuff; another features a business owner lamenting the deluge of Instagrammers asking for free stays in his Philippines beach club (he’d prefer cash, thanks).

But in Lauren Dix’s community, nobody’s really worried about that. She’s just a cool, funny mom who’s particularly good at shopping at the stores where millions of other women just like her shop. “I don’t like spending money on items that are going to be out of fashion in like six months,” she says. “It just doesn’t make sense to me.”

In her seven years of blogging, Lauren says she’s received only a handful of negative comments. It’s the good ones that stick with her, though. One, in particular, was from a woman who’d battled depression after having kids, who told her that Lauren’s videos had helped give her some of her confidence back. “Those are the kinds of comments that just really touch your heart and you’re like, ‘Okay, I’m not just doing this frivolous thing, I’m actually impacting people,’ which is meaningful to me.”

We are currently living in a great shopping paradox: There are so many places to shop, yet practically zero brands that actually make us feel good about shopping there. There are too many products, but no marketing tactics that have succeeded in feeling truly convincing. Even though some brands seem to have distanced themselves from them, try-on influencers, with their small, devoted communities and perceived authenticity, ironically may be the best marketing tactic of all.

Trump threatens protesters with ‘vicious dogs.’ Some note they’ve seen that before.
Mike Pompeo’s big announcement about Israeli settlements, briefly explained
Climate change and soaring flood insurance premiums could trigger another mortgage crisis
Poll: Americans are afraid of ending the coronavirus lockdowns too soon
Trump’s new press secretary has a history of birtherism and wildly inaccurate coronavirus takes
Hurricane Delta: What we know about the storm heading toward the Gulf of Mexico