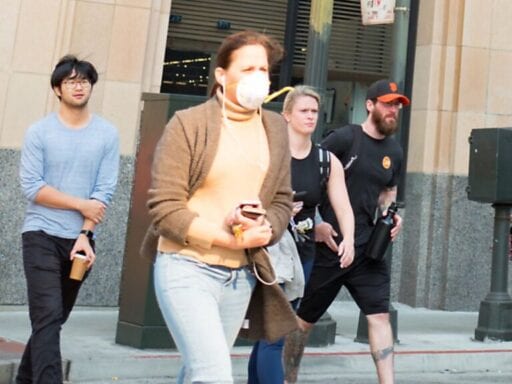 Share
Loading...
A woman in San Francisco wears a face mask amid large-scale pollution in the city in October 2017. | Smith Collection/Gado/Getty Images

The increase might be due to overly lax policies from both Trump and Obama.

Air pollution is killing more people during the Trump administration than it was under President Obama. Air pollution was responsible for 9,700 more deaths in 2018 than it was in 2016, according to a new paper by economists at Carnegie Mellon.

The researchers, Karen Clay and Nicholas Muller, argue that some of the increase is due to non-regulatory factors, like an increase in wildfires and economic growth. But they note a decline in Clean Air Act enforcement under Donald Trump that could be responsible as well.

The Trump administration has so far rolled back 24 different regulations and accords related to air pollution, according to a New York Times analysis, including rules around air pollution from refineries, industrial pollution of 189 different substances, and regulation of “haze” in national parks.

But the specific kind of pollution addressed in the new study is what experts call PM2.5: microscopic particles 2.5 micrometers or less wide (a small fraction of the diameter of a human hair) arising from human industry, including coal mining and burning, gasoline combustion, construction dust, etc.

PM2.5 can kill people in a number of ways: by causing “heart disease and stroke, lung cancer, chronic lung disease, and respiratory infections,” to name a few listed in a recent report from the Health Effects Institute and the Global Burden of Disease project. That report estimates that PM2.5 killed about 4.1 million people in 2016 alone through those mechanisms. (Undark also had an excellent in-depth series on PM2.5 last year if you want to learn more.)

In the new paper, Clay and Muller analyze monitoring data collected daily as part of the Environmental Protection Agency’s Air Quality System in 653 US counties. Because the collections were daily, that dataset is quite rich: 1.8 million different readings from 2009 to 2018. Overall, that dataset shows that from 2009 to 2016, PM2.5 pollution declined by 24.2 percent. This was a fairly steady decline, too: After holding mostly still from 2009 to 2011, pollution declined noticeably each year from 2011 through 2016.

But between 2016 and 2018, PM2.5 pollution rebounded, growing by 5.5 percent. The authors look into three potential causes of the increase: economic growth, wildfires, and a decline in enforcement activity.

Many PM2.5 pollutants — like nitrate, sulfate, and elemental carbon — are primarily emitted by power plants, vehicles, and industrial facilties; during economic booms, those facilities are used more and produce more emissions, which could account for the increase from 2016 to 2018.

The study finds that sulfur emissions, which are associated with coal plants, continued to decline from 2016 to 2018, while nitrate and elemental carbon increased. “The chemical composition of particulates point to increased use of natural gas and to vehicle miles traveled as likely contributors to the increase,” the authors conclude. Natural gas consumption likely accounts for a good share of the nitrate increase, and diesel fuel consumption for the elemental carbon increase.

Wildfires of the kind that have been increasing in regularity in California and the Western US recently can also cause large-scale PM2.5 emissions. But Clay and Muller argue that these wildfires could not on their own account for the pattern of pollution falling and then increasing; if you exclude wildfire season (June to September) in the West, Midwest, and California, and exclude November 2018 in California when two major wildfires occurred, the same pattern remains.

That leaves the third potential cause the paper investigates: a decline in enforcement, as measured by EPA penalties imposed for violations of section 113d of the Clean Air Act. More than 3,000 measures under the section have occurred since 2009, making it the most common enforcement action involving the Clean Air Act that results in an actual fine or penalty.

That said, there’s no question the Trump administration has been trying to make it easier to emit PM2.5 pollution. As Vox’s Umair Irfan reported last year, the Trump EPA has been cracking down on the use of reductions of PM2.5 as a “cobenefit” in justifying regulations meant to reduce other kinds of emissions. That, in practice, means fewer restraints on PM2.5 emissions.

This is despite the fact that there’s a large and growing body of research implicating fine particle pollution in everything from lower school test scores to lower work productivity to deaths (particularly in the elderly). Just in 2019 alone, studies have come out associating particulate pollution with violent crime, lower GDP, childhood stunting in India, and increased mortality.

We have decades of experience preventing this kind of pollution through regulatory action, and the emerging evidence base suggests that doing so could save lives, prevent crime, and grow the economy.

8 great TV comedies to watch while you’re looking at your phone
Italy’s plan to drastically relax social distancing is a “calculated risk”
Mali’s president was elected after a coup. Another coup just removed him from power.
How to find fitness motivation after this train wreck of a year
The Oscars’ international film category is broken
The faulty technology behind ankle monitors