Members of Congress are richer than ever before, but plenty downplay their wealth 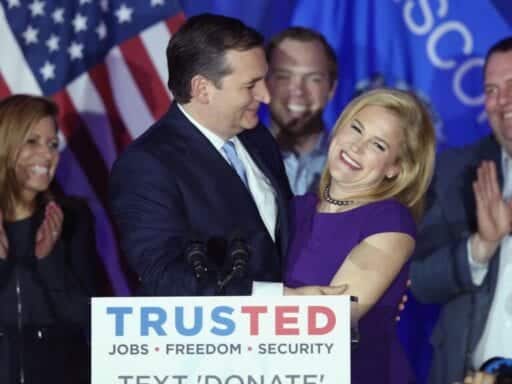 Heidi Cruz recently said she works 70-hour weeks and can’t afford a second home. It was a failed attempt to sound like a regular person.

Heidi Cruz works long hours to keep a roof over her family’s head, just like you — or, at least, that’s what she wants you to think.

Cruz, an investment manager at Goldman Sachs and the wife of Texas Sen. Ted Cruz, isn’t exactly struggling financially. But a recent profile in the Atlantic paints her as a long-suffering, hardworking senatorial spouse who put her own professional ambitions on hold in order to bolster her husband’s political career — and who works 70-hour weeks to support their family, “not only because she wants to, but because she has to.”

It’s her, not Ted, who is the family’s “primary breadwinner.” And though the Cruz home — much like Heidi herself, according to Atlantic writer Elaina Plott — is “expensive, serene, [and] draped in pretty fabrics,” they only have one. “Yeah, we’re seven years into this,” Heidi said, “and we’re not buying a second home anytime soon.”

Predictably, her “tone-deaf” comments about her family’s economic position drew swift backlash, including from HuffPost, the Daily Mail, the New York Daily News, and lots of people on Twitter. But Cruz is far from the only politician or political spouse to be accused of being out of touch with ordinary Americans’ financial struggles — and in an age of increasing inequality, where politicians live, where they vacation, and what they buy are often treated as an extension of their policies and morals.

A tale of two (or three) houses

The Cruz family’s lack of a vacation home speaks to the way Ted Cruz has chosen to present himself throughout his political career, particularly in the wake of his failed 2016 presidential bid and the weeks leading up to his unexpectedly competitive Senate reelection bid.

Ted and Heidi Cruz want readers to know that they haven’t benefited financially from his political career. If anything, they’ve made sacrifices for the benefit of the American people. Hell, they don’t even have a second home! This soft-focus profile isn’t just a rare glimpse into the life of a press-shy political spouse; it’s the Cruzes’ attempt to make their family, and therefore Ted, look good in the key weeks before Election Day. (Vox has reached out to the Cruz campaign for comment but had not heard back by press time. We will update if we get a response.)

That it backfired isn’t surprising. After all, in a country where nearly half the citizens can’t cover a $400 emergency expense, lamenting your lack of a second home isn’t the best look, especially when your husband (who is already famously disliked) voted enthusiastically for a tax bill that overwhelmingly benefited the wealthy and corporations.

Cruz isn’t the only politician who has been criticized for living large — or, in this case, for having a wife who feels bad that she can’t live large enough — while supporting policies that make it harder for middle- and working-class people to make ends meet. During the 2012 presidential election, Mitt Romney was lambasted for attempting to expand the $12 million, 3,000-square-foot California vacation home he had purchased four years earlier into an 11,000-square-foot behemoth, complete with a car elevator. (And let us not forget his dressage horse, Rafalca, on which he and his wife spent an estimated $77,000 a year to house and train.) President Trump, of course, is often criticized for spending time at his Mar-a-Lago country club in Florida and his golf club in New Jersey at taxpayers’ expense.

These criticisms aren’t limited to conservative politicians. After the Vermont newspaper Seven Days reported that Sen. Bernie Sanders bought a lake house in 2016 — his third home — the democratic socialist senator was called out for allegedly failing to live up to his leftist ideals.

Collectively, members of Congress are worth at least $2.43 billion, according to Roll Call, which releases an annual report of congressional financial disclosure forms in an attempt to triangulate our elected representatives’ net worths. The median congressional net worth was $511,000 in 2018, more than eight times the median family income in 2017, which was $61,372, according to the Census Bureau. Roll Call also found that at least 50 members of Congress are millionaires.

Rachel Sherman, an associate professor of sociology at the New School for Social Research who studies the consumption habits of the very wealthy, told me these judgments about politicians’ second and third homes are less about their wealth than about whether the public perceives them as out of touch with everyday people and their needs. “I think it’s interesting, the ways in which some politicians end up being classified and represented as elite, while others don’t,” Sherman said. “It has nothing to do with how much money they have.”

This is perhaps why during the 2004 presidential election, George W. Bush, described as the candidate you could “have a beer with,” was perceived as far more down-to-earth than challenger John Kerry, who was often derided as an out-of-touch “latte liberal.” Despite Bush’s inherited wealth and New England pedigree — one family biographer described the Bushes as “the most successful political dynasty in American history” — the president was more closely associated with Texas, where he once served as governor, than with Maine, where his family’s compound is located. (To be fair, Bush was criticized for spending too much time on his Texas ranch, but not for the cost of said ranch.)

Politicians: they want us to think they’re just like us!

This perceived reliability is intentional and strategic. Politicians go to great lengths to cultivate authentic, relatable personas, often because they’re much wealthier than their constituents. Sometimes, they do this by trying to downplay their housing situations. Other times, they attempt to eat regular food like regular people, only to expose themselves as rich weirdos who eat KFC with a knife and fork.

Lawmakers have also been known to brag about their less-than-ideal living quarters in Washington. Dozens of members of Congress, including South Dakota Rep. Kristi Noem, Kentucky Rep. Andy Barr, and House Speaker Paul Ryan, have boasted about sleeping in their offices. Senate Minority Leader Chuck Schumer and Illinois Sen. Dick Durbin were known for sharing a home with former California Rep. George Miller. (Miller owned the home and sold it after retiring in 2014.)

Politicians’ attempts to seem down-to-earth also extend to their sartorial decisions. In 2016, Roll Call wrote about the $100 Carhartt jacket politicians don when they want to “pretend to be normal people,” often in campaign ads. (Kerry once wore it, but it didn’t quite work.) That same year, Business of Fashion reported on the stylists who are tasked with making politicians look competent and put-together but not too fancy. “You cannot spend a lot of money,” stylist Corey Roche told the website. “I have never seen, except for Donald Trump, a [male] politician wear a Hugo Boss or an Armani Suit.”

These tricks are well-documented, which may be why Heidi Cruz’s inelegant attempt to seem just like you and me so clearly backfired. Plenty of Americans work 70-plus-hour weeks, as she told the Atlantic she does, but very few households bring in as much money as one helmed by a senator and a Goldman Sachs investment manager. Quartz calculated the Cruzes’ annual income as somewhere around $474,000 per year, not including Ted’s book royalties, any annual bonus Heidi would have received at Goldman, or assets from stocks and other investments. The median income in Texas, for what it’s worth, was $56,565 in 2016.

It’s true that compared to other lawmakers, Ted Cruz isn’t exactly rich. The senator’s net worth, estimated by Roll Call as somewhere around $200,000, makes him the 332nd-wealthiest member of Congress. It’s likely that Heidi was comparing her family’s economic situation to that of her peer group instead of the average American. Even if the Cruzes can afford to buy a second house somewhere, this logic goes, they may not be able to afford the home they want.

“People tend to compare themselves to people who are around them,” Sherman told me. “This is a thing that politicians always do — they never recognize how wealthy they are, and they always want to seem like they are of the people, regardless of how much they get paid. But if they’re making somewhere around half a million dollars a year, they’re certainly hovering around the 1 percent, even if that number varies from year to year.”

Ultimately, all this talk of what politicians spend their money on only serves to obscure what their policies would mean for the average American’s economic situation, particularly in a time of rising income inequality.

“It doesn’t matter whether Ted Cruz has a second home or can afford a second home, by whatever definition you want to use for what it means to be able to ‘afford’ a second home,” said Sherman. “What matters is, are the policies that he’s advocating going to help or hinder the vast majority of people from being able to have a roof over their heads, have enough to eat, and have health care?”

It’s clear when it comes to Cruz — who voted for a tax bill that experts said will only exacerbate income inequality, whose proposed health care policy would have forced people with chronic illnesses to pay more for access to health care than everyone else, and who once called the existence of a minimum wage “bad policy” — that his policies would hurt, not help, working people.

In other words, even if his family can’t afford a second home, in some cases his policies make it harder for Americans to keep their first.

The head of US broadcasting is leaning toward pro-Trump propaganda. Biden would fire him.
Why Elizabeth Warren is losing even if all your friends love her
The rigging of American politics
The movement to make workers’ schedules more humane
The online board game Dominion is the only thing keeping me sane during coronavirus
Vote-by-mail is not full of fraud, despite Trump’s debate claims