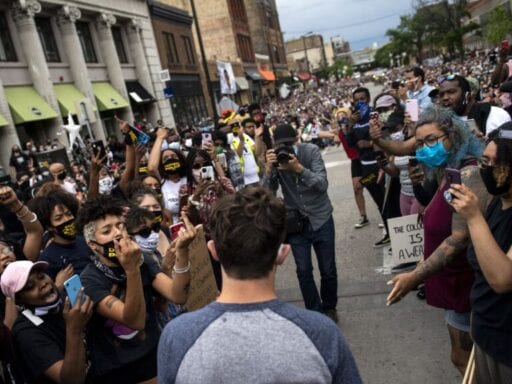 Minneapolis Mayor Jacob Frey leaves after coming out of his home to speak during a demonstration calling for the Minneapolis Police Department to be defunded on June 6, 2020, in Minneapolis, Minnesota. | Stephen Maturen/Getty Images

Defunding the police used to be a niche, radical argument. Now it’s a rallying cry for activists wanting drastic change.

Protesters from Minneapolis drove Mayor Jacob Frey out of a rally Saturday, chanting “Shame! Shame!” after he rejected calls to defund the police.

It was a striking moment that illustrated just how much the national conversation has changed in the nearly two weeks of protests over the death of George Floyd, who was killed on May 25 by a Minneapolis officer who knelt on his neck. What was once a niche, radical argument — defund the police — has become a rallying call for protesters who want drastic changes that will dismantle a system they see as racist and ineffective.

While most Americans don’t support cutting police budgets (according to a Yahoo/YouGov poll conducted during the early days of the protests), officials are now being forced to at least contend with these arguments. That includes Frey, who had campaigned on a platform of police reform before he was elected in 2017. He was confronted with the question during a rally he visited on Saturday: When a woman on stage gave him a microphone to answer whether or not he’d defund the Minneapolis Police Department, he answered, “I do not support the full abolition of the police.”

Demonstrators booed Minneapolis Mayor Jacob Frey out of a rally on Saturday after he declined to commit to defunding the police. Read more about the protests in the U.S. here. https://t.co/zHv8ocIPXj pic.twitter.com/8WPMnyFXjP

Later, in an interview with the New York Times, Frey said he still supported a “deep structural reform of a racist system” such as prohibiting the police union from collective bargaining. It’s a move that, according to one study, could reduce violent police misconduct, but is far from what activists are seeking.

Some of the activists’ demands have been met: Following Floyd’s death, the University of Minnesota, Minneapolis Public Schools and the Minneapolis Park and Recreation Board terminated their relationships with the police department.

For Minneapolis activists supporting the abolishment of the police, however, this isn’t enough.

MPD150, a community organization in Minneapolis, wrote on its website that police departments need to be abolished because the system is inherently flawed: “It’s not just that police are ineffective: in many communities, they’re actively harmful. The history of policing is a history of violence against the marginalized.”

The transition would be gradual, according to MPD150; resources and funding will need to be strategically moved from the police to community-based models of safety.

“A world without police would look like safety that is controlled and is led by our community, that focuses on transformation and transformative justice,” Kandace Montgomery, director of Black Visions Collective and founder of the Minneapolis chapter of Black Lives Matter, told the Intercept. “A world without police means that everybody has what they need to survive and what they need to live healthy lives. It means we have the money that we need for education, health care, housing, workers’ rights.”

Mayor Jacob Frey may not support defunding the police, but the movement isn’t entirely rejected by city officials. Activists have at least four out of 13 Minneapolis City Council members on their side.

Council member Jeremiah Ellison — who has been an outspoken critic of the police’s response to the protests, according to the Star Tribune — first tweeted on Thursday, “We are going to dismantle the Minneapolis Police Department. And when we’re done, we’re not simply gonna glue it back together. We are going to dramatically rethink how we approach public safety and emergency response.” Other members, including City Council President Lisa Bender, joined Ellison’s call for defunding the police shortly after.

We are going to dismantle the Minneapolis Police Department.

And when we’re done, we’re not simply gonna glue it back together.

We are going to dramatically rethink how we approach public safety and emergency response.

Although the council will likely not discuss the idea until later this year or next, City Council member Steve Fletcher shared an outline of what the future would look like without the police in a Time op-ed.

“We had already pushed for pilot programs to dispatch county mental health professionals to mental health calls, and fire department EMTs to opioid overdose calls, without police officers,” he wrote. “We have similarly experimented with unarmed, community-oriented street teams on weekend nights downtown to focus on de-escalation. We could similarly turn traffic enforcement over to cameras and, potentially, our parking enforcement staff, rather than our police department.”

These calls for radical reform aren’t welcomed by all Minneapolis residents.

“What does that even mean? Then who provides the public service of policing? I don’t even know how to answer that,” Steve Birch, who chairs the neighborhood council of the predominantly white Linden Hills area, told the New York Times.

But it’s not just Minneapolis facing demands from activists to dismantle their police departments. Los Angeles Mayor Eric Garcetti said he’d cut up to $150 million from the police budget and invest in marginalized communities instead. Meanwhile, staffers of New York City Mayor Bill de Blasio signed an open letter to their boss demanding a $1 billion cut from the police department’s budget of $6 billion.

More significant reform will likely be an uphill battle for activists, considering the historically strong support for law enforcement officers. The YouGov poll, which was conducted from May 29 to 30 among 1,060 US adults, found that only 16 percent of Americans want to defund the police. Meanwhile, 65 percent opposed cutting funding for police departments. This could change, however, as protests continue — especially among white Americans: in a Democracy Fund + UCLA Nationscape Project survey, those who had a favorable impression of police dropped from 72 percent to 61 percent following Floyd’s death.

In his op-ed, Fletcher acknowledged that “reform can be daunting, even scary” but still invited readers to “reimagine what public safety means.”

“The whole world is watching,” he wrote. “We can declare policing as we know it a thing of the past, and create a compassionate, non-violent future.”