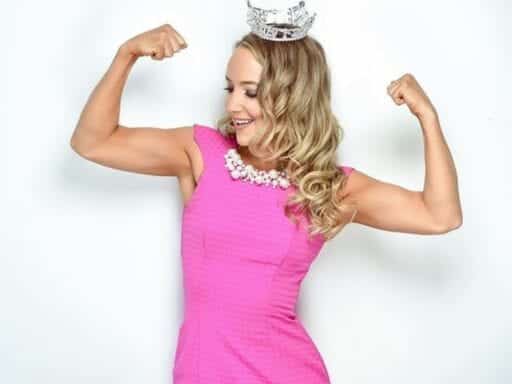 A sexual assault survivor, Maude Gorman took a stand over a joke about the cancellation of the Miss America swimsuit competition.

A beauty queen has turned in her tiara after a skit mocking the #MeToo movement was featured in the final moments of the Massachusetts Miss America competition.

Maude Gorman, 24, announced in an Instagram post that she had resigned her title as Miss Plymouth County after the June 30 event featured an unexpected skit that lamented the demise of the Miss America swimsuit competition by referencing the #MeToo movement.

In the skit, which was reportedly unscripted and unauthorized by pageant authorities, a beauty queen tells a person dressed as God that she doesn’t understand why the swimsuit pageant had to end. “Me too, Amy,” replies God, holding a #MeToo sign.

While the joke drew uproarious laughter and cheers from the audience, Gorman, standing backstage, was horrified.

When she was 13, Gorman was raped by three adult men; she says it took three years for her to open up about the experience. While competing in the Miss World circuit in 2015, she won the title for the state of Massachusetts, and used that platform to speak out about her status as a survivor of sexual assault. This year, she was almost through the final competition for the title of Miss Massachusetts — a stepping stone to the Miss America pageant — when politics once again found its way onstage.

Gorman described the moment she heard the joke to the Boston Globe as “heartbreaking.”

“In that moment, everything collapsed right in front of me,” she said. She later announced on Instagram that she’d resigned her title in response, declaring, “As both a survivor, and advocate for victims rights and sexual violence on a whole, I refuse to stand idly by and simply ‘let this go.’”

Today, I officially resigned from the title of Miss Plymouth County 2018. While I’m grateful for the opportunities that @missamerica creates for young women, I am also internally conflicted; as the #metoo movement was mocked on stage during the final competition of Miss Massachusetts. As both a survivor, and advocate for victims rights and sexual violence on a whole, I refuse to stand idly by and simply “let this go”. Instead, I will stand up for every individual who has ever had the courage to speak out; and for every person who felt liberated by the #metoo movement. I will not allow ANYONE to take away that empowerment and liberation, or make it anything less than what it is: AMAZING. #metoo #missplymouthcounty #nomore #rainn #surviveandthrive

Speaking to NBC Boston on Saturday, she added that she felt “betrayed” by the joke. “To mock a movement that has empowered survivors to stand up is inappropriate, and especially a women’s empowerment organization, should be unacceptable.”

The Miss Massachusetts organization apologized for the incident on Facebook and stated that “the skit was not in the script and was not authorized by the board. Moving forward, we will review all content with future emcees and other participants prior to our show to be sure offensive or potentially offensive content is not allowed.”

A further apology from the skit’s writer on Monday claimed that the joke was intended to be a “nod to the #MeToo movement, not a knock on it.”

The controversy over the incident, and Gorman’s resignation, has overshadowed the news that competition winner Gabriela Taveras is the first woman of color in history to win the title of Miss Massachusetts.

Though the move by the Miss America organization to end the swimwear competition has garnered praise nationally, at the state level, the decision has been controversial. Many local qualifying pageants are still requiring women to compete in the swimwear activity.

Writing for Vox, former Miss America Mallory Hagan said that the swimsuit competition engendered an “intense internal battle over my self-image. Someone or something was always reminding me that my body wasn’t good enough.”

She also noted that when she finally won, “the year I spent fulfilling my duties as Miss America had absolutely nothing to do with how my body looked. Instead, I used my body to bring awareness to the issue of child abuse by advocating on behalf of organizations focused on the issue.”

Like Hagen, Gorman had used her platform as a crown winner to bring awareness to a subject close to her. But a beauty queen speaking out about sexual assault isn’t always a popular message.

“I think society blames victims,” Gorman told the Globe in 2015. “I’m trying to remove that blame. My goal is to be that light at the end of the tunnel for those who feel stuck in the darkness.”

2 winners and 3 losers from the LGBTQ presidential forum
Americans have fewer kids than they say they want. Alaska has a solution.
Who are the #HotGirlsForBernie?
What is HBO Max? And what isn’t it?
Poland had some of the strictest abortion laws in Europe. They just got even stricter.
“There should be zero discrimination”: Joe Biden spoke in defense of transgender rights at Thursday’...