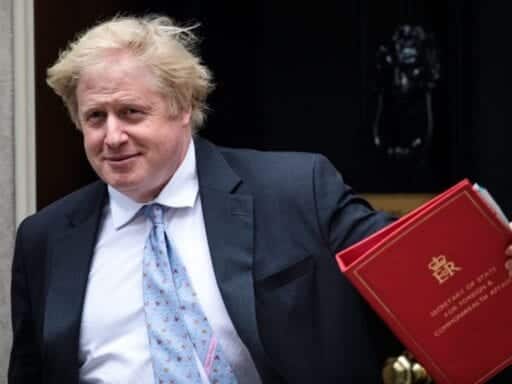 Here’s your small guide to a huge problem.

A huge political fight has erupted in the UK government over Brexit — Britain’s controversial decision to break away from the European Union — and it could bring down Prime Minister Theresa May.

In the last 24 hours, three members of May’s cabinet — Foreign Minister Boris Johnson, Brexit Minister David Davis, and the minister for the Department for Exiting the EU, Steve Baker — quit the government in protest over May’s handling of negotiations with the European Union.

Here’s what’s going on: In June 2016 the UK held a referendum on whether to stay in the EU or cut ties with the political and economic bloc.

Pro-Brexit advocates made seven main arguments for why the UK should leave the EU. The key ones were that their country could no longer control its borders and that it put more money into the EU than it received. Leaving the EU, so their argument went, would allow Britain to regain its sovereignty and economic independence.

The result: Fifty-two percent of the British public voted to leave. “Brexit,” the “British exit” from the EU, would take place on March 29, 2019.

Then came the hard part: negotiating a Brexit with EU leaders.

May came to power shortly after the Brexit vote, promising to be a steady hand in the negotiations. She even brought into her government pro-Brexit politicians, including Johnson, Baker, and Davis.

Over time concern grew that May would agree to a “soft Brexit.” That’s the nickname for a model based on Norway’s relationship with the EU: It isn’t in the union but still has access to Europe’s single market. To follow that model, the UK must mostly allow the free flow of goods, services, money, and people.

That’s a no-go for the pro-Brexit crowd, who prefer a “hard Brexit,” like Canada’s relationship with Britain. Under that model, the UK-EU relationship would be governed by international law — not EU law — and Britain could restrict immigration. Basically, the UK would be just another country with no special ties to the EU, just like Canada.

May’s cabinet is deeply divided between those two camps, and time is running out for her to present her terms to the EU.

Last Friday May sequestered her entire cabinet to hammer out a compromise. After a 12-hour meeting, May emerged with a plan the group “collectively” agreed on: The UK would seek a “free-trade area” with the EU for industrial and agricultural goods, preserving its access to EU markets and governed by a “common rule book.”

But there wasn’t a consensus: For Johnson and other hardcore Brexiteers, the plan was too soft. “It seems to me we’re giving too much away, too easily,” Davis said.

So they quit in protest.

Now, May’s entire party is in turmoil, with some members threatening to challenge her leadership if she doesn’t change course. Which means that the UK prime minister may be about to fall — just days before President Donald Trump is set to meet with her.

The Washington Post’s correction about Trump’s phone call to a Georgia official, explained
Italy puts the entire country under travel restrictions to curb the spread of coronavirus
Corporate America takes away Trump’s toys
The turf war between Trump’s top 2 health care officials, explained
Public transit in the US is already underfunded. The pandemic has made it worse.
The US won’t run out of food during the coronavirus pandemic