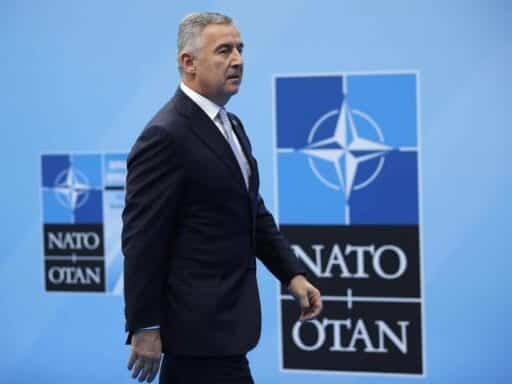 President Trump said that the small country is full of “very aggressive” people.

The country of Montenegro is not happy about being called “aggressive” by President Donald Trump.

On Thursday, it clapped back.

Montenegro released an official statement making clear that it is a peace-loving country that also can defend itself and that the country is not, as Trump had suggested in an interview on Tuesday, about to start World War III.

“Montenegro is proud of its history and tradition and peaceful politics that led to the position of a stabilising state in the region,” the country’s government said in the statement. As a new NATO member, the statement continued, Montenegro “contributes to peace and stability not only on the European continent but worldwide, along with US soldiers in Afghanistan.”

“In today’s world, it does not matter how big or small you are, but to what extent you cherish the values of freedom, solidarity and democracy. Therefore, the friendship and the alliance of Montenegro and the United States of America is strong and permanent,” the statement concluded.

Carlson brought up the NATO summit in Brussels last week, where the US president railed against NATO member states for not committing enough to the alliance in terms of defense spending. Trump has openly expressed his frustration with NATO many times in the past, and Carlson picked at that scab.

Here’s that part of the interview:

CARLSON: Membership in NATO obligates the members to defend any other member who has been attacked. So let’s say Montenegro, which joined last year, is attacked: Why should my son go to Montenegro to defend it from attack? Why is that?

TRUMP: I understand what you’re saying. I’ve asked the same question. Montenegro is a tiny country with very strong people.

CARLSON: Yeah, I’m not against it — or Albania.

TRUMP: No, by the way, they have very strong people — they have very aggressive people. They may get aggressive, and congratulations, you’re in World War III. Now I understand that — but that’s the way it was set up. Don’t forget, I just got here a little more than a year and a half ago. But I took over the conversation three or four days ago and said, “You have to pay.”

Montenegro is a small country in the region of Eastern Europe known as the Balkans. It has a population of just 629,000 people — about the same amount as Louisville, Kentucky. It’s the newest country to join NATO — it joined in June 2017 — and hopes to soon join the European Union as well.

And, perhaps most importantly, it is not “aggressive” by any stretch of the imagination.

“I have no idea where Trump gets the idea Montenegro is ‘very aggressive,’” Ivo Daalder, a former US ambassador to NATO, told the New Yorker’s Robin Wright on Wednesday. He continued:

It’s been independent twelve years and never even came close to starting any war. In fact, two years ago, months before Montenegro would accede to nato, a Moscow-backed coup attempt sought to prevent it from joining the Alliance. If there’s been aggression, it’s come from Moscow, not Montenegro.

Ranko Krivokapic, Montenegro’s former president of Parliament and current leader of the country’s Social Democratic Party, told the BBC on Wednesday in response to the NATO comments that Trump was “the strangest president in the history of the United States.”

Krivokapic also seemed underwhelmed by Trump’s performance or knowledge of Montenegro, saying, “Foreign policy is not his big thing.”