Most candidates run to the center in the general. Biden is moving left. 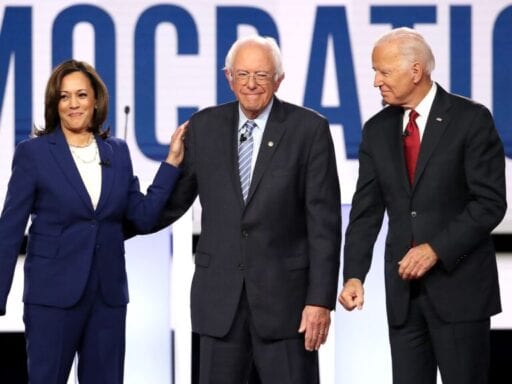 In 2016, Hillary Clinton tapped Tim Kaine to be her vice president. In 2008, Barack Obama chose Joe Biden. In 2004, John Kerry named John Edwards. In 2000, Al Gore ran with Joe Lieberman. What did all these picks have in common? They were all to the right of the candidate atop the ticket — each of them was meant, at least in part, to mollify voters uncomfortable with either the ideology or the identity of the Democratic nominee.

Former Vice President Joe Biden’s decision to run alongside Sen. Kamala Harris breaks the trend. Harris is, by any measure, to Biden’s left. The New York Times describes Harris as “a pragmatic moderate.” But according to the DW-NOMINATE system, which measures the ideology of members of Congress by tracking what they vote for and who they vote with, Harris has been one of the most liberal members of the Senate since arriving in 2017, sitting reliably alongside Sens. Elizabeth Warren, Bernie Sanders, and Cory Booker atop the rankings. In Biden’s final term in the Senate, he was the 26th most liberal member — and the Democratic Party was significantly more conservative then.

It is conventional wisdom that Democrats run to the left during primaries and the center during general elections. Biden is bucking that cliché. Biden ran to the center in the primary, but he’s been steadily shifting his policies and personnel left ever since.

Harris is, it should be said, a liberal, not a leftist. Her record as a prosecutor angered many on the left (I highly recommend reading German Lopez’s deep dive on that record), she’s close to big donors in Silicon Valley, and her decision to back away from Sanders’s Medicare-for-all bill during the primary deepened the mistrust. But Harris’s record as a prosecutor is far more liberal than Biden’s record on criminal justice issues, and her ultimate health care plan, which obliterated employer-based insurance entirely, was the most ambitious proposal put forth besides Medicare-for-all — and was, again, well to Biden’s left, as were most of her other policies (including, crucially, filibuster reform, where she’s said she’d end the rule to pass climate change legislation).

Harris is also the first woman of color ever on a major presidential ticket. She would be the first woman, full stop, to serve as vice president. Within the complex narrative that governs campaign politics, Harris came to be seen as the “safe” choice for Biden. But that says more about how American politics has changed than it does about who she is and what she believes. At the turn of the century, a Black, Indian American woman with one of the most liberal voting records in the Senate wouldn’t have been priced in by pundits as the safe pick.

But adding Harris to the ticket fits Biden’s strategy more generally. Rather than declaring victory for the grand forces of moderation after beating Sanders, Biden spun up a series of unity task forces charged with finding common ground between the two campaigns across six issue areas. The process pushed Biden’s agenda left, most notably on climate change.

In a less high-profile, but just as consequential announcement, the Biden transition team — the team that will do the work of staffing his administration, if he wins — was stocked with staffers with deep ties to the more left-leaning, diverse wings of the Democratic Party, like Gautam Raghavan, chief of staff to Rep. Pramila Jayapal, the co-chair of the House Progressive Caucus; Angela Ramirez, the executive director of the Congressional Hispanic Caucus; and Julie Siegel, a senior adviser to Warren on economic policy.

Quietly, Biden is pushing his own agenda and potential administration left. “As the Democratic nominees, Bill Clinton, Al Gore, John Kerry, Barack Obama, and Hillary Clinton did not make a major effort to appoint progressives,” says Waleed Shahid, communications director for the left-leaning Justice Democrats. Biden’s been different, and there are a few reasons for it.

Biden’s long profile in American politics has given his campaign cover. “They feel they have room because Biden is seen as a moderate,” says David Axelrod, who served as Obama’s chief strategist. And polls back that up: 26 percent of voters see Biden as moderate, while only 15 percent say the same about Trump.

Biden isn’t seen as a radical, a socialist, or even a particularly progressive politician. That arguably cost him some excitement in the Democratic primary, where candidates with sharper ideological profiles dominated social media and got the loudest applause at debates. But in the general election, it’s given Biden room to get a bit more radical, to build bridges to the more socialist wing of the party, and to normalize a more progressive agenda, without fearing some of the backlash that other candidates might receive.

More importantly, Biden is changing because the country is changing. In 2018, for the first time, a majority of Americans under age 15 were nonwhite. Decades of economic failures have radicalized younger voters against the economic consensus that Biden himself helped buttress. The Movement for Black Lives has forced an overdue reckoning with systemic racism in America. Covid-19 has led to Depression-era levels of unemployment. Biden isn’t moving left because he discovered Gramsci in his 70s. He’s moving left because that’s necessary to keep up with the politics and needs of the moment.

None of this is to say Biden is as far left as leftists would prefer. Nor that Harris is the pick they wanted — though she was the most popular pick among Democrats and independents. But Biden and Harris are politicians skilled at reading the room and sensing the moment. In recent decades, national Democratic politicians have read the room and shifted right, acting as if the pressure in American politics came from whiter, more southern, and more conservative voters. Now they’re shifting left, feeling pressure from a rising, diverse generation of voters furious with the failures of the past, and looking for something different in the future.

“Both Biden and Kamala Harris have somewhat floating ideologies, like a balloon tied to a rock where the rock is the Democratic Party consensus,” says Shahid. “Harris being to Biden’s left, as senator and 2020 candidate, means that progressives and social movements have moved that rock substantially since the Obama era.”

Biden has always said he intends to be a “transition candidate,” and it’s increasingly clear that he understands that transition as leading to a more diverse, liberal America.

Joe Biden has won. Here’s what comes next.
8 experts on why the Paul Manafort jury doesn’t have a verdict yet — and what it might mean
Spending more time outside this winter? Here’s how to stay warm.
“Dying by blood or by hunger”: The war in Ethiopia’s Tigray region, explained
Watch: Biggest moments from Bill Barr’s confirmation hearing
The timeline of Trump’s decision to withhold aid to Ukraine is increasingly suspicious