Most people are bad at arguing. These 2 techniques will make you better. 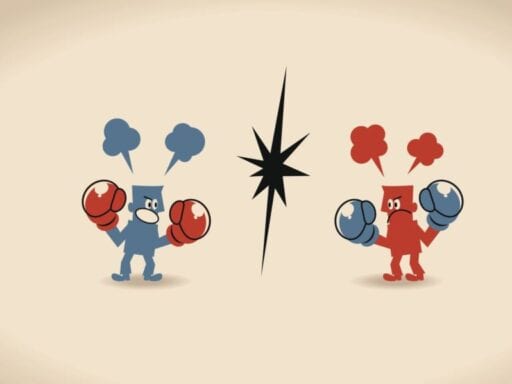 Anyone who has argued with an opinionated relative or friend about immigration or gun control knows it is often impossible to sway someone with strong views.

That’s in part because our brains work hard to ensure the integrity of our worldview: We seek out information to confirm what we already know, and are dismissive or avoidant of facts that are hostile to our core beliefs.

But it’s not impossible to make your argument stick. And there’s been some good scientific work on this. Here are two strategies that, based on the evidence, seem promising.

1) If the argument you find convincing doesn’t resonate with someone else, find out what does

The answer to polarization and political division is not simply exposing people to another point of view.

In 2017, researchers at Duke, NYU, and Princeton ran an experiment where they paid a large sample of Democratic and Republican Twitter users to read more opinions from the other side. “We found no evidence that inter-group contact on social media reduces political polarization,” the authors wrote. Republicans in the experiment actually grew more conservative over the course of the test. Liberals in the experiment grew very slightly more liberal.

Whenever we engage in political debates, we all tend to overrate the power of arguments we find personally convincing — and wrongly think the other side will be swayed.

On gun control, for instance, liberals are persuaded by stats like, “No other developed country in the world has nearly the same rate of gun violence as does America.” And they think other people will find this compelling, too.

What both sides fail to understand is that they’re arguing a point that their opponents have not only already dismissed but may be inherently deaf to.

“The messages that are intuitive to people are, for the most part, not the effective ones,” Robb Willer, a professor of sociology and psychology at Stanford University, told me in 2015.

Willer has shown it’s at least possible to nudge our political opponents to consider ideas they’d normally reject outright. In 2015, in a series of six studies, he and co-author Matthew Feinberg found that when conservative policies are framed around liberal values like equality or fairness, liberals become more accepting of them. The same was true of liberal policies recast in terms of conservative values like respect for authority.

So, his research suggests, if a conservative wanted to convince a liberal to support higher military spending, he shouldn’t appeal to patriotism. He should say something like, “Through the military, the disadvantaged can achieve equal standing and overcome the challenges of poverty and inequality.” Or at least that’s the general idea.

In a more recent effort Willer and a co-author found, in a nationally representative sample, that conservatives would be more willing to support a hypothetical liberal candidate for president if that candidate used language that reflected conservative values. For instance, conservatives who read that the candidate’s “vision for America is based on respect for the values and traditions that were handed down to us…” were more likely to say they supported him than when the candidate’s message was framed with liberal buzzwords.

How to sway the other side: Use their morals against them

Willer’s work is based on moral foundations theory. It’s the idea that people have stable, gut-level morals that influence their worldview. The liberal moral foundations include equality, fairness, and protection of the vulnerable. Conservative moral foundations are more stalwart: They favor in-group loyalty, moral purity, and respect for authority.

What moral foundations theory tells us, however, is that these messages don’t translate from one moral tribe to the other. “You’re essentially trying to convince somebody who speaks French of some position while speaking German to them,” Willer says. “And that doesn’t resonate.”

Willer cautioned that it’s still extremely difficult to convert a political opponent completely to your side, even with these techniques. “We found statistically significant effects,” he says. “They’re reliable. But in terms of magnitude, they are not large.”

The chart below shows how well the moral reframing worked for each policy area in Willer’s study. To be clear, there’s only so much that reframing in terms of values can do: It can’t turn an anti-Obamacare conservative into a proponent, but it can soften his stance and get him to listen to counterarguments.

Still, it’s significant that Willer found any results at all, considering the difficulty political scientists usually have in getting partisans to sympathize with the other side on issues such as health care, military spending, same-sex marriage, and English as an official language.

Willer’s conclusions may not heal American democracy, but they could help, let’s say, lower tensions in a heated family argument.

Here’s an example. If you’re trying to convince a conservative of the merits of kneeling for the national anthem in protest, emphasize the traditional values around political and religious freedom, Willer suggests, “arguing that the founding fathers were deeply concerned with protecting our rights to social protest.” (Though he hasn’t used this argument in his tests, directly.)

Feinberg has followed up on the work with an experiment using moral reframing during the 2016 presidential election. In his study, when he framed an argument against Trump in terms of loyalty (a conservative moral foundation), conservative participants reported they were less likely to support him.

“For instance, the loyalty message argued that Trump ‘has repeatedly behaved disloyally towards our country to serve his own interests’ and that ‘during the Vietnam War, he dodged the draft to follow his father into the development business,’” Feinberg and his co-author write in the study.

Feinberg found a similar effect when framing an argument against Clinton in terms of fairness, a liberal moral foundation. The fairness argument mentioned “while so many Americans have suffered during the recent recession that the Wall Street Banks helped cause, Clinton has accepted millions of dollars from them in exchange for giving a few speeches” and claimed Clinton “is willing to sacrifice fairness and equality to achieve her own goals.’”

Liberal participants who were shown this argument felt colder toward Clinton, and indicated they were less likely to vote for her.

2) Listen. Your ideological opponents want to feel like they’ve been heard.

Willer and Feinberg’s work suggest there’s a way to change minds on policy. But what about on prejudice? How can you effectively argue a person out of a prejudicial opinion? Because as Vox’s German Lopez explains in great detail, simply calling people racist is a strategy sure to backfire.

In 2016, the journal Science published a remarkable bit of insight: It’s possible to reduce prejudice, and sway opinions on anti-transgender legislation, with one 10-minute conversation. What’s more, the researchers found that the change of heart can last at least three months and is resistant to anti-transgender attack ads.

It worked because the canvassers in the study did a simple thing: They listened.

Dave Fleischer, a longtime political organizer, calls it deep canvassing. The key to it is that Fleischer has the voter do most of the talking.

In talking about their own lives, the voters engage in what psychologists call “active processing.” The idea is that people learn lessons more durably when they come to the conclusion themselves, not when someone “bitch-slaps you with a statistic,” says Fleischer. Overall, it’s a task designed to point out our common humanity, which then opens the door to reducing prejudice and changing opinions.

Here’s a video example of deep canvassing. It’s of a real voter and a canvasser from the Leadership LAB, a program of the Los Angeles LGBT Center, in March. The woman in the video starts off ambivalent on transgender issues. But through deep canvassing, the activist is able to turn her around.

Specifically, the canvassers ask the voters to recall a time when they were discriminated against. And then toward the end of the conversation, the canvassers nudge the voters into thinking about how that experience can relate to the plight of transgender people. The idea is that people learn lessons more durably when they come to the conclusions on their own.

In the video above, notice how the voter starts to come around on the issue when the canvasser asks if she’s ever been on the receiving end of discrimination. She talks about being picked on at work and feeling different. He responds by telling his own story of being discriminated against for being gay. It’s a real heart to heart between strangers.

And in that moment, the canvasser points out that a transgender nondiscrimination law would help people who feel discriminated against at school or work.

This technique has only been proven to work with identity issues, like transgender rights. It’s hard to say how to adapt it for talking a relative out of their support for gun control.

But the main message of the strategy couldn’t hurt to try: Listen to people, get them to think about their own experience, and highlight your common humanity.

You might at least get your foot in the door to a breakthrough.

Republicans remove Rep. Steve King from committee assignments for defending white nationalism
Joe Biden’s new plan to end the opioid epidemic is the most ambitious in the field
Former Kentucky Gov. Matt Bevin’s 428 pardons are upsetting both Democrats and Republicans
The department store’s false promise to Black America
Trump said the opioid epidemic would go away. It didn’t.
Ball State University party shooting: what we know