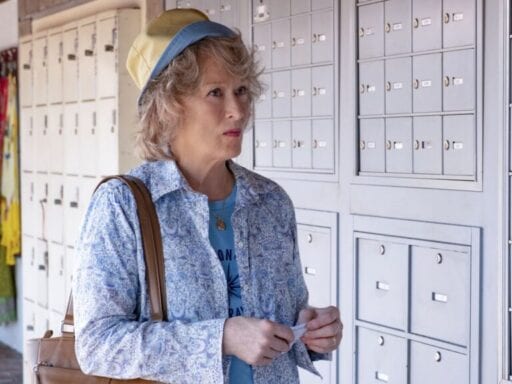 Meryl Streep leads a star-studded cast in an uneven, but illuminating, tale of real-life corruption, directed by Steven Soderbergh.

The premise: Many of the world’s most wealthy and powerful people manage to stay that way in part because of legal loopholes and offshore banks that allow them to evade paying taxes. Their behavior has widespread and devastating effects, as the world learned in 2016 when the leaked Panama Papers were published. But the Panama Papers comprise more than 11 million documents, and they’re really confusing to parse. So let’s make a bleak comedy about them!

What it’s about: Scott Z. Burns (writer of Contagion and The Informant! and director of the upcoming Adam Driver film The Report) wrangled this messy corruption story in the script for The Laundromat, which his frequent collaborator Steven Soderbergh then directed. The film unspools like a series of interconnected vignettes, all centered on the massive trove of leaked documents that surfaced in 2016 and exposed corruption and tax avoidance around the world.

The story is narrated by Jürgen Mossack and Ramón Fonseca (played by Gary Oldman and Antonio Banderas), who act as our guides to the complicated regulatory and economic matters that enabled massively wealthy individuals to avoid paying taxes on their money, often by hiding it in offshore accounts. In real life, Mossack and Fonseca owned the world’s fourth-largest provider of offshore financial services; it closed down in 2018 largely due to the revelations from the Panama Papers, and the pair spent a few months in jail.

The Laundromat aims to show how loopholes in various countries’ tax codes were exploited and sleight-of-hand tricks were employed by the rich, and how they affected ordinary people — like a woman (Meryl Streep) who lost her husband in a tour boat accident and then was unable to collect insurance payments because the boat company’s liability coverage came from a fraudulent shell company. A bevy of stars bring the stories to life, including Streep, Oldman, Banderas, James Cromwell, Sharon Stone, David Schwimmer, Matthias Schoenaerts, Will Forte, Chris Parnell, Jeffrey Wright, Rosalind Chao, Nonso Anozie, and many more.

The Laundromat is unwieldy at times, and its final scene is truly befuddling. But it’s worth watching not just for its bitterly entertaining explanation of a densely confusing matter but also the way it illustrates a larger problem. Most average people don’t just lack the means to avoid taxes; they don’t even know there’s a way that other people do. And yet the confusing, labyrinthine methods that the extremely wealthy can use to conceal their cash has far-reaching repercussions; The Laundromat reveals how.

Critical reception: The Laundromat has a score of 58 on Metacritic. In the Chicago Tribune, Michael Phillips writes, “Soderbergh and Burns remain exceptionally well-matched collaborators. They’re after just enough human interest to make us care, and just enough socioeconomic outrage to make us seethe — some of us, anyway.”

How to watch it: The Laundromat begins streaming on Netflix on October 18.

Vox Sentences: “I’m with him”
The haunting of Girlstown
Former eBay employees allegedly used spiders and swingers to cyberstalk newsletter authors
Democrats are moving past neoliberalism — and to this view instead
What we know about how Trump’s “law and order” message is going
Vox Sentences: Jury selection begins for one of Me Too’s biggest cases