Netflix’s The Politician is a mess. But it may be a deeply meaningful one. 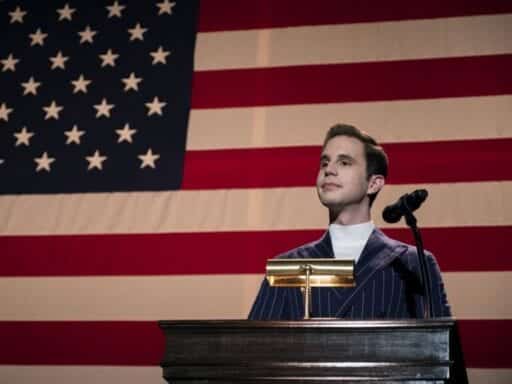 The new comedy-drama marks Ryan Murphy’s Netflix debut and may be the Rosetta Stone we need for his work.

Late in her new book God Land, author Lyz Lenz articulates the particular relationship that people who grew up in the Midwest have to the power structures of the Midwest as well as anybody I’ve ever seen.

Lenz’s book is an attempt to understand the results of the 2016 election — and the dissolution of Lenz’s own marriage in the wake thereof — by researching the decay of the Midwestern church. She hoped to discern why these stalwart heralds of tiny farm towns are hollowing out like so many other things in the region where I grew up and where Lenz still lives.

She is trying to get at the fight-or-flight response that a lot of people like me felt after growing up there, but also at how the attitudes of people who still live there have calcified in the wake of all the social change sweeping along in urban areas. Refreshingly, she isn’t trying to educate urbanites about the Midwest. She’s trying to puncture the bubble that her own neighbors in Iowa live in, a bubble convinced of its own righteousness.

In a chapter about how the appearance of “morality” in these rural communities is of paramount importance, but also how that appearance is coded as white, cis, straight, and male, Lenz writes:

I know what it is like to live in a place where visible difference is ground down through rejection and isolation. Homogeneity is a comfort only for those for whom it is built. For the rest of us, it is destabilizing. … How good is a place, how big are its horizons, if there isn’t room for everyone?

This may seem like an odd way to introduce Ryan Murphy, Brad Falchuk, and Ian Brennan’s new TV show, The Politician, a Netflix fantasia on American politics, high school movies, and the current cultural moment. But then consider that those three men were the three creators of Glee and you may begin to see why this show made me think of Lenz’s book.

Murphy and Brennan grew up in the Midwest (Murphy in Indiana; Brennan in Illinois). They know this territory all too well. And though The Politician takes place in 2019 Santa Barbara, it might as well be set in a Midwestern small town of the past.

In fact, The Politician might be the Rosetta Stone to understanding all of Murphy’s work, from Nip/Tuck to Glee to American Horror Story to American Crime Story. It’s a show about what it means to be queer and have to stifle that part of yourself to survive. It’s a show about what happens when an entire culture decides that some voices matter more than others, even if those voices belong to empty suits.

It’s also kind of a mess.

The Politician is a straight-up ’90s throwback of a Gen-X political message, but it’s about present-day Gen Zers

The Politician is Murphy’s first show to debut on Netflix instead of FX or Fox, his longtime TV homes (however, it’s not his first show under his new exclusive deal with Netflix — instead, it’s one of the last shows he produced under his old deal with Fox).

In form, it most resembles Glee, with acidic comedy about high schoolers that pushes subject matter envelopes while remaining more or less family friendly. There’s no overt sexual content beyond kissing, but there’s plenty of implied sexual content. There’s a large ensemble cast, featuring everybody from superstars (Gwyneth Paltrow) to Broadway stars making their big TV-starring debut (Dear Evan Hansen’s Ben Platt) to total unknowns who are, nevertheless, perfectly cast (the agreeably icy Julia Schlaepfer). There are wild tonal swings from arch irony to utter sincerity, sometimes within single lines of dialogue. And there are occasional musical numbers. You don’t hire Ben Platt and not ask him to sing.

Except The Politician doesn’t really resemble Glee — not really. The conceit of the show is that each season will be about a different campaign run by its title character, Payton Hobart (Platt), presumably on his way to the presidency. (In season one, he runs for student body president.) The show’s real premise becomes more and more clear as the first season rolls on and the show sheds plot points as quickly as it raises them, spoofing everything from Gone Girl to disaffected white male voters. As always with Murphy, Falchuk, and Brennan’s collaborations (which also include Scream Queens), there’s a vague sense of visiting Willy Wonka’s chocolate factory while somebody in your tour group reads their Twitter feed out loud and another person sings Sondheim.

What’s oddest about The Politician is that it has almost no interest in actual politics. Payton — who occasionally seems to be a rough analog for gun control activist David Hogg and at other times seems like Alexandria Ocasio-Cortez reimagined as an anodyne white man — makes occasional stabs at caring about political issues. He wants students to be safe from gun violence but he’s also really worried about plastic straws. He seems to have arrived at his political positions because they are advantageous, not because the issues he’s chosen to focus on are deeply important to him. And yet other characters earnestly intone several times that he wants to make the world a better place.

He seems at all times like a projection of a politician and not a real person. Then again, The Politician’s opening credits, in which he is literally built out of wood and filled with little tchotchkes that symbolize good, old-fashioned American gumption, have already suggested as much. He’s an automaton, an empty suit.

I suspect Payton’s emptiness is part of the point, which I’ll get to in a second, but first we have to deal with the obvious read of this show, which is that it’s is a very ’90s takedown of how politics doesn’t really matter and no matter who you vote for everything’s just gonna stay the same, maaaaaan. The Politician is Gen-X to a T, a product of an era when economic prosperity and the winding down of the Cold War suggested that history itself was at an end. It’s an easy cynicism that doesn’t bother to examine its own convictions.

But the irony of its ’90s outlook is that The Politician at least nominally takes place in the present day. Payton’s campaign for student body president being built so heavily around gun violence suggests as much, and his opponent briefly seems poised to win the election after her running mate promises to bring Drake to campus for a concert. So there’s inherent tension with the fact that the most prominent political figures of the generation currently in high school aren’t empty-suit politicians: They’re activists like Hogg and Greta Thunberg, who are railing against the systems they believe are destroying the world.

The moment The Politician crystallized for me comes in its fifth episode, “The Voter.” It’s a format-breaking episode that leaves behind the increasingly fractious student body president race to focus on one undecided voter, a bored white teenaged boy named Elliott (the very funny Russell Posner).

Elliott appears in just this one episode, but Murphy, Falchuk, and Brennan (who co-wrote, with Brennan directing) quickly sketch in his life. His family doesn’t have much money. His parents are overbearing. His little sister is a perfectionist. He plays games on his phone with the sound cranked up, and he masturbates constantly. (The only political issue he cares about is getting a restroom at school where he can jerk off without being bothered.) He stares down the shirts of his female classmates as he makes his way past them to a middle seat at a school assembly.

Payton and his opponent, Astrid (Lucy Boynton), home in on Elliott because his vote is still up for grabs. “The Voter” suggests that they only care about him because of his vote, that their respective relationships with Elliot are strictly utilitarian. But Payton occasionally does care, in his way. He’s an adoptee who was born poor and ended up in a rich family (Paltrow plays his mom — though she appears on the show less than its ads would have you believe), and he wants to make sure students like Elliott feel heard, whatever that means.

None of this matters: Elliott ultimately reveals to his family that he didn’t vote at all because it wouldn’t change anything. After all of the show’s regulars cover themselves in flop sweat just to cater to him, he opts to ignore them entirely because he’s so used to being catered to that it just seems annoying for that behavior to be cranked up to 11. The handful of moments when he does visibly react (in the form of a vaguely irritated gawp) involve other people trying to get him to turn down the volume on his game, or a debate between Payton and Astrid taking time to call out everybody who’s not a straight white guy like Elliott. He doesn’t care about the election because he doesn’t have to care. By being unreachable, he made himself the only person worth caring about.

It was after that episode that I started to think about how practically everybody on this show is queer, usually explicitly.

This number includes Payton, who seems to be bisexual. His public relationship is with a girl named Alice (Schlaepfer), and he exhibits occasional sexual chemistry with other women in his school. But his great love — the one that transcends even the boundaries of life and death — is River (David Corenswet), a former political opponent in the student body election and his friend. River is hyper-sincere where Payton is calculating. And in the series’ first episode, he dies by suicide.

The Politician is all over the place and whatever political message it hopes to convey is hopelessly muddled, but its real target is what Lenz writes about in God Land: the way that forced homogeneity prompts a kind of split consciousness in those who practice it, a split consciousness that reflects itself at every level of society, all the way up to the presidency. The Politician is not really about politics, except for how politics is a manifestation of some deeper American illness.

The series is about Payton, but it’s also about all of the people around him — people of color and women and trans people and queer people and people with disabilities. They struggle with mental illness and social ostracization. They are passionate where Payton is a little too practiced. But it’s Payton’s practiced air that makes him acceptable to society at large, so long as he can keep the part of himself that’s attracted to men under wraps (easy enough, now that his great love River is dead).

That Payton is empty is warmed-over political commentary, but it’s also the point of this show. Emptiness is the natural consequence of a world that asks people to erase themselves in the name of a meaningless social project. But, paradoxically, Payton’s ability to erase a vital part of himself might be a means to decreasing the need for that erasure.

Emptiness and erasure have always been Murphy’s great theme — he’s especially interested in the way that America promises so much to a sliver of its population and asks everybody else to contort themselves to reward people who believe they are inherently great as opposed to lucky beneficiaries of certain DNA. Even when The Politician is flailing all over the place (and I haven’t even mentioned the Munchausen by proxy subplot that for some reason seems to be a parody of Hulu’s The Act), its heart is tapped into the pain of living in a world full of rich white people and forcing down everything that makes you a little bit different. Like Murphy’s best shows, The Politician is about how sad being happy can be.

The Politician is streaming on Netflix.