Now that the UK is stockpiling food, maybe it’s time to admit Brexit is a mistake? 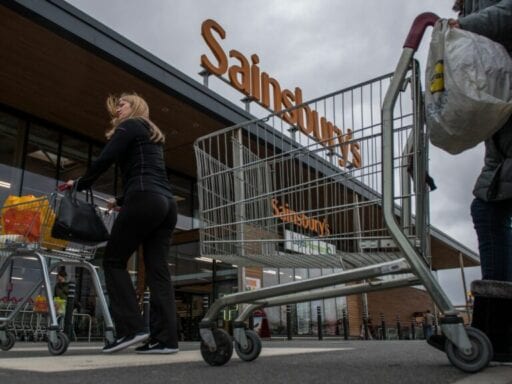 Brexit has become a bizarre, macabre spectacle of national self-sabotage.

Prospect magazine’s Jonathan Lis has a piece titled “36 things that will happen if Britain crashes out of Europe with no deal” that I, an American who has been casually but not obsessively following Brexit, found extremely helpful.

Let’s back up a second: In 2016, the British people narrowly voted to exit the European Union. British Prime Minister Theresa May has proposed maintaining a free trade deal with the EU after leaving, but hardliners in her party like Boris Johnson and Jacob Rees-Mogg have strenuously objected, leaving it an open question whether she’ll remain in office or, if she does, whether Britain will be able to leave the EU with any kind of deal to cushion the blow.

So what happens if May leaves without that kind of deal? That’s what Lis’s piece addresses. Here’s one of its extremely normal paragraphs:

4. Food will rot. We import about half of our food and feed, and 70 per cent of that comes from the EU. The bosses of Calais and Dover have warned of 30-mile tailbacks and possible infrastructural collapse. Experts have already warned that supermarkets will soon run out of supplies. (Hence the stockpiling.)

Stockpiling! A cursory look through the British press reveals that the entire nation of the United Kingdom is acting like a town on the eve of a massive blizzard. “Stockpiling is the talk of Britain!” the Economist proclaims, while raising doubts about whether people are actually piling up the food or just talking about it to be trendy. The Guardian asks readers, “What would you stockpile to prepare for no-deal Brexit?” and columnist Ian Jack observes, “As Brexit looms, stockpiling food seems the only sensible response.”

Dominic Raab, the new Brexit secretary, has explained that he doesn’t really think the government needs to do much (“It would be wrong to describe it as the government doing the stockpiling”), but the Guardian’s James Ball explains that the alternative, private sector stockpiling, is all but impossible. The UK’s food sector is so tightly integrated with continental Europe that it relies on daily shipments of food, and UK food suppliers don’t have the inventory or warehouse space to store reserves in anticipation of a hard Brexit.

In the event of a no-deal Brexit, food imported to the UK would be hit by big tariffs (about 22 percent on average) as well as non-tariff barriers on food that could reach as high as 29 percent.

But in the near term, as Lis says, planes would stop flying: “Aviation is currently governed by the Single European Sky, European Aviation Safety Agency and aviation single market. You fall out of those, and pilots and planes lose their certification overnight.” EU agreements even govern UK/US air travel.

The end of a customs agreement with the EU means more inspections for ships coming in with food as well; British Retail Consortium leader Richard Pennycook, hardly a disinterested party but still, has said, “It is likely that we will see food rotting at ports.”

When it’s hard for any food to arrive in the first place, the UK will have to rely on the half of its food it produces domestically (and maybe some additional food it would ideally export but now cannot). That means shortages and massive price hikes, with the poorest Britons probably the worst off. “There have also been suggestions that the Ministry of Defence [sic, British] has been looking into how the armed forces could be deployed to carry out various civil functions, including using RAF jets to transport food supplies across the country,” the Guardian’s Pippa Crerar reports.

The country won’t literally starve. But hunger will increase. Poor people will skip more meals. (One in four Britons already say they do.) Middle-class families will see their standard of living fall as more of their budgets are eaten up by food costs; currently Britons spend 11 percent of their income on food (the poorest spend 16 percent), and that share is sure to increase after a hard Brexit. In the initial shock of leaving, without enough stockpiling, there could be shortages affecting people across the income spectrum.

This is the point in the story where it’s necessary to take a step back and acknowledge that this is madness. An extremely rich developed country is very close to deciding to voluntarily deprive itself of its food supply because 51.89 percent of voters in a referendum two years ago voted the wrong way.

And in spite of the fact that the country is having public discussions about the propriety of using the fucking air force to airdrop food to people, no one in power wants to stop this process! Both May and her main rival, the Labour Party’s Jeremy Corbyn, have decided to treat the referendum result as reflecting the will of the people and have rejected the idea of doing another vote, even though government officials are now questioning if the country will have enough food to feed itself and enough medicine to stock its hospitals.

I like to think of myself as a small-d democrat, but this is why responsible countries rely on representative institutions, not referenda. An 18th-century French viscount arguing for the preservation of absolute monarchy couldn’t have imagined a democratic straw-man sillier than, “51 percent of the public should be allowed to vote to destroy everyone’s food supplies if they feel like it.” (The viscount would instead think he should do the starving himself, because French nobility and what have you.)

The most bizarre thing about watching this from afar is the sense that it’s inevitable, that there’s no turning back. You can turn back! May could decide to hold a vote on just canceling the whole thing, and if a majority of Parliament goes along with it, it would be over. Would it end her political career? Probably. Would a majority of Parliament vote for it? Likely not — but again, that’s exactly what’s bizarre and upsetting about all this. It’s like watching a guy slowly demolishing all the houses on his block with a sledgehammer because he lost a Twitter poll, and all his neighbors are like, “Yep, that seems appropriate.”

Look, I’m an American. I know exactly who we elected president and what he’s up to, and I’m in no position to judge anyone. But I want to lay down a marker and say that it is entirely possible for rich countries to not purposely destroy themselves. And that while RAF supplying food made total sense in 1940s Holland, Adolf Hitler is dead, the war is over, and Great Britain is perfectly capable of supplying adequate amounts of food to citizens. It should maybe do that.